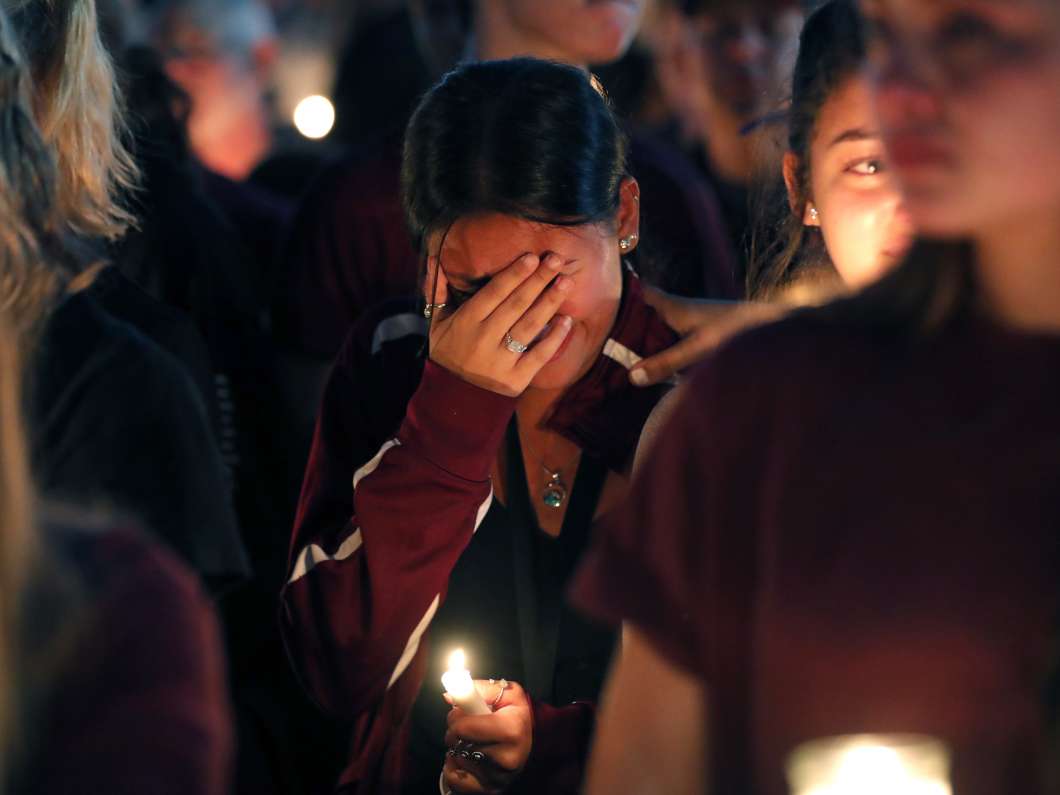 A woman cries during a candlelight vigil for the victims of Wednesday's shooting at Marjory Stoneman Douglas High School, in Parkland, Fla.
Image credit: Gerald Herbert

Thousands gathered for a candlelight vigil in Parkland, Fla., to honor the memory of the 17 people killed on Wednesday when a gunman opened fire at a local high school.

There were tearful remembrances at the Pine Trails Park Amphitheater, as well as open sobbing, and at one point, some in the crowd erupted into a chant of “No more guns!”

According to police, a former student, 19-year-old Nikolas Cruz, arrived at the Marjory Stoneman Douglas High School armed with an AR-15 rifle and “countless magazines” of ammunition. He began his shooting rampage outside the school and then moved inside, killing 17 students and staff members.

“This is our home and this is where we will not be intimidated by evil,” senior class president Julia Cordover said after reading the names of the 17 people killed as others observed a moment of silence.

“We need to come together and be there for each other,” she said.

Frank Guttenberg, the father of 14-year-old Jamie Guttenberg, who was killed on Wednesday, expressed anguish over his inability to protect his daughter.

“I sent her to school yesterday, and she was supposed to be safe,” he said choking back tears. “My job is to protect my children, and I sent my kid to school.”

As Guttenberg began to cry, the crowd shouted back, “We love you!”

Parkland City Commissioner Grace Solomon told the crowd that she planned to go to the state capital, Tallahassee, next week and invited others to join her to press for action on guns.

“And we need every mom and every dad and every kid to show up there and stand together. Not just Parkland. I mean everyone. I mean the parents of Sandy Hook. It’s time to say enough. This is enough,” Solomon said to applause.

One attendee, freshman Hunter Frybergh, 14, said he survived the attack by hiding in a closet at the school.

“I can’t get a shake out of my voice … I [had a] nightmare last night where the shooter had a gun to my head,” he tells North Country Public Radio’s Brian Mann. “I just stared at my wall all night.”

Even so, Hunter’s father, Jason Frybergh, says he thinks it is too late for new gun restrictions to work.

Chicago Cubs first baseman Anthony Rizzo, who grew up in Parkland and was a 2007 graduate of Marjory Stoneman Douglas High School, spoke at the event.

“I played on those fields, I went to those classes. I studied in those classrooms. The same school we saw on videos yesterday for all the wrong reasons,” he said, his voice quavering with emotion.

In a tweet on Thursday, Rizzo said: ” [O]ur country is in desperate need for change. I hope In this darkest of times back home this brings everyone together and we can find love. You’re all in my prayers.”