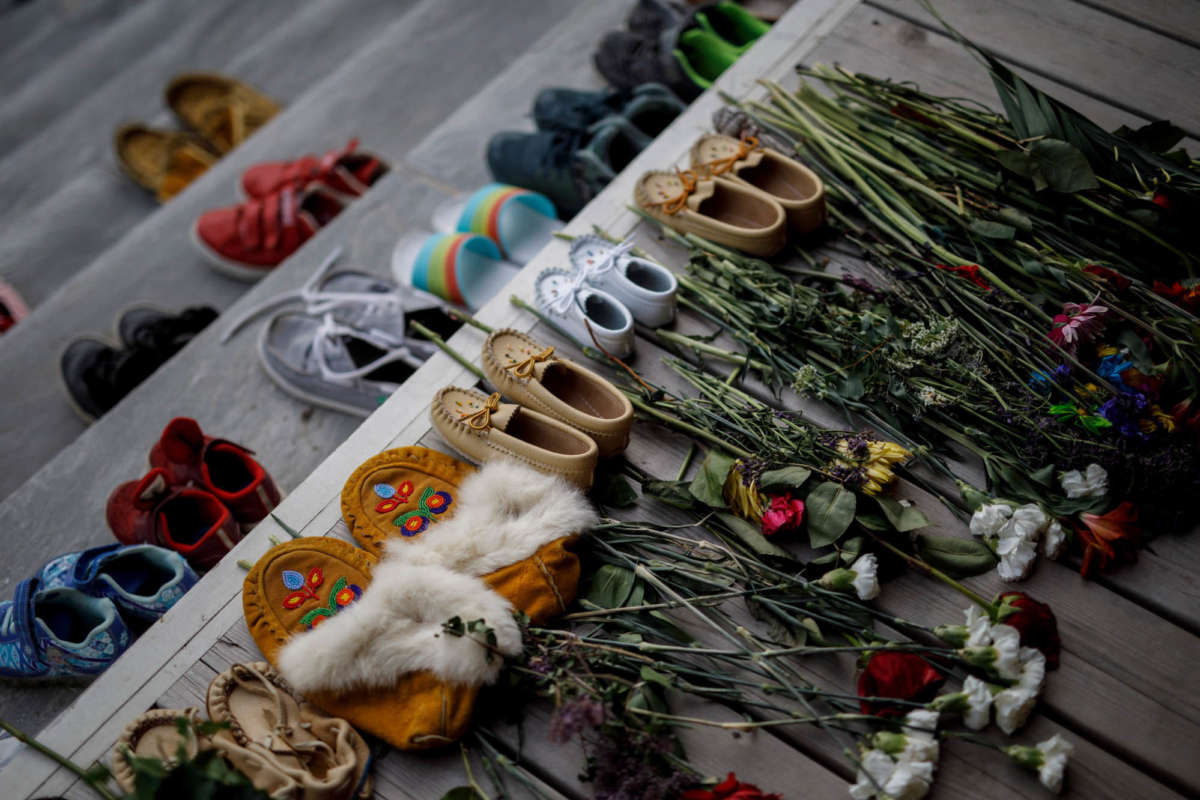 Flowers, shoes and moccasins sit on the steps of the main entrance of the former Mohawk Institute, which was a residential school for Indigenous kids, in Brantford, Ontario. The memorial is to honor the children whose remains were discovered in unmarked graves in recent months in Canada.
Image credit: Cole Burston

BRANTFORD, Ontario — Rows of kids’ shoes and stuffed animals fill the front steps of the former Mohawk Institute Residential School in this city about an hour and a half’s drive southwest of Toronto. Visitors have created this memorial for Indigenous children whose remains were found buried on the grounds of other former boarding schools across Canada.

Geronimo Henry, 84, is a regular fixture at the site, helping tidy up the tributes and speaking with visitors.

“If you guys got any questions about the school, I went to this school from ’42 to ’53 — 11 years,” he tells a couple on a recent afternoon.

“My dad’s a survivor,” says one of the visitors, Chris Buswa, “So was my grandma. She passed away some years ago. So, I just wanted to come and see it, you know, just feel its presence.”

From the 1800s up to the 1990s, more than 150,000 children went through the system of 139 institutions across Canada, run by churches and the federal government. Children from Indigenous families were in some cases forced to attend boarding schools to assimilate them into white Canadian society. It became notorious for neglect and abuse and was deemed by Canada’s Truth and Reconciliation Commission to have amounted to cultural genocide.

In May, an Indigenous group announced the discovery of the remains of 215 children buried at a former boarding school in the province of British Columbia. That and a series of further discoveries of unmarked graves have shocked many Canadians, drawing the public’s attention to this heart-wrenching chapter of recent history. Last week, Canada marked its first-ever National Day for Truth and Reconciliation, commemorating the victims and survivors of Indigenous residential schools. Now, communities across the country are preparing to search sites using ground-penetrating radar, expecting they will likely discover more remains.

The Truth and Reconciliation Commission has documented more than 6,000 student deaths at boarding schools; its chair recently estimated the number could be as high as 25,000.

A search of the oldest residential school

One of the searches will be around the former Mohawk Institute — the oldest and longest-running residential school in the country. Originally founded in 1828, it was first operated by the New England Company, then by the Anglican Church and finally by the federal government as a day school, until it closed in 1970.

Earlier this year, a group called the Survivors’ Secretariat formed to organize the search for buried remains at the Mohawk Institute as well as carry out historical research, commemorations and other activities. Henry takes part in the group’s weekly meetings of survivors.

“We’re going to start right from the school and do the perimeter of the school,” Henry says, describing the planned search.

Henry, from the Cayuga Nation, does not remember any children dying when he lived in the Mohawk Institute, but he remembers disappearances and a lot of runaways.

“Because I don’t think anyone liked it here,” he says. “And there was just like stories going around or whatever: ‘Somebody’s buried over there,’ or ‘It’s haunted over there’ or something. ‘Don’t go there. There’s evil spirits,’ you know, stuff like that.”

Six Nations of the Grand River

The land surrounding the Mohawk Institute belongs to Six Nations of the Grand River, an Indigenous territory that’s home to members of the Mohawk, Onondaga, Oneida, Seneca, Tuscarora and Cayuga peoples.

The space where the school once stood is now a museum, the Woodland Cultural Centre, dedicated to the region’s Indigenous peoples, known in Canada as First Nations.

“I’ve heard stories over the years saying like, ‘I know that that person got sick, they went to the infirmary. They never came out of the infirmary,'” says Janis Monture, executive director of the cultural center, which opened in 1972.

She says there are records of about 50 student deaths but no complete list.

“There’s also recorded pregnancies. What happened to all those babies? So, it makes you wonder: OK, there’s a lot of unanswered questions,” she says.

Monture, who is from Six Nations of the Grand River, started giving tours of the facilities when she was 15. She learns a lot from survivors who return to visit, sometimes with their families, she says.

During a recent tour for NPR, she pauses outside the boiler room in the basement, noting a loud hum from the equipment inside. “It is known as a place where a lot of abuse happened — sexual abuse more because of the noise, so they couldn’t hear,” Monture says.

Parties involved with planning for the search include survivors and representatives of different communities whose children were sent to the school, as well as police and coroner’s office, which are advising on how to conduct and document the work so that information can be used in any future criminal proceedings.

The team has secured ground-penetrating radar for the search. “I just got a text that our machines are now at the police station,” says Kimberly Murray, the former executive director of the Truth and Reconciliation Commission, who was brought in by Six Nations to coordinate the search. “We purchased them. We are training people on how to operate them.”

Between the grounds of the school and farm fields where children were sent to work, she says there will be about 500 acres to scan.

But the ground-penetrating radar equipment does not work well in snow and cold. “We’re here in Canada,” Murray says wryly. “So, the focus right now is where we’ll start for the fall right now and what we can accomplish before the winter comes. And over the winter, we will focus on plotting and planning for the spring search.”

Scanning is just the beginning

The search of the former Mohawk Institute is just one of what will likely be many others across Canada, which will take place with federal financial support.

“The technology is something that has validated and corroborated what the testimonies and survivors said,” says Mary Ellen Turpel-Lafond, director of the Indian Residential School History and Dialogue Centre at the University of British Columbia.

Turpel-Lafond, who was previously the first Indigenous judge appointed in Saskatchewan, says those testimonies and existing records on children’s deaths, combined with forensic searches, could lead to criminal prosecutions.

At the Mohawk Institute, Murray, who is a member of the Kahnesatake Mohawk Nation, says the ground radar scan is the first step in a longer process.

“The decision of what to do if we do find potential burial grounds, burials of children, around whether to exhume the children’s bodies or not, is something that the survivors haven’t actually had full discussions of yet, nor has the community,” she says.

Henry, the residential school survivor, says that according to some traditional beliefs, without appropriate funeral rites, spirits can’t leave their remains.

“If we do find our unmarked graves here, at least what we can do for them is that we can give them a decent burial,” he said.

Henry was involved in the original lawsuit against the Canadian government that led to the formation of the Truth and Reconciliation Commission in 2008. He says he appreciates meeting visitors who have come to acknowledge the children who lived and died in the Mohawk Institute.

“It makes me feel my time is worth it, you know, coming up here. We’re getting through to them,” he says. “Hopefully these spirits are feeling what they’re feeling. [The visitors are] in mourning.”

The ground-penetrating radar work will get underway in mid-October.