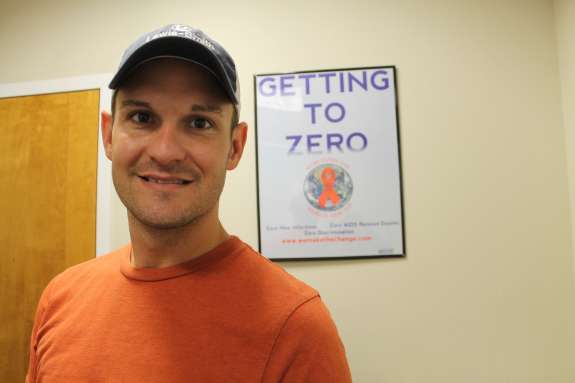 Will Blair was diagnosed with HIV May 20, 2014. The last year has been a roller coaster.

Will Blair can describe his family in three words: southern, conservative, Baptist.  “I’m kind of the black sheep,” Blair said.

Blair was 17 and living in rural Lake County when he came out as gay to the grandparents raising him. When he was 32, he had to come out a second time, as HIV positive.

As Blair reflected on the events of last year, he choked up.

“It’s hard dealing with letting the people close to you know,” Blair said. “Because some people, even the ones close to you, even though they’re talking to you and you hear the words coming out their mouth, you know that behind what they’re saying is judgment.”

Blair knew his lifestyle had risks. He had multiple sexual partners, and he didn’t always use a condom. That’s why he got tested every three months. He would tell partners he was HIV negative and the date of his last test.

Because of the frequent testing at The LGBT Center of Orlando, he knew the man who tested a drop of his blood May 20, 2014. Blair had even served him cheddar biscuits at Red Lobster.

Blair was reactive for HIV antibodies. It was a 99 percent sure diagnosis. Blair’s tester stepped out for air, and Blair grabbed the paperwork, the specimen and bolted.

Florida has overtaken California as the state with the most new HIV infections. Nearly half of those new cases are among men who have sex with men. And gay men are the most likely to be unaware they have the virus.

Blair spent that first week like a zombie, asking tough question. He wanted to pretend the diagnosis didn’t happen.

Then he went to Orlando’s Hope and Help, an HIV testing and counseling center. There he met Steve Addona, a peer mentor for the newly diagnosed. Addona isn’t just a peer mentor. At 62, he’s a living, breathing HIV history lesson.

Steve Addona is a peer mentor for newly-diagnosed men with HIV. He contracted the virus in San Francisco in the ’80s.

In 1979, Addona moved to San Francisco. It was the summer after the assassination of gay politician Harvey Milk. The Castro district was a center for gay culture and gay rights.

Utopia, Addona said. But within a few years, trouble invaded paradise: a mysterious virus was killing gay men all over the city.

Addona remembers seeing an ex at the super market. He was gaunt and pale, with the telltale purple lesions. Soon, his ex died. Then the funerals became weekly occurrences. And then it was every few days.

“We were in the middle of a sexual revolution,” Addona said. “You knew in the back of your mind your number would come up, but you didn’t exactly know when.”

Steve Addona before he contracted HIV.

Addona knows he contracted HIV in San Francisco, but the virus laid dormant. Addona thought he could leave the virus behind, but it followed him to West Hollywood and, eventually, Orlando.

By the mid-1990s, Addona began hearing about a cocktail of drugs that was keeping people with HIV alive. So far, it’s worked for Addona, and for Will Blair as well.

Blair spoke at ReStart, a bimonthly meeting of HIV positive men in Orlando.

“I was at the doctor this week, and had my results of my labs from switching from Triumeq to Stribild,” Blair said. “And I’m undetectable. Everything’s good.”

Blair wants to become a peer mentor like Addona. It’s a big goal for Blair, the capstone of a pivotal year.

He’s on medication. His T-cell counts are in the range of someone without HIV. His viral load is undetectable, which means his chances of passing the virus to his boyfriend of five months is nearly impossible.

That’s right: Blair is seeing someone. That was one question he kept asking in the week where he acted like nothing had happened. Would I ever find love?

“It was a rollercoaster of a year but I learned a lot,” Blair said. “And I know that I’m going to continue to live as normal and healthy a life as I did before, if not even better.”

There have been downs as well. A bout with pneumonia put him in the hospital for five days. He’s not working; his car broke down. We meet at a coffee shop in downtown for an interview. He doesn’t have a place to live.

Blair has more bad days than good. But he hopes that talking about his status will bring others out of the darkness, out of the stigma, to get tested, and to get in treatment.