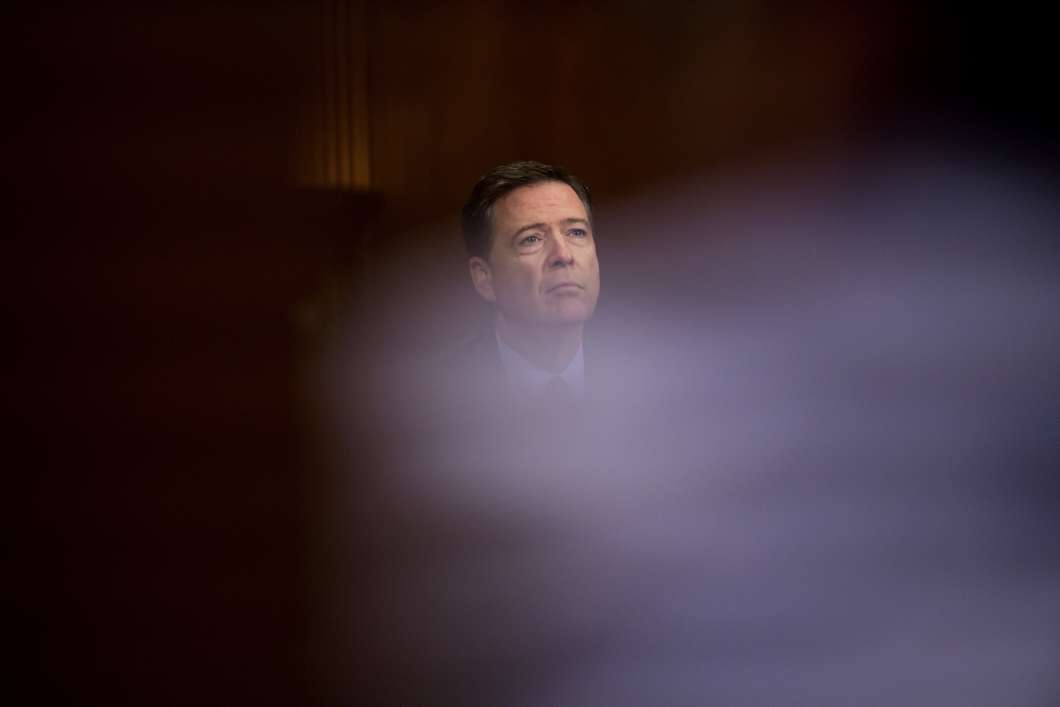 Former FBI Director James Comey's opening statement for the Senate Intelligence Committee hearing on Thursday shows that the president wanted it publicly known that he was not under investigation.
Image credit: Eric Thayer

Former FBI Director James Comey will testify before the Senate Intelligence Committee on Thursday that President Trump did ask him for “loyalty” at a January dinner and later told him alone in the Oval Office that he “hope[d] you can let” the investigation into former national security director Michael Flynn “go.”

The opening statement from Comey, released by the committee less than 24 hours before his testimony, effectively confirms many of the bombshell reports from The New York Times and The Washington Post over the past month that have raised the question of whether the president tried to interfere in the ongoing investigation into Russia’s meddling in the 2016 election and whether Trump campaign associates colluded with Moscow.

Comey was fired by Trump last month, and the president later said the Russia investigation factored into his decision. Comey will testify that in March, Trump called him and asked what the FBI could do to “lift the cloud” around him and his administration involving Russia.

The former FBI director details an awkward Jan. 27 dinner with Trump, at which the president asked him whether he wanted to stay on as FBI director. The president later said he expected “loyalty” from Comey despite the FBI’s independence from the White House:

My instincts told me that the one-on-one setting, and the pretense that this was our first discussion about my position, meant the dinner was, at least in part, an effort to have me ask for my job and create some sort of patronage relationship. That concerned me greatly, given the FBI’s traditionally independent status in the executive branch. …

I replied that I loved my work and intended to stay and serve out my ten-year term as Director. And then, because the set-up made me uneasy, I added that I was not “reliable” in the way politicians use that word, but he could always count on me to tell him the truth. I added that I was not on anybody’s side politically and could not be counted on in the traditional political sense, a stance I said was in his best interest as the President.

A few moments later, the President said, “I need loyalty, I expect loyalty.” I didn’t move, speak, or change my facial expression in any way during the awkward silence that followed. We simply looked at each other in silence. The conversation then moved on, but he returned to the subject near the end of our dinner.

And Comey confirms earlier reports, which sources had confirmed to NPR, about his solo Oval Office conversation on Feb. 14 with Trump the day after Flynn had been asked to resign after he misled Vice President Pence about his conversations with the Russian ambassador during the transition. According to Comey, Trump signaled for him to stay behind after Attorney General Jeff Sessions lingered:

The President then returned to the topic of Mike Flynn, saying, “He is a good guy and has been through a lot.” He repeated that Flynn hadn’t done anything wrong on his calls with the Russians, but had misled the Vice President. He then said, “I hope you can see your way clear to letting this go, to letting Flynn go. He is a good guy. I hope you can let this go.” I replied only that “he is a good guy.” (In fact, I had a positive experience dealing with Mike Flynn when he was a colleague as Director of the Defense Intelligence Agency at the beginning of my term at FBI.) I did not say I would “let this go.”

Comey says he immediately prepared an unclassified memo of his conversation with Trump and shared the events with senior FBI officials. However, he says he did not interpret that the president was asking him to drop the entire Russia probe:

I had understood the President to be requesting that we drop any investigation of Flynn in connection with false statements about his conversations with the Russian ambassador in December. I did not understand the President to be talking about the broader investigation into Russia or possible links to his campaign. I could be wrong, but I took him to be focusing on what had just happened with Flynn’s departure and the controversy around his account of his phone calls. Regardless, it was very concerning, given the FBI’s role as an independent investigative agency.

Comey says he did not inform Sessions about that conversation because he anticipated the attorney general would have to recuse himself from the Russia probe (which Sessions did two weeks later), nor did he talk with it about then-Deputy Attorney General Dana Boente, who was only the interim deputy. However, he did tell Sessions that being left alone with Trump “was inappropriate and should never happen. He did not reply.”

Comey says that he had “nine one-on-one conversations with President Trump in four months — three in person and six on the phone” and that he wrote memos after each of those encounters, some of which he shared with top FBI officials. In comparison, he spoke alone with President Barack Obama only twice in two years and never on the phone.

Comey’s testimony does support the president’s assertion in his termination letter to Comey that the former FBI director assured him on three occasions that he, personally, was not under investigation. However, Comey was wary of that being publicized and told Trump in a March 30 phone call:

I explained that we had briefed the leadership of Congress on exactly which individuals we were investigating and that we had told those Congressional leaders that we were not personally investigating President Trump. I reminded him I had previously told him that. He repeatedly told me, “We need to get that fact out.” (I did not tell the President that the FBI and the Department of Justice had been reluctant to make public statements that we did not have an open case on President Trump for a number of reasons, most importantly because it would create a duty to correct, should that change.)

But, according to Comey, the president did appear to press him to go even further in his final phone call with Trump before he was fired:

On the morning of April 11, the President called me and asked what I had done about his request that I “get out” that he is not personally under investigation. I replied that I had passed his request to the Acting Deputy Attorney General, but I had not heard back. He replied that “the cloud” was getting in the way of his ability to do his job.

He said that perhaps he would have his people reach out to the Acting Deputy Attorney General. I said that was the way his request should be handled. I said the White House Counsel should contact the leadership of DOJ to make the request, which was the traditional channel. He said he would do that and added, “Because I have been very loyal to you, very loyal; we had that thing you know.” I did not reply or ask him what he meant by “that thing.” I said only that the way to handle it was to have the White House Counsel call the Acting Deputy Attorney General. He said that was what he would do and the call ended.