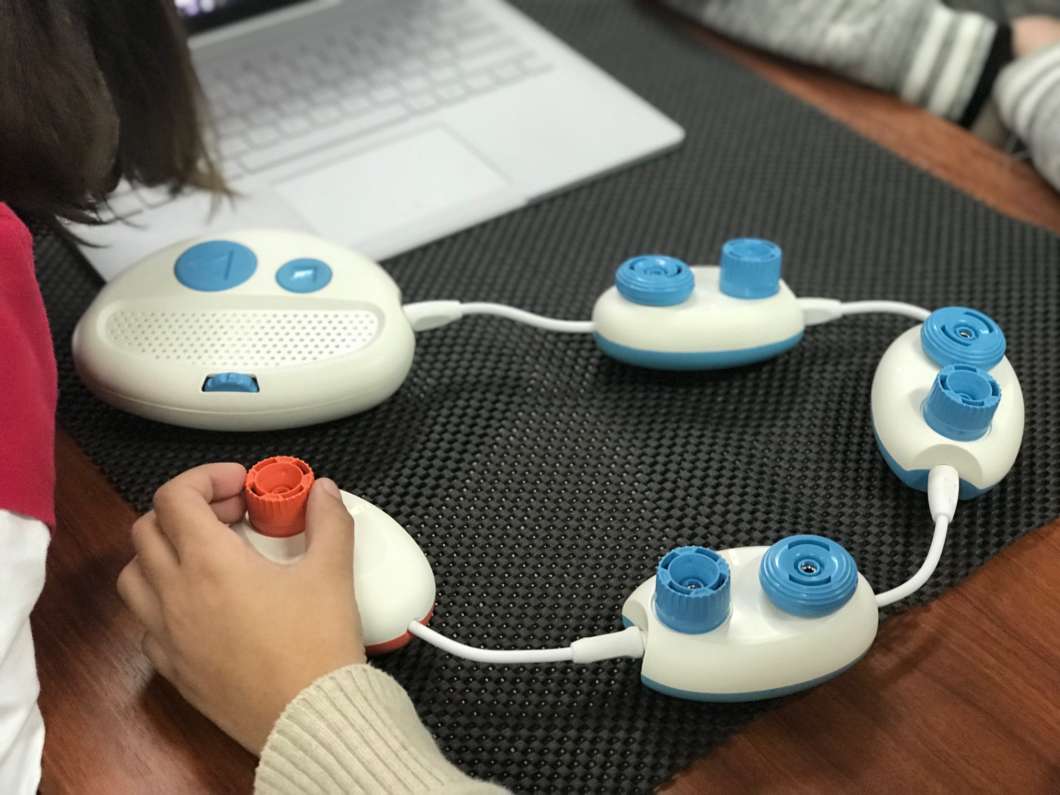 Small white pods connect together to represent a statement in a computer program. (credit: Talia Blake)

Programs that teach kids how to code are popular right now. But, what about kids who are blind or visually impaired? From the education desk this week, we take a look at Code Jumper, a new program that teaches kids basic coding skills regardless of their level of vision or experience.

“Because what’s daddy’s job? Do you remember what Daddy’s job is?” Stephen asked Grace.

“I have a visual impairment,” Grace answers.

She was born with no hands or feet and is visually impaired. But, in many ways she’s just like any other kid. Grace had a pair of black glasses sitting on her smiling face and she was still in her school uniform.

I met Grace and her dad before an event put on by non-profits Lighthouse Central Florida, which provides vision rehabilitation services, and Kentucky-based American Printing House for the Blind. The event was to demo the new Code Jumper game ahead of its debut at the Assistive Technology Association Conference in Orlando.

When I asked Grace what she thought a program like this could teach other kids. She told me, “That you can do anything if you try.”

“Yeah, what is it that we like to say in our family? Often we’ll say anything is possible. Right?” Stephen says. Grace shook her head in agreement.

Microsoft researchers in the United Kingdom developed Code Jumper to teach programming skills to children who are blind or with vision loss. And now they’re transferring the research and technology behind the program to American Printing House for the Blind.

Code Jumper is made up of a series of small white pods, about the size of a potato, each with two dials of the same color on top and one thick white wire sticking out the side. Kids connect the pods with the wires and each pod represents a statement in a computer program.

When the pods are set in the correct sequence the program creates music, or plays back a story. Letting kids know they’ve written the correct code. And if the code is wrong, the computer burps at you.

According to the National Federation for the Blind, more than 70 percent of adults with vision loss are unemployed.

Lighthouse’s Mike Fox is a software developer who also happens to be visually impaired.

“People who are blind can do this job. When I started programming, a friend of mine showed me his abilities. He was totally blind. I’m like, Wow that’s amazing, but there’s not enough people doing that,” Fox said.

Fox wishes there was a game like Code Jumper when he was growing up.

“To start off with a positive experience of, ‘hey here’s this fun thing.’ Then, later in life discover, ‘Wow, I can make a career out of something that I use

to enjoy doing just for the heck of it,” he said.

10-year-old Grace Braswell says her favorite part about Code Jumper was playing the song back. And one day she may grow up to be a computer programmer, but for now her dream is to move to Maine.

“And what are you going to do in Maine?” Stephen asked Grace.

For now, Code Jumper is only compatible with Windows computers and only available English. In the next four years, American Printing House for the Blind plans to launch the game worldwide and offer it in different languages.