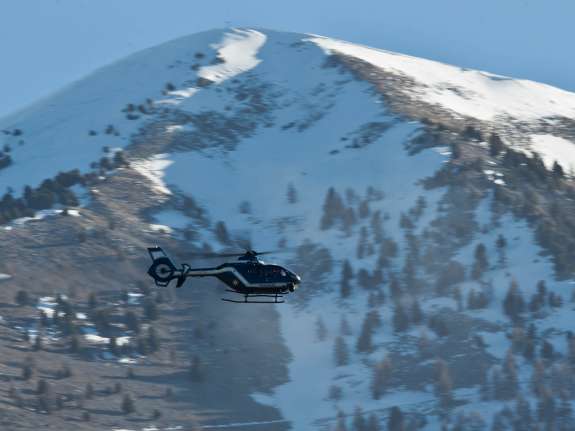 A police helicopter flies in Seyne-les-Alpes, France, on Thursday, near where a Germanwings plane crashed Tuesday. The Marseille prosecutor said the plane's co-pilot appears to have deliberately crashed the plane.
Image credit: Daniel Karmann

The co-pilot of Germanwings Flight 4U 9525 appears to have deliberately crashed the plane carrying 150 people into the French Alps after the pilot had left the cockpit, Marseille prosecutor Brice Robin said at a news conference today.

“The interpretation … that we can give at this time … is that the co-pilot through voluntary abstention refused to open the door of the cockpit to the commander and activated the button that activates the loss of altitude,” Robin said, providing often-chilling details into the final moments before the airline crashed.

But, he said: “There’s nothing showing that this is a terrorist act.” He also refused to characterize the actions as suicide.

The information was gleaned from the cockpit voice recorder, which was recovered from the crash site on Wednesday.

Robin described the conversation between the pilots at the initial part of the flight, after takeoff from Barcelona, Spain, on Tuesday as “lively, pleasant, courteous,” but he said that later, when the pilot was preparing the aircraft for landing in Duesseldorf, Germany, the co-pilot’s answers seemed “short and curt.”

Robin identified the co-pilot as Andreas Lubitz, 28, a German national. The Wall Street Journal reported that Lubitz lived in Montabaur, Germany. He had 630 hours of flying time and had joined Germanwings in September 2013, directly after training.

The vastly more experienced pilot, whose name has not yet been released, had left the cockpit apparently to “satisfy natural needs” and handed the controls to the co-pilot, Robin said. Knocks, “very violent knocks,” on the cockpit door can be heard on the voice recorder as the pilot tried to regain access, Robin said. The co-pilot can be heard breathing until final impact, he said.

“He didn’t say anything,” Robin said. “Not a single word.”

Robin said that screams from passengers can be heard moments before the final impact, but he noted: “Death was sudden and immediate” when the plane hit the mountain.

The recovery of the bodies of the passengers will likely continue until the end of next week, said Brice Robin, the Marseille prosecutor.

“There’s nothing showing that this is a terrorist act,” said Brice Robin, the Marseille prosecutor.

And, he said, he would not use the term “suicide” to describe the co-pilot’s apparent actions.

Marseille prosecutor Brice Robin identified the co-pilot as Andreas Lubitz. He did not offer more details about Lubitz, except to say he was “obviously capable of piloting the plane by himself.”

But The Wall Street Journal said Lubitz, 28, was from Montabaur, Germany.

Screams can be heard before the final impact, Robin said, adding the passengers did not realize what was happening until the final moments.

But he noted: “Death was sudden and immediate” when the plane hit the mountain.

The actions of the co-pilot of Germanwings Flight 4U 9525 have been “analyzed as willingness to destroy the aircraft,” Brice Robin, the Marseille prosecutor, said at a news conference today.

“The interpretation … that we can give at this time … is that the co-pilot through voluntary abstention refused to open the door of the cockpit to the commander and activated the button that activates the loss of altitude,” Robin said.

The co-pilot was breathing normally through the entire process. The pilot was locked out of the cockpit, Robin said. His comments were in French and translated into English on France 24.

Both pilots are German nationals, he said. The co-pilot was not on any terrorist list, Robin said.

The focus of the investigation into what caused Germanwings Flight 4U 9525 to crash in the French Alps on Tuesday has shifted to the pilots.

The plane’s captain had more than 6,000 hours of flying time, Lufthansa, Germanwings’ parent company, said. He joined the airline in May 2014, after previously having flown for Lufthansa and the German airline Condor. The co-pilot had flown 630 hours. He joined Germanwings in September 2013, directly after training.

The New York Times, The Associated Press and Agence France-Presse are all reporting that one of the pilots was locked out of the cockpit before the crash. The Times based its report on a “senior French military official” while the AP quoted “an official with knowledge of black box audio recordings” and AFP cited a “source close to the investigation.”

Reuters, meanwhile, quoted Christoph Kumpa at the prosecutors’ office in Duesseldorf, as saying “one [pilot] was in the cockpit and the other wasn’t.” He said the information came from the investigators in France.

It’s important to note here that it is unclear what that means or what part of those reports, if any, are accurate. It is also important to note that investigators have so far said sabotage appears unlikely, though they have been equally quick to point out that nothing is being ruled out.

Germanwings, in a statement, said it could “neither confirm nor deny the reports.”

A senior French military official told The Times the two pilot engaged in a “very smooth, very cool” conversation during the early part of the flight from Barcelona, Spain, to Duesseldorf, Germany. Then the audio from the cockpit voice recorder, which was recovered Wednesday, indicated one of the pilots left the cockpit and could not re-enter.

“The guy outside is knocking lightly on the door, and there is no answer,” the investigator told The Times. “And then he hits the door stronger, and no answer. There is never an answer.”

He added: “You can hear he is trying to smash the door down.”

The plane had 150 people on board – and they are all believed to have perished.