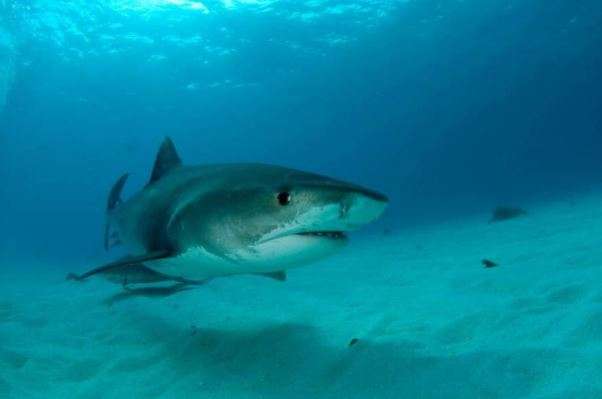 As climate change warms the oceans, one of its sturdiest predators, the tiger shark, is moving north.

In a first of its kind study that could have implications for how other ocean animals are protected, a team of researchers found tiger sharks had shifted their range north by almost 250 miles. The sharks also began migrating sooner.

“For just every one degree, these sharks are shifting about 14 days earlier into northern areas,” said Neil Hammerschlag, lead author and a shark researcher at the University of Miami Rosenstiel School of Marine and Atmospheric Science. “I was not expecting such striking results. I mean, it’s mind blowing and concerning.”

The study was based on 40 years of shark tagging data from the National Oceanic and Atmospheric Administration, as well as satellite tracking and other monitoring.

The shift means the voracious scavengers are spending more time outside restricted fishing zones from Florida to North Carolina, where they are protected from the commercial fishing industry. That leaves them even more vulnerable to fishing practices driving down their numbers.

“What we’re finding is that when waters are warming above average, tiger sharks are actually moving poleward outside of these these areas,” Hammerschlag said. “Essentially now they’re not benefiting from that protection.”

As oceans warms, how its inhabitants respond has become a growing concern. Higher temperatures have helped wilt coral reefs. In tropical waters, the UN’s International Panel on Climate Change has warned the amount of fish caught could drop by half. The intensity and frequency of dangerous marine heat waves are also expected to worsen.

In a 2018 study, NOAA forecast future ranges for more than 680 species in the Atlantic and Pacific under different carbon projection scenarios. They found nearly 500 had a medium to high chance of shifting ranges, some by more than 600 miles.

The shift, they warned, would have significant impacts on conservation efforts.

However, the study focused on future conditions. Researchers also warned that their findings provided a better glimpse at trends than specifics.

“To my knowledge, it’s kind of the first study…that’s been able to evaluate a connection between an animal’s conservation and climate change,” he said.

It also examines an animal whose range is defined only by temperature.

That leaves water temperatures as a guiding influence, driving them north in the spring and summer.

“They kind of act like snowbirds every year,” he said.

While he expected some change, Hammerschlag said the extent came as a surprise.

“What was so alarming was the degree to which this influences how much time they were spending within areas that protected them,” he said. Or conversely, stripped of protection and outside the areas.

Tiger sharks spend much of their time in U.S. waters where restrictions protect them against commercial fishing using longlines. The lines can be up to 20 miles long, with baited hooks every few feet. The lines are intended to catch swordfish and tuna, but are the leading cause of shark deaths, particularly tiger sharks.

Hammerschlag said those rules need to keep up with climate change. The same, he said, goes for rules protecting other species.

“We need to either be thinking about shifting the location of some of these protected areas or putting in place regulations on the actual fishing activities,” he said.

The shift in species’ ranges could also have far-reaching implications as climate change scrambles the ocean’s puzzle pieces.

For example, tiger sharks feast on sea turtles, Hammerschlag said, and without the sharks, turtle populations could change.

“That’s going to probably have an impact on seagrass,” he said. Seagrass, already being slammed by coastal pollution, acts as a nursery for a host of marine life, helps hold together coastal flats that buffer storms and sequesters the carbon warming the planet.

“So if tiger sharks changed their distribution or their migrations,” he said, “that’s going to have knock-off cascading effects.”