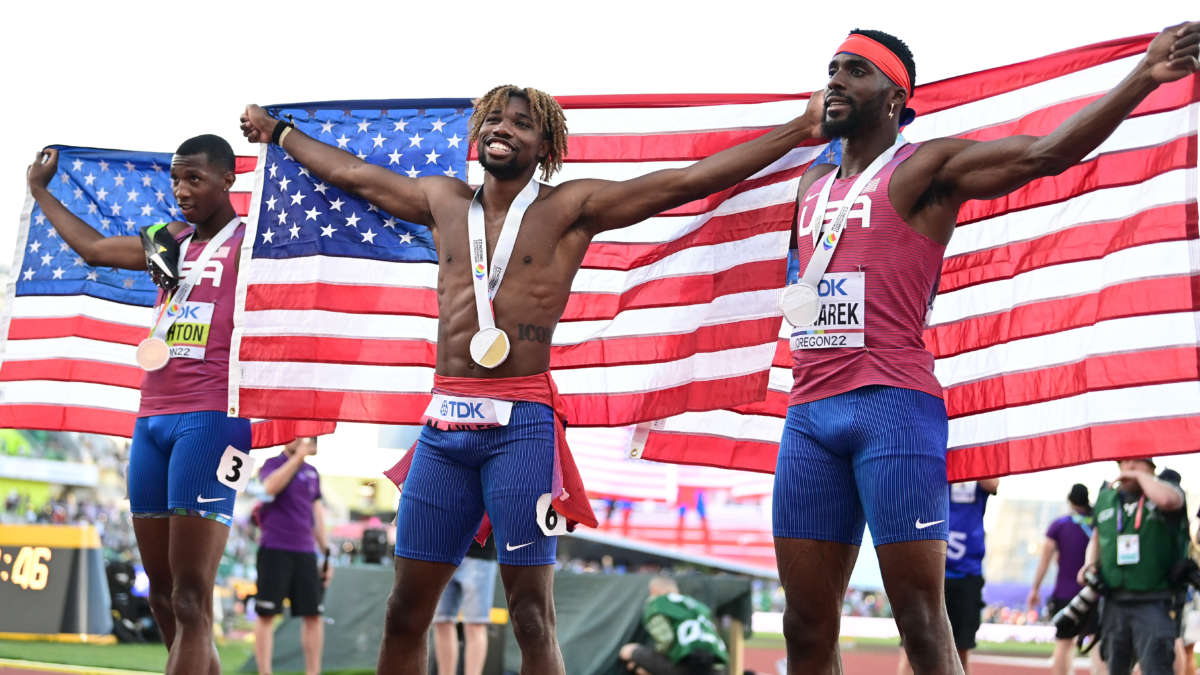 Noah Lyles knew he had run the best race of his life — and maybe the best 200 meters any American had ever run. The Clermont resident finished so far ahead of the other runners in Thursday night’s final at the World Athletics Championships that after crossing the finish line, he turned to stare down his only true opponent: the clock.

But for agonizing moments, the on-field clock stubbornly showed Lyles’ unofficial time as 19.32. The mark would elate any other runner in the world, but it was also the same time Michael Johnson set in the 200 meters at the 1996 Atlanta Olympics. Since then, it has seemed unassailable. Until now.

Lyles, 25, stood with his hands on his hips, staring. He walked over to the clock at Hayward Field in Eugene, Ore., talking to it.

“I was telling it to give me some slack, you know?” he later said, laughing with reporters. “How’s it going to show the same time, 19.32? Come on, change that.”

He crouched toward it, wondering if his hard work would pay off. Lyles targeted the record one summer after winning a disappointing (for him) bronze medal at the Tokyo Olympics. It all came together in Oregon, where Lyles used a fantastic start to take command of a highly anticipated race.

Standing on the track afterward, it seemed like Lyles was having a personal argument with the clock. When he finally turned away, two things happened. The clock’s screen sliced one hundredth of a second off his time: 19.31. Above, it blared the magic word: “Official.”

As screens around the stadium updated with the official time, the celebration of a world title erupted into euphoria over Lyles being crowned the fastest American ever in the 200 meters. His moment came with a large family contingent cheering him on. Lyles later reeled off the roster: “Mom, stepdad, sister, brother, dad, stepmom, uncle, grandma.”

The new record put an exclamation mark on a U.S. sweep in the men’s 200 meters, with 18-year-old Erriyon Knighton claiming bronze and Kenneth Bednarek winning silver.

For Lyles, it was a deliverance long in coming. He has made it a point to speak openly about the challenges he’s overcome to train and race, including asthma. He says therapy has helped him cope with depression, and he works to help young kids pursue track even if they lack the means to do so.

But Lyles outran the world on Thursday night, when he set a new gold standard for U.S. track. He’s now cemented as one of the fastest men the world has ever seen. His 19.31 time has only been bested by two others: Jamaican runners Usain Bolt and Yohan Blake.

Johnson was present to watch his record fall, working as a commentator for BBC Sport. He congratulated Lyles in person.

I’m framing this One!
2 fastest Americans ever! pic.twitter.com/sK8dNTz3ov

“To be honest, I didn’t expect him to come down,” Lyles said with a big smile.

But Johnson did. And so did his record — finally.