Claudette Moves Away, But Unsettled Week Ahead 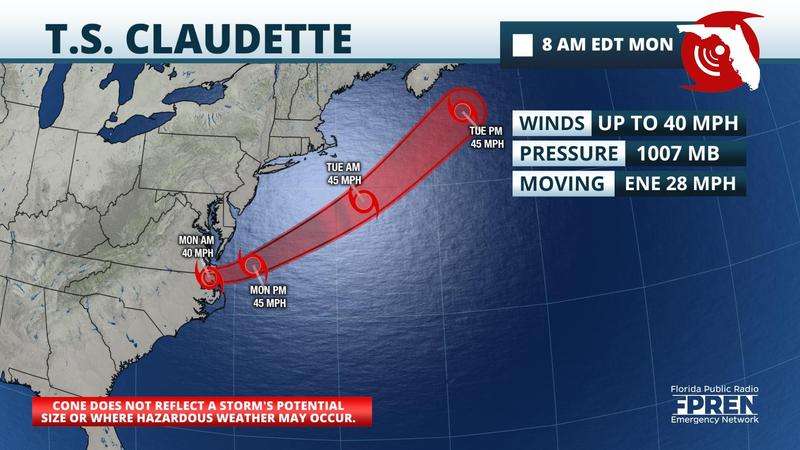 The storm was responsible for flash flooding in the western Florida Panhandle on Saturday after dumping 5 to 10 inches of rain there. Deep, tropical moisture produced bands of heavy rain and strong storms as far east as North Florida Sunday, prompting the National Weather Service to issue Flood and Severe Thunderstorm Warnings late Sunday morning and afternoon.

Even though Claudette is moving away, the tropical moisture it brought to the Sunshine State is expected to stick around for much of the week. A cold front approaching from the Midwest is likely to stall near the George state line, so showers and thunderstorms are possible almost any time, particularly in central and north Florida. A ridge of high pressure over the Florida Straits and the Bahamas may limit the number of storms in South Florida, but they will still be around on Monday. They should become more numerous there Tuesday into midweek as the ridge weakens.

A few of the storms may be strong enough to produce wind damage along the I-10 corridor on Tuesday. NOAA’s Storm Prediction Center posted a “marginal risk” of severe thunderstorms in anticipation of an increase in wind shear over North Florida, which can cause thunderstorms to become more organized.

Prevailing southwesterly winds over the Florida Peninsula may also produce strong storms capable of brief wind damage and flash flooding along the spine of the state and toward the Atlantic side any time this week. High-resolution models, like the one below, provide an estimate of where storms are more likely, and are favoring the eastern side of the Peninsula Tuesday afternoon. The storms in the Gulf may approach the west coast of the Peninsula Tuesday night or Wednesday morning when the air over the water tends to be more unstable than it is over land areas.