China’s ambassador to the U.S. warns of ‘military conflict’ over Taiwan 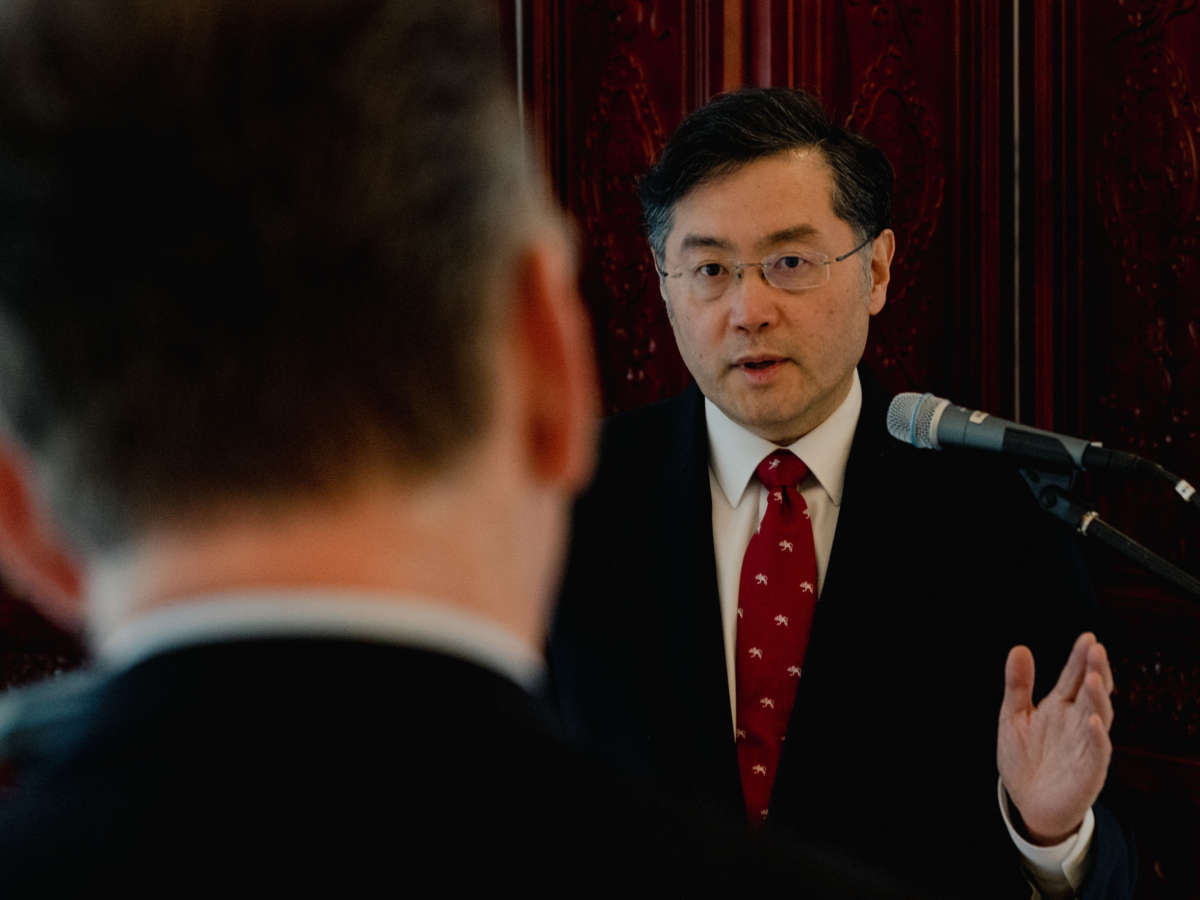 China’s ambassador to the United States issued a warning Thursday: The U.S. could face “military conflict” with China over the future status of Taiwan.

In his first one-on-one interview since assuming his post in Washington, D.C., last July, Qin Gang accused Taiwan of “walking down the road toward independence,” and added, “If the Taiwanese authorities, emboldened by the United States, keep going down the road for independence, it most likely will involve China and the United States, the two big countries, in a military conflict.”

It was an unusually direct statement about the U.S. and Taiwan. Observers say China more commonly speaks in more general terms, such as saying that the U.S. is “playing with fire.”

Though American eyes may be focused thousands of miles away toward a threatened war in Ukraine, U.S. officials and analysts have voiced increasing concern about Taiwan’s ability to defend itself. This week, 39 Chinese military aircraft flew near Taiwan, the latest of several such demonstrations. It’s widely believed that the U.S. would defend Taiwan in the event of war, though no formal treaty requires it to do so.

Ambassador Qin spoke of Taiwan at his official residence Thursday, where he welcomed NPR’s team to discuss U.S. relations with China and the upcoming Winter Olympics in Beijing. He is a veteran diplomat who previously served as the chief of foreign affairs protocol for China’s President Xi Jinping.

Qin arrived in Washington last year at a time of bipartisan disappointment with China. It’s widely conceded in Washington that a decades-long policy of engagement with China produced great wealth for many companies, but failed to spark democratic reform. Qin told us that any ideas of “changing China” were always “an illusion.”

He spoke of the upcoming Olympics with pride: “Beijing is ready.” These are the second Olympic Games hosted by Beijing, with athletes and others largely living inside a secure “bubble” to protect against coronavirus infection.

A “diplomatic boycott” of the Games by U.S. officials has added tension, though U.S. athletes will compete and only a few U.S. allies have followed suit. The U.S. announced the boycott in protest of what it terms the “ongoing genocide” of Uyghurs, a mostly Muslim minority in western China. Qin rejected such accusations as “fabrications, lies and disinformation.”

He nonetheless asserted that some Uyghurs were terrorists.

“The destination for them is prisons,” he said, while asserting that others had inappropriate thoughts that they were being taught to change in “vocational schools.”

NPR correspondents have documented widespread imprisonment of Uyghurs, as well as efforts to turn them away from their language and culture. NPR has also reported a security architecture in the western province of Xinjiang that is even more intense than in other regions of China, with cameras and police stations that are nearly ubiquitous.

The U.S. has become more vocal in defense of Uyghurs as overall relations have soured. If either side hoped for a reset in relations after the departure of former President Donald Trump, it hasn’t quite happened. President Biden has yet to remove Trump’s tariffs on Chinese goods, and U.S. diplomats have traded contentious statements with their Chinese counterparts.

Of the many irritants in the relationship, the ambassador described Taiwan as “the biggest tinderbox.” It has governed itself separately for generations. Unlike the rest of China, Taiwan was not conquered by Communist forces in the civil war that led to the declaration of the People’s Republic of China in 1949. The former government took refuge there and, with U.S. support, eventually developed a democratic system.

Beijing has long sought unification with Taiwan, and has not renounced the use of force to meet that goal. The U.S. has said it expects the matter to be settled peacefully.

“People on both sides of the Taiwan Straits are Chinese,” Qin said, arguing that his government has no desire for war. However, in a sharp rebuff of any effort by Taiwan’s government to formally declare independence, he said, “China will not commit to giving up the un-peaceful means for reunification because this is a deterrent.”

Even so, Qin said China’s “most important relationship” is with the United States, and gave a straightforward description of his mission in Washington: “Don’t mess it up.”

On whether Americans should be concerned about a Chines attack on Taiwan:

On the prospect of military conflict:

“People on both sides of Taiwan Straits are Chinese, so we are compatriots. So the last thing we should do is to fight with compatriots. And we will do our utmost in the greatest sincerity to achieve a peaceful reunification…. But… that Taiwanese authority is working down the road towards independence, emboldened by the United States. So China will not commit to giving up the un-peaceful means for reunification because this is a deterrence.”

On policies and human rights abuses against mostly Muslim Uyghur populations in western China that prompted the U.S. diplomatic boycott of the Olympics in Beijing:

“The actual condition is that Uyghur people as other ethnic groups of people, they enjoy happy life. They enjoy the rights and the freedom guaranteed by the constitution of China. They are a member of the big family of Chinese nation. This co-called genocide or forced labor–these are big lies of the century. There’s no genocide at all.”

On whether Chinese President Xi Jinping believes America’s global status is in decline: