Children Now Account For 22% Of New U.S. COVID Cases. Why Is That? 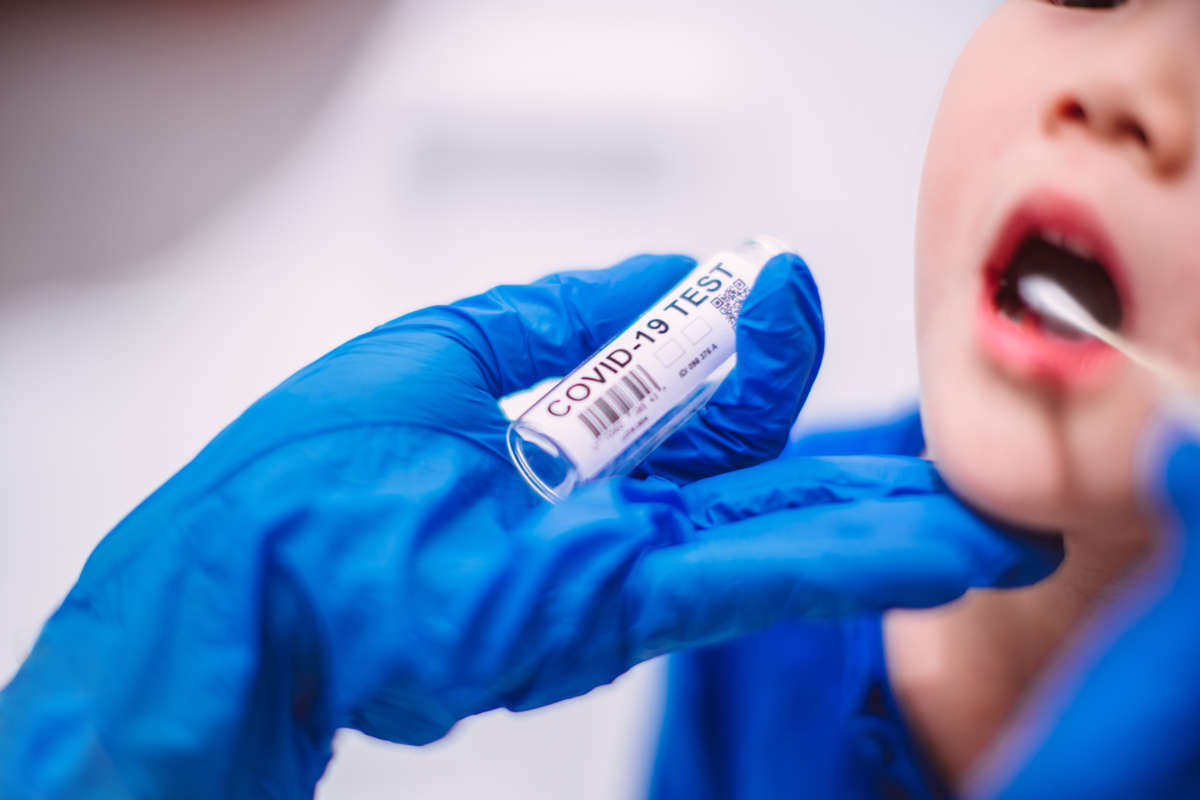 Children account for more than a fifth of new U.S. coronavirus cases in states that release statistics by age, according to the American Academy of Pediatrics.
Image credit: Tang Ming Tung

The number of children contracting COVID-19 in the U.S. is much lower than the record highs set at the start of the new year, but children now account for more than a fifth of new coronavirus cases in states that release data by age, according to the American Academy of Pediatrics. It’s a statistic that may surprise many: Just one year ago, child COVID-19 cases made up only around 3% of the U.S. total.

On Monday, the AAP said children represented 22.4% of new cases reported in the past week, accounting for 71,649 out of 319,601 cases. The latest report, drawn from data collected through April 29, illustrates how children’s share of coronavirus infections has grown in recent weeks.

Experts link the trend to several factors – particularly high vaccination rates among older Americans. The U.S. recently announced 100 million people were fully vaccinated against COVID-19. But other dynamics are also in play, from new COVID-19 variants to the loosening of restrictions on school activities.

It’s also worth noting that for the vast majority of the pandemic, the age group with the highest case rates has been 18 to 24 in the U.S., as the Centers for Disease Control and Prevention notes.

To get a sense of what’s behind the rising proportion of cases in children, we spoke to Dr. Sean O’Leary, vice chair of the AAP’s Committee on Infectious Diseases. O’Leary is also a professor of pediatrics at the University of Colorado Medical Campus and Children’s Hospital Colorado.

Does it surprise you, the kind of numbers we’re seeing for children right now?

Certainly, vaccination is playing a role in terms of the changing in the demographics of who’s getting infected.

In many parts of the country, depending on how states track their data — 60 and older, 65 and older, 70 and older — very high proportions of those populations in some places have been vaccinated.

In terms of raw numbers, the worst stretch of coronavirus infections for children was in a 13-week stretch from early November to February. The numbers fell as the U.S. exited its end-of-year wave. But since around mid-March, child coronavirus cases have not fallen at the same rate as adult cases.

We are seeing more outbreaks than we had related to school and school activities. We’ve seen those all along, and we’re seeing a little bit more of those now proportionately than we had. And I think that’s also due to a combination of factors. Again, the variants, but also more kids in the last couple of months are in in-person school than they had been in prior months.

The other thing that we’ve seen is more outbreaks in school-related activities, particularly sports and indoor sports in particular.

What do you make of the most recent data, showing kids accounted for about 20% of new cases in the past week?

As older portions of the population get vaccinated and we’re still seeing circulation, it just stands to reason that the kids who are not eligible for vaccination yet are going to make up a larger share of that pie. I mean, the hope is that the overall pie itself gets smaller — the number of infections overall. But yeah, if it’s circulating, it’s going to hit the people that are most vulnerable, which are the people that haven’t been vaccinated.

Now, the good news is we may, in the coming weeks, have the vaccine approved down to age 12. We don’t have any official dates on that yet, but it may be soon. Pfizer submitted their data to the FDA last month. So that could be a big game changer because we’ve known all along that adolescents tend to be both more likely to get infected and to spread the infection relative to the younger kids. So getting that population vaccinated is also going to make a difference in these dynamics. And I think it also can make a big difference for a lot of families’ summer plans.

We should note that kids still represent a really small proportion of the worst-case outcomes.

Yeah, that is true. It’s a somewhat nuanced conversation though. In Michigan, they’ve been reporting higher rates of hospitalizations in kids than they had [been]. It’s unclear to me if that simply represents intense transmission versus actually increased severity. I think that’s not entirely clear yet. Here in Colorado, we have a little surge going on. In most states actually, cases are going down. We’re still kind of in a plateau, maybe increasing a bit here in Colorado. We have seen a slight uptick of kids hospitalized with COVID-19 here at Children’s Hospital, but it’s not dramatically so, not like what we were seeing in November, December or January.

Now, the part where that conversation about severity gets a little bit more complicated is yes, it is absolutely true that it’s less severe in kids than it is in adults, and particularly older adults. But it’s also not true to say that it’s completely benign in kids. Fortunately, pediatric death is a fairly rare event. But when you look at the top 10 causes of death, on an annual basis, this year, we’ve had, depending on whose numbers you use, somewhere between 300 and 600 pediatric deaths from COVID-19 so far. That’s probably an undercount. And that would fit it somewhere in the top 10, somewhere between like No. 6 and No. 9 in terms of causes of death for children.

So the point I’m making, there is that yes, it’s less severe, but it’s still potentially a very severe disease. We’ve seen tens of thousands of hospitalizations already. So we do need a vaccine for children, not just to protect, not just to achieve herd immunity, but also to protect the children themselves.

What about “long COVID” – are kids showing extended months of symptoms from the disease?

In kids, we have seen it, but it doesn’t seem to be as common as adults. We’re taking care of a few kids now who are still having symptoms well over a month past their infections. I think, as little as we know about long COVID in adults, we know even less in kids. We really have even less of an understanding of the overall epidemiology of how common it is in kids.

The other question mark in my mind around this phenomenon is, many viruses can trigger sort of longer-term symptoms. A classic example would be mononucleosis: Some kids will have fatigue and symptoms for six to 12 months, occasionally even longer. So what’s unclear to me at this point is if long-term symptoms are more frequent with COVID-19 than with some of the other viruses we’ve seen. But I wouldn’t say that we’re seeing sort of an epidemic of long COVID kids the way we have in adults.

How difficult is it to get data on children and COVID-19? I know that for its weekly reports, the American Academy of Pediatrics and the Children’s Hospital Association compile data from 49 states, along with New York City, Puerto Rico, the District of Columbia and Guam. That leaves out the rest of New York state. And Texas only reports on the lower age range for a small percentage of the state’s cases.

That’s correct. There have been problems with data around this pandemic all along, including this particular situation. I think as long as you’re comparing apples to apples, recognizing the limitations, I think that you can interpret the data. But, yeah, it’s clearly an undercount.

Standardized data about COVID-19 cases across states has been pretty hard to get. From early on, it seemed like the Centers for Disease Control and Prevention and other federal agencies did not comprehensively standardize the different data that was out there.

Yeah, I mean, that’s been a frustration throughout the pandemic. It was kind of shocking to me, frankly, even though I kind of worked in this field for a long time, that the AAP was really the best source of pediatric data through much of the pandemic for the U.S. And the AAP is a big organization, but we have a fairly small research shop, and it was the AAP that was compiling this data.

I absolutely adore my colleagues from the CDC. And they have really done herculean work through this pandemic. But they had so many things they had to deal with related to the pandemic — crisis after crisis with adults – that they just didn’t have the capacity at the time to be able to track the kids who were, as we know, less severely affected.

What else should people understand about children and the COVID-19 pandemic?

We’ve been answering these questions about children and infections for almost a year, I guess. And what we’ve seen all along is that what is happening in children is simply reflective of what’s going on in the surrounding community. It’s not really driving what’s going around in the surrounding community. And I think that’s still the case, actually.

Traditionally, people think of children sharing viruses among each other and then giving them to adults. And this seems like that dynamic is almost the inverse.

It’s a strange virus, isn’t it?