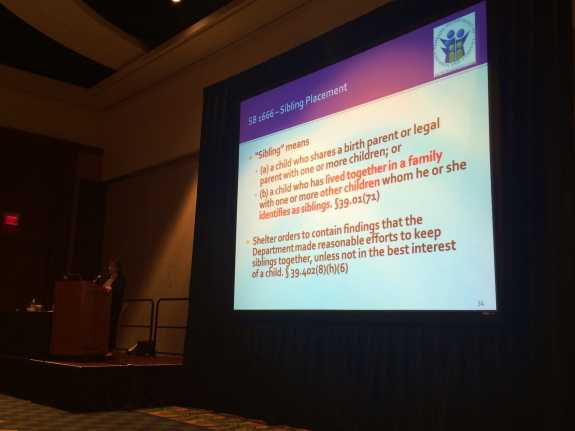 DCF workers host a session on the Child Welfare Act at the Child Protection Summit in Orlando, photo by Amy Kiley

The Child Protection Summit wraps up in Orlando Friday.  90.7 News stopped by to ask workers who serve vulnerable populations how they’re implementing the new Child Welfare Act — and to meet the person in a new job that law created.

The state Department of Children and Families hosts the summit every year – but this week’s meeting has record attendance.

From lawyers to child protective investigators, attendees are trying to understand and implement the new Child Welfare Act. It took effect July 1 to try to stop children from dying while under state care.

Stephanie McDonald works with DCF as a family consultant for Boys Town.  “It’s been a negative because people aren’t going to look at social workers as providing quality service and those things, and that can be, you know, not a good feeling,” she says.  “At the same time, I think it’s a positive because it helps to sharpen our skills as social service workers to make sure we’re better critical thinkers, so that nothing like that has to take place again.”

Organizers say about 2,600 workers like McDonald pre-registered for the summit – and more signed up at the door.

The Legislature created the position of DCF Assistant Secretary of Child Welfare as part of the Child Welfare Act. The day after the law took effect, Janice Thomas stepped into the new role.

During the summit, Thomas said the last two months have been busy. The Child Welfare Act is one of a half-dozen new laws significantly revamping DCF’s work in Florida.

Some advocates say a fresh approach to leadership is what DCF needs. Thomas says she started serving vulnerable populations over 30 years ago as a social work intern.