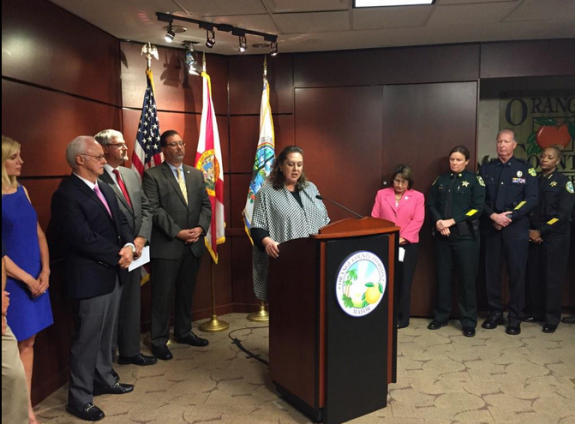 There have been eight deaths in Orange County so far this year, suspected to be the result of child abuse. That number and others have prompted officials and advocates to step up efforts to raise awareness and help prevent child abuse.

CRYSTAL: Catherine another number being rolled out is that Orange County has the second highest rate in the state for reports of child abuse to the state’s hotline. Why Orange County?

CATHERINE: First there’s its size, it has one of the larger population in the state, so there’s that. But advocates say there are a lot of young families with low-paying jobs. And that there’s a link between the stresses that come with making ends meet … and child abuse. I should note that the state’s other two large metro areas: Miami-Dade and Tampa-Hillsborough rank first and third respectively when it comes to child abuse reports.

CRYSTAL: And now the Domestic Violence Committee has announced it will bring child abuse under its umbrella, what’s the link there?

CATHERINE: The link, Crystal, is that where there’s domestic violence there is often child abuse. Advocates say it’s part of the control the abuser has over the spouse and family. And the Domestic Violence Committee recognized that link, and was prompted by these numbers … there were almost 14-thousand child abuse reports to the state’s hotline out of Orange County last year, and the eight deaths you mentioned earlier … those numbers were alarming enough to prompt the committee into taking on child abuse as well.

CRYSTAL: And so what does that mean?

MARTINEZ: So what it means is you have the leaders of all these key agencies, the law enforcement agencies, the state attorney’s office, the judges and everyone who are involved in the system can give their perspective and really focus on solutions and how we can move the needle locally.

CAT: And not only will there be more resources to help child abuse victims and their families, but also more minds focused on prevention.

CRYSTAL: So is the goal to have that number of nearly 14,000 calls to the state’s hotline down by next year.

CATHERINE: Actually, the expectation is that there will be more calls than last year … it sounds counter intuitive but the number may need to go up before it can go down … that increase in calls to the child abuse hotline could mean there’s a greater awareness. Advocates I spoke with couldn’t say how long it would take to make an impact that is profound and lasting. But they did say there needs to be a change in how our culture addresses child abuse. That it can no longer seem okay to turn a blind eye to signs of child abuse.