Checker Park, A Constant Amid An Evolving Parramore Neighborhood 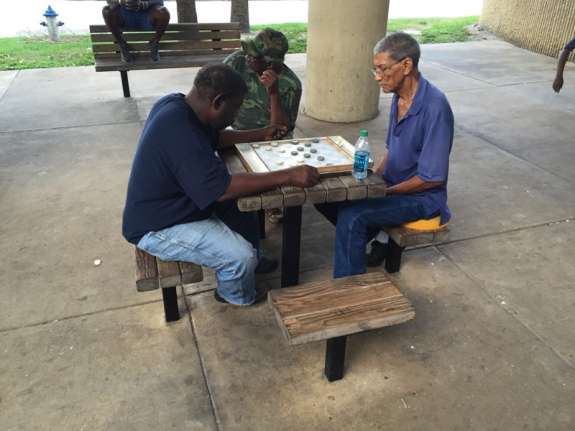 Underneath an overpass on South Parramore Avenue the same people play checkers, week in and week out. A breeze passes through, an escape from the Florida heat. Most of the men have been playing here for decades. Today we look at Checker Park, where a poverty-stricken community hangs out to get lost in a good game of checkers.

*Scroll down to watch a video of Orlando poet Simba Castano performing her spoken word piece on Parramore at Checker Park and other neighborhood locations.

A wooden sign sits in the grass welcoming people to the underpass, it reads Checker Park in big green letters. A red bike leans up against it. Carlos Martinez sits on a small wooden bench across from a fellow checkers player.

Through his glasses, Martinez’s eyes stay focused on the gray and white board. He’s played here for 12 to 14 years, yet he still considers himself a newcomer. Others have played here longer, including a guy they call “Fishman,” and they’ve earned respect. Outsiders are welcomed to the game.

The players are competitive, seeing three, four steps ahead of you. A few claim to be the best. There’s so much pride around the tables. Benches surround the checker tables, people sit quietly, some with blank stares. Trash and plastic bags are littered about. A grocery cart is parked with dirty blankets piled high. Some of the people who frequent Checker Park have no home to go to.

Joe Mckenzie is here today just to relax. He says he’s been to prison a couple of times. He’s not sure how many kids he has, maybe nine, hasn’t seen them in a long time, says he had to move on.

“I think life is beautiful, waking up and seeing another day. God give you another chance, when you wake up and see another day you lucky. I’ve seen a lot of…leave before their time you know what I mean,” said Mckenzie.

Mckenzie’s optimistic Checker Park is here to stay. He also thinks the soccer stadium is going to be an economic boon for Orlando.

“It will help the people, soccer is very important make a lot of money, soccer, it’s gonna bring money and the tourists have something for them to look at,” said Mckenzie.

Off the mic more people talk about the development happening in and around Parramore. It is what it is. The soccer stadium is good for the city, not for me, more than one says. Park goers don’t talk to media because they don’t think it will make a difference. They don’t think those listening to this story care about their opinions. They really don’t think their voice matters.

One man says the park won’t last, it’ll be gone before the new stadium arrives. The commissioners have already made up their minds he says with conviction.

Mayor Buddy Dyer says the stadium will have no effect on the park. He says it’s historic; the park’s been around since the 50s.

“That area under the East West Expressway Authority was once Z.L. Riley Park and when the expressway authority did their latest renovation one of the things that we partnered with them to do was to create a new Z.L. Riley Park,” said Dyer.

If Checker Park weren’t here, the men say they’d stay home, the ones that have homes. One man says if this community gathering spot wasn’t here more people would be up to no good. There’s such a sense of lost hope in the air.

That’s until some people come by with food. A truck stops and some ladies drop off fresh strawberries and bananas. People’s faces light up. Everyone shares their food.

Cars whiz by on the expressway right over Checker Park with many people unaware of this community underneath. But as long as these checker tables are here, you can bet you’ll see these same faces, playing a competitive game of checkers week in, week out.

Eric Breitenbach, professor at the Southeast Center for photographic studies at Daytona State College, and Orlando Poet Simba Castano teamed up for a video of Simba performing her spoken word poem about the changes happening in the Parramore neighborhood as development moves in.