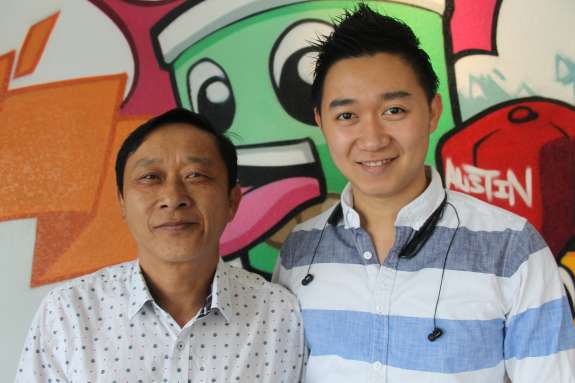 Celisa Perez is at a small shop in the heart of a Vietnamese community, not far from Little Vietnam, getting small needles pushed into her face.Perez has had migraines for 30 years. She’s tried three different medicines to prevent them, but none of them worked.

She tried a chiropractor and herbal supplements, but still the debilitating migraines came two to three times a week.

So now Perez is trying acupuncture.

“Deep breath in, and out,” says Van Nguyen, an acupuncturist.

Nguyen puts the small, sterile needles in Perez’s brow, behind her ears, on her arms, and down her ankle. Perez keeps her eyes closed, wincing as the needles as the needles go in.

Perez said the last two months of treatments have helped.

“I’m down to one migraine every 10 days,” Perez said. “And the intensity is not that intense. I’m not going to emergency rooms any more. If I take just half of the pill, I’m OK.”

Her neurologist recommended acupuncture, but she was skeptical.

“They all recommend it. I just never thought it would work taking my pain away,” Perez said. “And I never thought about it. I’m totally amazed, actually.”

Perez was skeptical because her husband works for a pharmaceuitical company. As an acupuncturist, Nguyen understands the tension between eastern and western medicine better than most. She initially wanted to be a surgeon.

She studied eastern medicine and philosophy in Vietnam at a Buddhist temple, and almost became a nun. But her mentor steered her back toward healing.

Nguyen sees western medicine as only treating half of the problem.

Western medicine often suppresses pain. But pain shows your body where the problem is.

The needles stimulate your body’s natural reactions and healing.

“It’s not only the nerve,” Nguyen said. “It’s the channel that enclose the nerve’s pathway, the blood vessel and the lymphatic system. It’s more than the nerve.”

Accupuncture is probably the most recognized, it’s certainly not the only form of eastern medicine practiced in the Vietnamese community.

Another way to treat a cold or flu is an eastern remedy called cao gio, or coining.

You start by taking a coin or, really, anything hard. You use an oil or balm, and scrape along the back, starting near the spine and going out. You do this in one direction over and over again until a bruise forms.

If you visit the Vietnamese grocery and health stores in the Little Vietnam area, you’ll often times find supplies for cao gio.

On shelves next to boxes of herbal teas and menthol oils, there’s an end cap with the tools for coining.

If you’re buying some of those supplies, you might run into the Bui family.

But his son Mau worries traditional medicine is fading away with the new generation of Vietnamese in Central Florida.

“Especially in Orlando, in U.S. right now, not a lot of Vietnamese people believe in traditional medicine,” Mau said. “Some do, and some don’t. I want to learn both.”

Mau wanted to learn traditional medicine, but his family wanted him to learn western medicine

“Yes, they’re saying traditional medicine over here, they don’t make a lot of money,” Mau says with a laugh.

Mau has a big plan: Go to medical school, become a western doctor, and then learn about traditional medicine.

So let’s compare and contrast eastern and western medicine. If you have a fever, the typical treatment would be an over-the-counter drug like Tylenol or Advil.

In traditional medicine, fighting a fever involves cutting a red onion into seven pieces if you’re a man, nine if you’re a woman. You put the onion on a small plate and cover it with vegetable oil. Then you light the oil with a small cloth, and cover yourself with a blanket and inhale. You have to keep water in your mouth to protect your teeth.

Afterwards, you eat a hot rice soup with an egg in it to break the fever.

So what does Mau do when he gets sick? Advil, or onion?

He starts with Western medicine, and if that doesn’t work, he moves on to more traditional remedies.

“If it gets worse and stay for a while, I don’t think it gets better, at that point, I go for traditional medicine.”

On the day I met Mau and his father, I happened to have a lingering cough. Mau’s father demonstrates an acupressure massage to help.

Rather than using a needle to activate a pressure point, Quat uses his strong hands. I take a deep breath, and he applies pressure along the little dip in your collar bone. The movements are quick, purposeful, strong.

The massage definitely released endorphins, and helped me relax. It didn’t fix my cough; that took a trip to the doctor.

But maybe that’s the point: A blend of both traditional and western medicine. That could help keep the practice from fading away.