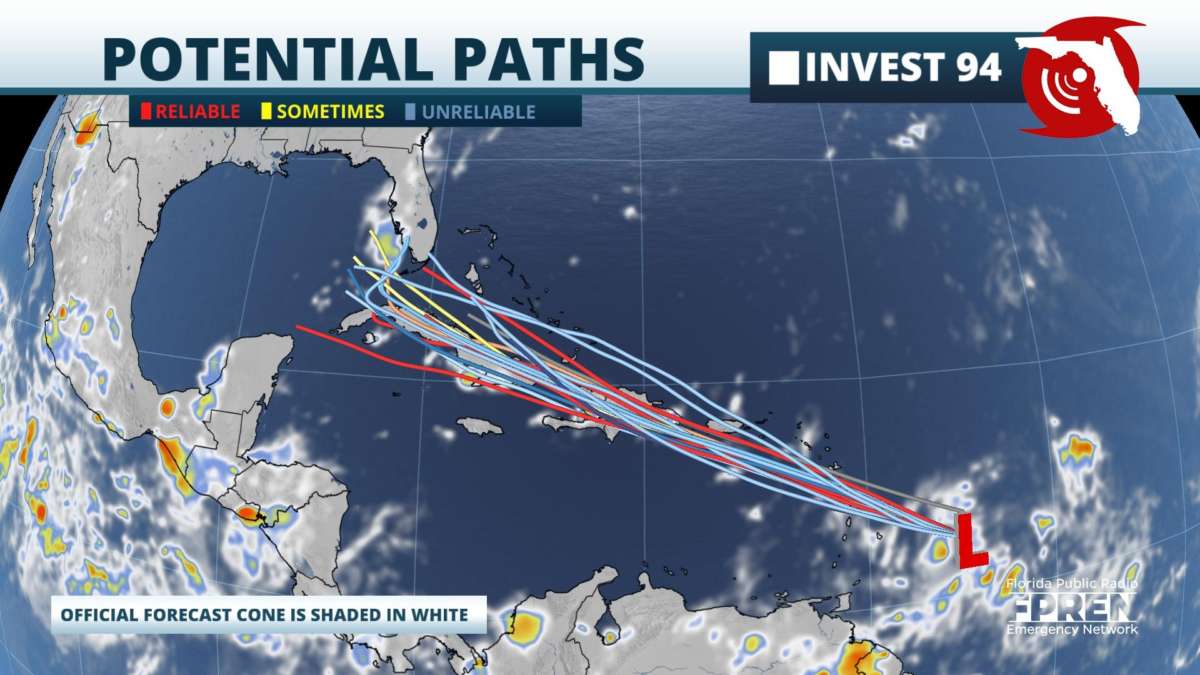 At least two tropical waves are showing signs of developing into a depression or storm in the next five days. One of them is on track to reach Puerto Rico by Tuesday, then possibly the Florida Straits or Bahamas by week’s end.

The first disturbance (identified as Invest 94L by meteorologists) was located 400 miles east-southeast of the Leeward Islands Sunday evening, producing disorganized showers and thunderstorms. In their 8 pm tropical outlook, the National Hurricane Center (NHC) said conditions were expected to be “conducive” for development and that Invest 94L had a “medium chance” of becoming a tropical depression over the next few days.

Invest 94L is forecast to reach portions of the Lesser Antilles late Monday, where NHC forecasters say tropical storm warnings may be required with a “shorter-than-normal” lead time. The disturbance is then likely to pass near or over the Virgin Islands and Puerto Rico Tuesday, then near Hispaniola by the middle of the week. Gusty winds, heavy rain and flooding are possible in these areas from Invest 94L, although the location and magnitude of these potential impacts won’t become clearer until the system matures into a cyclone.

A second tropical wave was also identified by the NHC for development Sunday evening in the central Atlantic Ocean. This one is referred to as Invest 93L and was located midway between the Cabo Verde Island and the Lesser Antilles. Conditions appeared only “marginally” favorable for development, but at the time still had a “medium” chance of becoming a tropical depression in the next five days. Probabilities for Invest 93L had increased some since Saturday, but the system changed little in organization Sunday.

No other tropical waves were officially identified by the NHC Sunday evening, but some long range forecast data suggests another tropical wave behind Invest 93L might have an opportunity to develop in a few days. Global and regional environmental conditions are becoming more favorable for tropical development in the Atlantic, and this trend is likely to continue as the climatological peak of the Atlantic Hurricane Season nears in the coming weeks.