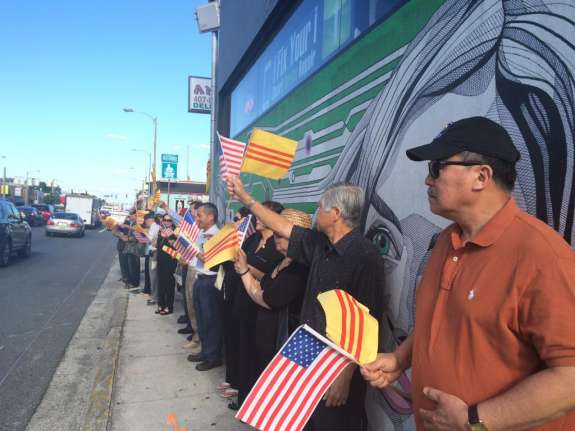 Members of the Vietnamese community mark the Fall of Saigon every year in downtown Orlando. Photo: Ricky Ly.

Central Floridians who risked their lives to escape Vietnam forty two years ago will gather in Orlando this weekend to commemorate Black April, a pivotal moment in Vietnam War history when thousands of Vietnamese fled for the United States, many in makeshift boats.

“They’re out of gas, they’re out of food. Some being raped and some people being robbed,” said Hung Nguyen, who is organizing the commemorative ceremony. “Those are the journeys that they have experienced and at the front, you don’t see the horrible side of the people who did that.”

Their sacrifices play a strong part in Vietnamese American identity and memory. A peaceful protest is also planned to address issues Vietnamese compatriots and relatives are currently facing under the country’s community regime.