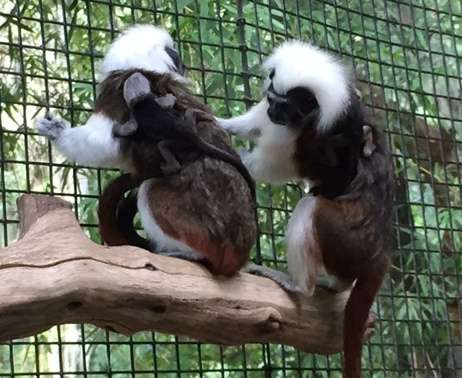 The Central Florida Zoo and Botanical Gardens is welcoming the birth of three cotton-top tamarins. These critically endangered small monkeys are typically born as twins.

The Central Florida Zoo now has a total of nine cotton-top tamarins named for their distinctive bright white hair. They’re native to Columbia and have long tails that help them balance as they move along trees.

“I can’t even describe the sounds that they can make; it’s absolutely incredible. If they see a snake tail go into the bushes, they have alarm calls… they have social sounds that they make when they’re grooming each other,” said Lamar.

Cotton-top tamarins live in large family groups and the father and siblings help carry the babies so mama can rest and eat.

The tamarins are part of the zoo’s managed breeding program, which is part of a larger network to save species affected by issues such as deforestation.