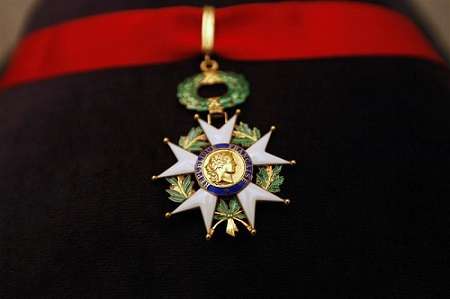 The Knight in the National Order of the Legion of Honor, established in 1802 by Napoleon Bonaparte, has been awarded to more than 1,500 veterans in Florida. Photo: French Consulate.

Seven central Florida veterans will receive France’s highest military award for their service in World War II: The Knight in the National Order of the Legion of Honor, or Chevalier dans l’Order National de la Legion d’Honneur. The distinctive white, green, and red medal was established in 1802 by Napoleon Bonaparte. Today, French officials bestow the medal upon French nationals and foreigners who have helped protected the country. It has been awarded to thousands of people, including Thomas Edison and former Secretary of State Colin Powell. So far the French Counsul General based in Miami has given 1,500 of the medals to veterans, the largest number of any French consulate in the United States.

Two of the central Florida veterans receiving the honor Wednesday are deceased.

The names of the veterans are: