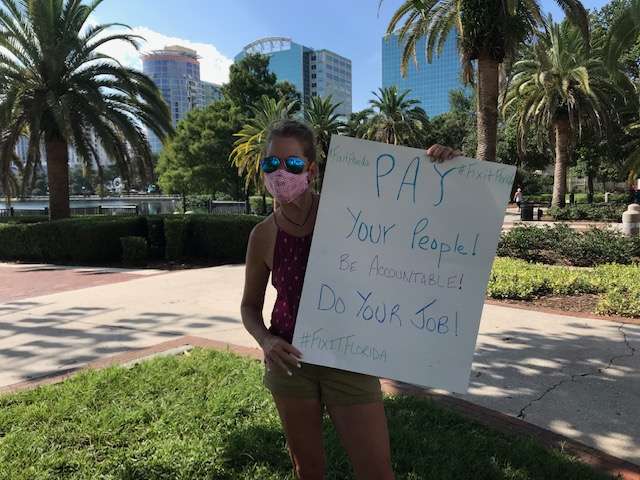 Furloughed and laid off Central Florida workers called on local businesses and the state to protect their jobs and provide unemployment assistance Wednesday.

Koko Monroe said the company she works for got a three month rent waiver for more than 2 million dollars, but she still hasn’t been called back.

“Their bottom line is protected but not our jobs. We gathered here to say enough is enough.”

In a comment, HMSHost said, “We remain committed to bringing back as many associates as possible when travel resumes to normal levels, but there is not enough work to justify recalling many or all of our associates at this time.”

Across town at Lake Eola in downtown Orlando, people who lost their jobs as a result of the pandemic held signs and called on Gov. Ron Desantis to process benefits.

Jennifer Kane who works as a behavioral therapist with children on the autism spectrum said she lost her last client in March and needs the money now.

“I understand that you adopted a faulty system no one can blame you for that but yet at the end of the day it is your job to get it fixed and it should have been fixed immediately.”

Kane says altogether, if she’s calculated it correctly, she’s owed more than 8,000 dollars. She says she’s relying on savings to feed herself, her daughter and her granddaughter.

All other major bills? They’ll just have to wait.

Since March 15, more than 2 million people have applied for unemployment through the state’s Department of Economic Opportunity.