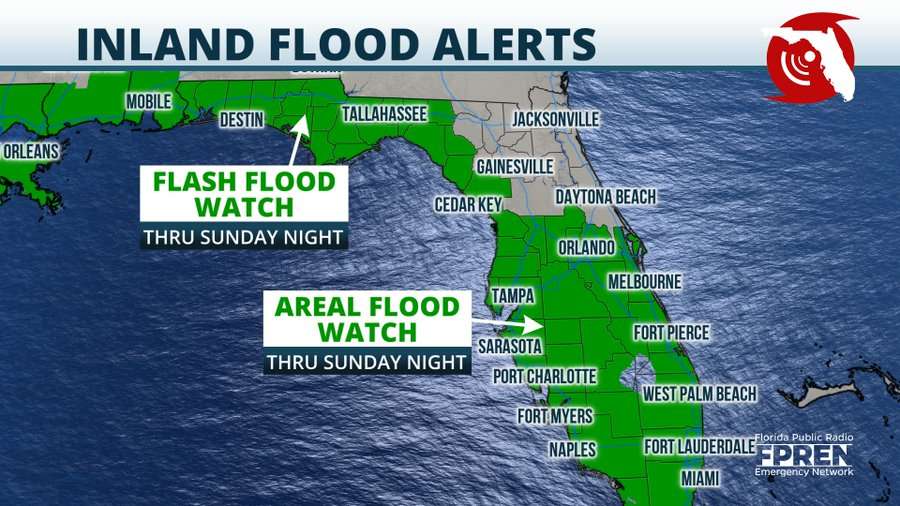 Central Florida is under a flood watch from Topical Storm Cristobal.

Central Florida is under a flood watch as Tropical Storm Cristobal churns in the Gulf of Mexico, where it is expected to strengthen and make landfall in Louisiana Sunday.

The hazards from Cristobal, which primarily include heavy rain and a potential storm surge, could extend more than 400 miles to the east of where the storm’s center comes ashore.

Storm Surge Specialist Jaime Rhome says the discontinuous nature of the surge watch is a function of the details of the coastline, along with the very large wind field anticipated with Cristobal. The details Jaime speaks of include the concave nature of the Big Bend, the shallow shelf waters over the northeastern Gulf of Mexico, and the persistent southerly winds that are expected through Sunday.

“This will drive water north into Apalachee Bay and the Big Bend, which will likely cause coastal flooding at high tide on Sunday,” said National Weather Service Meteorologist Tom Johnston.

In addition to the #FloodWatch over #CenFla & #SoFla, a #FlashFloodWatch is in effect for the Florida #Panhandle through Sunday night. Bands of torrential rain are expected to continue impacting our state through the weekend, and flooding will be a hazard. #FLwx pic.twitter.com/s90yEQPv5W

Numerous showers and thunderstorms are expected across the state this weekend, and by Monday, most of Florida could have received more than three inches of rainfall. The highest accumulations will likely occur along the Nature and Forgotten Coasts. Along these shores, up to 5 inches of rain, with locally higher amounts will be possible. Two to four inches of rain are likely toward interior and western parts of the peninsula. Toward the Atlantic coast, one to three inches of rain will be more likely.

Showers and thunderstorms will be possible all weekend, but the heaviest rain should fall overnight Saturday through Sunday afternoon, before taping off Sunday evening. Tropical moisture will remain in place across Florida through the first half of next week, but the widespread, steady rains will subside as the tropical storm weakens over land and moves north into the Midwest.