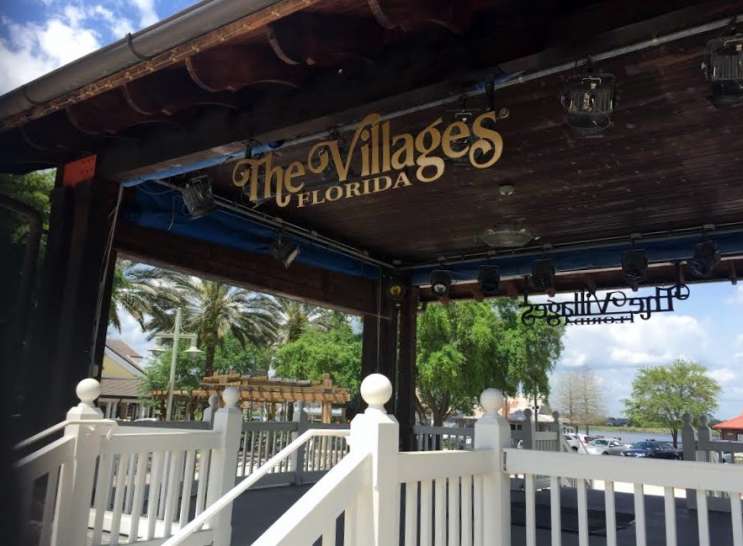 The Villages is the nation's fastest growing metropolitan area for the third consecutive year, according to U.S. census data. Photo: Renata Sago

It’s a weekday morning and a plaza in The Villages is bustling. Gray-haired men on bicycles fly past mature women in tennis skirts. Music from the band Earth, Wind & Fire blasts out of speakers atop poles placed neatly in front of a row of parked golf carts. Birds chirp in tandem.

Paul Maurer and his wife Betty sit on a bench overlooking a large lake with a harbor. He marvels at the distance from one plaza to another—all on The Villages property.

“You know how big this place is? Sixteen miles from here to Brownwood,” he says. “We go on a golf cart. It takes a little while, but it’s fun and everything is gorgeous all the way.”

“We got a tape of The Villages and we watched it and we said, ‘Let’s go down.’ We came down,” he says. “We rented a golf cart and they gave us a villa just to show us The Villages.”

After a five-day visit, they decided to come back once a month every year, and as soon as Maurer retired from managing chemical maintenance, he and Betty moved down. They purchased a for-sale-by-owner home and two golf carts.

Now, at 80 and 90 years old, their days consist of cocktails and country music shows.

“If you come here on the weekends and stuff when people are coming in from up north, you’ll see them in all the sale centers. They’re packed and they’re all looking at homes and stuff.”

Susan Kelly lives in Lake County where the Villages began. She’s happy on her five acres of land outside the retirement community, but she gets why so many retirees like it.

“We’re not a ’65 and I’m in my rocking chair’ anymore,” she laughs. “People realize they can be active until their 80s and their 90s and they want to be. And this is a community that allows them to do that.”

Kelly runs the Lady Lake Chamber of Commerce and has seen a lot of changes since she moved there in the 1980s.

“When we arrived, there was no stoplight,” she remembers.

The Villages was a cluster of mobile homes, like other retirement communities nearby.

By the mid 1990s, changes started taking place. Community founder Harold Schwartz and his son Gary Morse started buying up land and building houses on it. Then came stores. And schools. And a hospital. What set The Villages a part from other retirement communities has been amenities…and lots of them.

“We have every major restaurant chain possible. We’re constantly adding retail stores,” she says. “Stein Mart just came in. They’re begging for J.C. Penney and Dillard’s. Who knows? Everything you could possibly want is here and so people from outside come in now.”

Part of the attraction to The Villages is its strong community support system.

“You’re going in for an operation, let me tell you, the neighborhood comes and gives you a schedule – who’s going to visit you in the hospital, who’s going to bring food to your house, says Kelly. “You can be alone and elderly because they surround each other and take care of each other, so that sense draws them all in.”

“Quite unique, certainly within the Florida context. This is almost a city in and of itself.”

Doty says Sumter County has grown dramatically—and it’s due almost entirely to The Villages. The median age there now is in the mid-60s, and he projects by 2020 that it will go up.

“It’s really been a sort of a trendsetter. Developers are watching this model very closely moving forward,” he says.

Over in the packed shopping plaza in The Villages, Paul Maurer and his wife Betty are looking forward to seeing The Villages grow. For them, that means more new faces to smile at.

But there’s just one thing they’re not looking forward to, the two say: traffic in the golf cart lanes.

“When they’re driving their carts around and stuff, you think, what they heck are they doing? They’re too old to be driving them carts, you know? I shouldn’t feel that way. But they do some dumb things, you know?” Maurer laughs.

The Villages is expected to add 3,000 homes to its Sumter County development. Construction could begin this year.