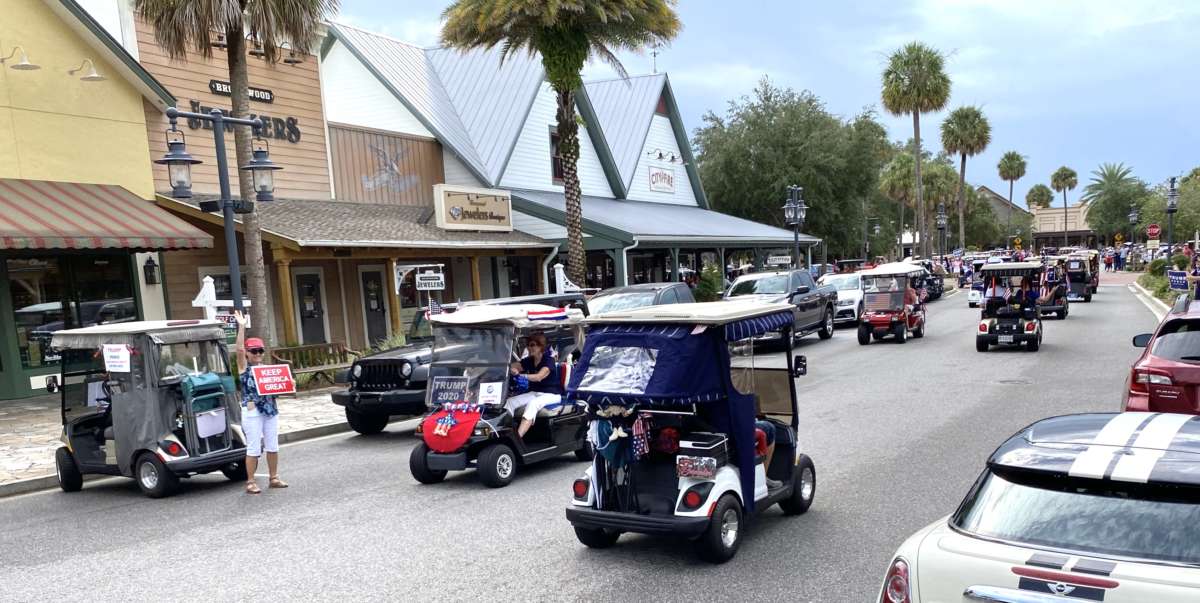 THE VILLAGES — Campaign season is underway in The Villages, and that means massive golf cart parades.

For residents of this large retirement community, golf carts are a primary mode of transportation. They are also a potent means of political self-expression.

Supporters of President Donald Trump gathered for one of those parades Saturday afternoon.

It was a festive atmosphere — brimming social banter and political jokes — as hundreds of golf carts were lined up ready to start at the Lake Miona recreation center.  There were handmade signs, large flags and Trump posters.

Hundreds of carts were queued up for the parade. Photo: Joe Byrnes, WMFE

Then for more than 20 minutes they filed out of the parking lot and onto the path along Buena Vista Boulevard.

Some honked their horns. Some shouted, “Four more years.”

They rolled into Brownwood Paddock Square and snaked along the streets while several people cheered from street corners.

“We’re hoping to get new supporters and let the people know how many people here support our president,” she said.

You won’t see yard signs in The Villages. They’re against the rules. You will see signs on golf carts.

Democratic club president Chris Stanley says some for them are more like floats.

“Some people will put stickers on every bit of the golf cart. You can’t see what color’s underneath,” she said. “And they’ll put in little static banners so it looks as though a candidate is riding with them.”

On the other hand, many residents won’t advertise their political views.

Things can get ugly in Florida’s Friendliest Hometown. In June, for instance, a video of a Trump supporter shouting “white power” during a parade drew national condemnation after the president retweeted it.

“People feel emboldened now to act like Trump does,” Stanley said. “We were all raised where if you couldn’t say something nice, don’t say anything at all. That rule seems to have gone completely out the window.”

That, of course, is not what Trump supporters like Dick Clapp are saying.

“Because of all the rioting and everything that’s going on,” he said, “there’s a lot of people that are not coming out saying they’re Trump people, though in this environment here it’s a lot easier.

“Though we get abused,” he added and chuckled.

For Saturday’s parade, Rosalie Dominquez brought a golf cart with an “I’m a Trump Girl” sign up front, Victory 2020 posters, a giant flag and a QAnon sticker.

“Well, first of all I am a Trump girl,” she said. “When he walked down the elevator, I knew we needed a businessman. And that’s who we got and there’s no baloney with him at all. ”

It was not her first parade.

“It’s fun, because we are fun people. We are happy. We’re not angry. The Democrats are angry people.”

She wore a face shield but hardly anyone else was wearing a mask.

The Democratic club had its own golf cart event the previous week. Anne Timoner and her husband, Julian, led that one. Their four-seater is decked out with a vote-by-mail message, photos of  former Vice President Joe Biden and Sen. Kamala Harris, a wooden map of Florida and a Democratic donkey kicking up its heels.

“One of the reasons for the parades is to wake up this community that there are many more Democrats than people think,” Anne Timoner said.

She is sold on Biden and loves his choice for running mate.

“The country is ready for an honest, calm leader, experienced in government, in international relations, good with epidemics.”

Their next parade should have a practical goal, Stanley said. “And so we may plan something for early vote and have everyone go together in a parade to vote together.”