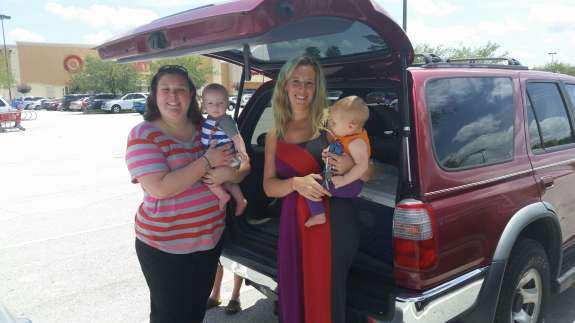 Florida now has its first milk bank for donated breast milk for babies – it’s in Orlando. But long before now, mothers in central Florida have been sharing milk. A new UCF study sheds light on these unregulated milk sharing networks.

Lora Vail wasn’t able to produce enough of her own breast milk for her son Cooper who is now 5 1/2 months. So she finds donors through local groups such as Get Pumped and Human Milk 4 Human Babies. Mothers in need and those with an extra supply of breast milk post to these group’s Facebook pages. They meet wherever is convenient… such as strip mall parking lots.

“I’ve received milk from people who came to Disney for vacation and they had an oversupply and they were pumping milk and they’re like we can’t take it home with us, we’re traveling,” said Vail.

Chelsea Bossory is a local milk donor. She pulled up the hatchback of her SUV to show her vehicle full of milk for delivery.“I have it in a big cooler. I steal my husband’s beer cooler and I just put a bunch of ice packs in there and it lasts for a couple of hours in there without thawing,” said Bossory.

Vail and little Cooper have used Bossory’s milk before. It’s easy to see this really is a tight-knit local network. A new UCF study found what these women already know: breast milk sharing is thriving in central Florida. The online study found much of the sharing was happening among high income, college educated white women with one or two children.

Shannon Carter, co-author of the study, said they found peer milk sharing is a complex practice.

“So the internet is used sometimes to facilitate milk sharing, sometimes people networked through their own communities and they didn’t use the internet and sometimes milk sharing was in the form of cross-nursing, where a women breastfeeds another baby and that absolutely doesn’t happen online,” said Carter.

The study also found the buying, selling and shipping of breast milk was rare in central Florida. Milk donor Chelsea Bossory explains why she gifts her extra breast milk to families in need.

“It’s hard; I mean you’re pumping, you’re washing these pump pieces, it’s such a pain to freeze it, it’s a pain! So if you want to be compensated for it, absolutely, but for me it’s just… I mean every once in a while I get to see pictures of these babies that I’m feeding and I get choked up; it’s just awesome,” said Bossory.

Lora Vail is suspicious of people selling breast milk. There have been national headlines of scandals where people sell milk online that’s tainted with cow milk or formula powder.

“Personally, I feel sometimes if someone’s donating it to you they’re usually doing it for the right reasons,” said Vail.

UCF researcher Shannon Carter says we don’t know if the milk mothers are sharing is safe because it’s never been tested– but it will be soon. The university also plans to do more in-depth interviews with women who are sharing breast milk, and to look into what’s happening with peer milk sharing in local minority communities.

Meanwhile, mothers like Lora Vail are continuing to do what they think is best for their babies. Right now, Vail’s able to collect enough donated breast milk to give her son Cooper a half- breast milk, half- formula diet.

“I would like to as long as possible, if I was nursing him we would do it until he was probably two years old, it really is just the perfect food for babies.”

Vail says she knows there can be a stigma to informal milk sharing but she will do whatever it takes to get Cooper the best start in life.