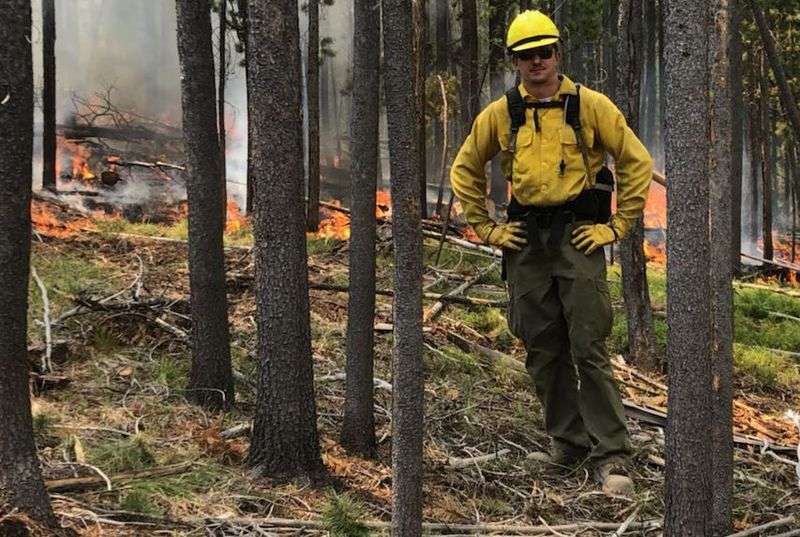 In what typically would have been a clear summer day in the Northern Rockies in western Montana, firefighter Joshua Evertsen strapped on a mask to shield his face from the thick smoke and extreme heat from the racing wildfires.

The sky was the color of rust, and the landscape tinted orange. He then got to work ditching trenches and spreading water to battle back the flames while wearing long-sleeved protective gear, heavy boots and a pack in the 100-degree temperature.

“You definitely feel the heat while working, but you’re not thinking about it,” Evertsen said. “You just want to get the job done … Ever since I’ve taken this job, it’s always been about protecting lives and property, and people’s livelihoods.”

Evertsen, 25, was among several Seminole County firefighters deployed in July and August to western Montana and northern California to battle blazes that have scorched hundreds of thousands of acres. Wildfires have also decimated millions of acres and forced thousands of residents in 13 western states to evacuate this year because of extreme drought conditions.

National forests in the Pacific Southwest, including California and Nevada, are closed through Sept. 17 because of the wildfires and drought conditions, spoiling plans for Labor Day visitors.

Scientists across the globe and a recent report by the United Nations Intergovernmental Panel on Climate Change, say that rising global temperatures have exacerbated droughts in the western states causing wildfires and increased rainfall in the eastern areas leading to flooding.

“Higher temperatures and drought aren’t unusual in the West,” said Laura Brush, resilience fellow at the Center for Climate and Energy Solutions in Arlington, Virginia. “But climate change has made them more intense and more frequent. Both extreme heat and drought are contributing to more severe and extensive wildfires, which are fueled by drier vegetation.”

Zach Zobel, a scientist at the Woodwell Climate Research Center in Falmouth, Massachusetts, said the causes for wildfires are complex and multifaceted. Still, scientists today are more able to say that large-scale weather events — such as droughts and hurricanes — have worsened because of climate change.

Basically, as temperatures rise with climate change, more water evaporates from the soil and makes the vegetation drier. It also creates so-called “dry thunderstorms” that produce lightning but most of the rain evaporates before reaching the ground, he said.

“The fires burn hot enough and big enough that they can produce their own lightning fields,” he said.

In recent years, the length of the rainy seasons in the western United States have become shorter and the dry seasons have become longer, increasing the amount of dry vegetation, and leading to more and larger wildfires, Zobel said.

As of this week, there are 45 wildfires burning across 700,000 acres in the northern Rockies of Montana where Seminole firefighters worked. Many of those fires were sparked by lightning hitting the dry ground.

Also, western Montana received less than a quarter-inch of rain — all on July 1 — for that entire month, according to records with the National Weather Service.

In Florida, the peak wildfire season strikes from March through May when the state receives the least amount of rainfall and there is less humidity. In spring and early summer of 1998, more than 500,000 acres burned throughout the east coast of Florida, destroying homes and shutting down more than a hundred miles of Interstate 95.

Evertsen, who generally works out of county Fire Station 12 in Altamonte Springs, spent 14 days straight in July with a 20-man crew battling the Trailer Creek fire near the Idaho border, which was sparked by lightning July 8. Today, it is only about 58% contained.

The Seminole County men are certified as wildland firefighters and signed up to work through the Florida Fire Service.

“It’s really heartbreaking to see these fires,” said Ryan Hart, 35, a Seminole firefighter and paramedic, who has fought western wildfires for the past decade. “They will burn a forest with hundred-year-old trees to basically nothing … It’s hard work. It’s very labor-intensive. And you won’t even see the sun. It’s an orange ball in the sky, and everything is covered in smoke.”

Hart — who regularly works out of Fire Station 27 off Red Bug Road — arrived in western Montana just north of Thompson Falls on July 28 and spent two weeks with a 20-man team battling a 12,000-acre blaze. That fire has since grown to about 39,000 acres.

One of his team’s primary tasks was digging trenches and trails to separate the flames from the dry vegetation.

“I wasn’t expecting it to be 109 degrees on some days,” said Hart, who has fought wildfires in past years in The Everglades, Tennessee, Louisiana, Oregon, and California. “Wildland fires have always fascinated me …You learn to read the weather. The direction of the wind … And you have to be on top of your game.”

The amount of people and resources committed to fighting a wildfire is extraordinarily larger than battling a structure blaze, Hart said.

“Some of the fires I’ve been on, you had to drive 200 miles to drive around it,” he said. “It’s super labor-intensive. It’s more of a larger scale than a structure fire.”

The extreme drought conditions in western states have made this year’s fires particularly worse, he said. Hart also pointed out that some areas could conduct more prescribed burns to eliminate much of the dry vegetation.

“I’d like to think that we could prevent some of these [fires] with proper management, with prescribed burns,” he said.

“The added experience of some of our team members fighting wildfires in Montana and other areas in the U.S. ultimately helps give them more hands-on experience that can be utilized to better serve Seminole County,” he said in an email.

This story was produced in partnership with the Florida Climate Reporting Network, a multi-newsroom initiative founded by the Miami Herald, the South Florida Sun Sentinel, The Palm Beach Post, the Orlando Sentinel, WLRN Public Media and the Tampa Bay Times.