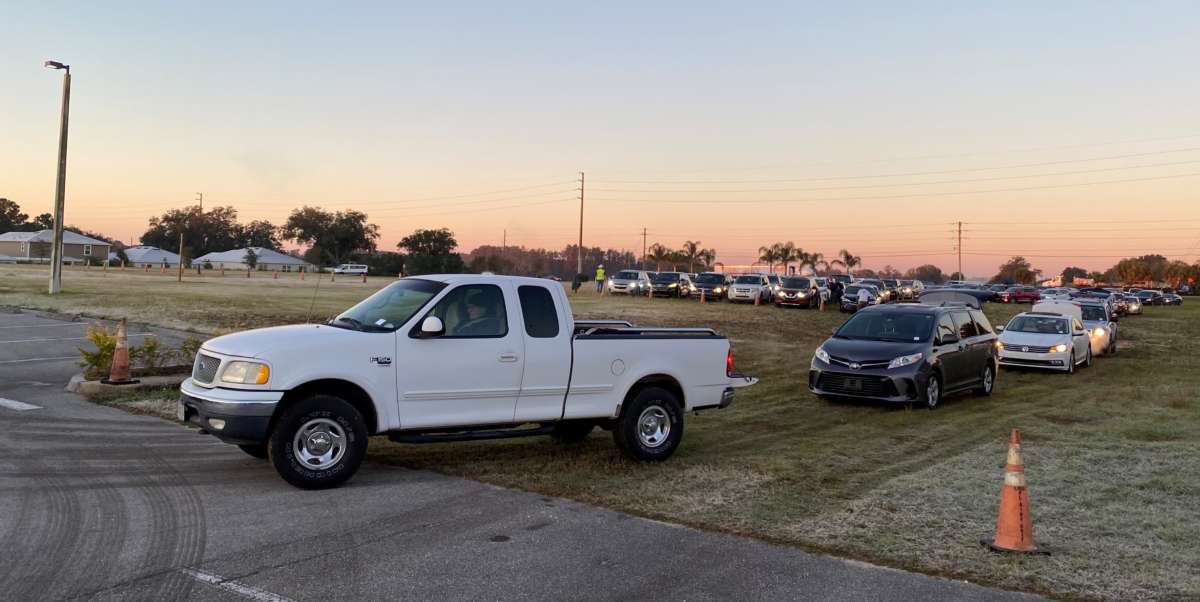 While Congress struggles to compromise on a COVID-19 relief package, the people who help feed the hungry in Central Florida see an emerging crisis.

The need was evident at a food distribution event in Groveland earlier this week.

Sixty-eight-year-old singer and remodeler Dave Hodges was in a van with wife, Sarah, waiting for the Second Harvest food drop to get underway.

“It’s been really, really tough,” he said. “And thank God they have things like this going on.”

He has been unable to find work.

“I have several records out and we have concerts set up in Kentucky, down in South Florida. Everything’s been canceled out for a long, long time. So we’re doing … tough.”

The disabled Air Force veteran recently lost a friend to COVID-19 and worries about his own health.

Mom and stepmom of five Sabrina Baker faces all sorts of challenges.

“I got the kids at the house because we’re too scared to let them go to school, traditional school,” she said. “So we’re facing that, where they have to all be on laptops and stuff like that. And then, I’m not working. My husband is getting hours, but barely, because of where work at.”

Two weeks of groceries will help.

Sammy Adkins has been unemployed since February. He lives on his own in Groveland but spends a lot of time with his son’s family because he is so depressed.

“I’m 64 years old, and I’ve never been this low in my life, to be honest with you,” Adkins said. “It’s hard, hard to comprehend, very hard.”

Those are a few of the 800 or so families finding help during a special food drop at Hope International Church on Wednesday.

Spanish-language Pastor Jorge Mulet says the church would usually provide 210 families with a box of food every week, thanks to the Farmers to Families Food Box program.

“I got some of my people who pick up here, they have been out of a job for six months,” he said. “And that box of food, believe it or not, it was feeding a husband, wife and two kids.”

That’s gone now — that federal program meant to last through December 31st has fallen short. And Kelly Quintero with Second Harvest says families are facing what she calls a “food cliff.”

Second Harvest gets most of its food from other sources, but nonprofits and churches were relying on those boxes to meet the needs of furloughed theme park employees and others, she says.

“Through no fault of ours nor the pastors at all, we just don’t know where that food is coming from,” Quintero said. “There’s no additional funding for it right now. And that’s going to create such a vast need that we don’t even have a full picture of what that’s going to look like.”

Quintero says the food bank may have to take a hard look at its programs and ask the community to do even more.

“We know that they’ve done so much, but this is going to be a massive problem.”

On the federal level, Second Harvest is advocating for an increase in SNAP benefits, also known as food stamps. For every meal provided by a food bank, she says, SNAP provides nine.

The bipartisan $908 billion Emergency COVID Relief Act struggling to take shape in the U.S. Senate would help with that.