Central Florida Comes Out in Support of George Floyd: What’s Happened So Far and What Could Happen this Week 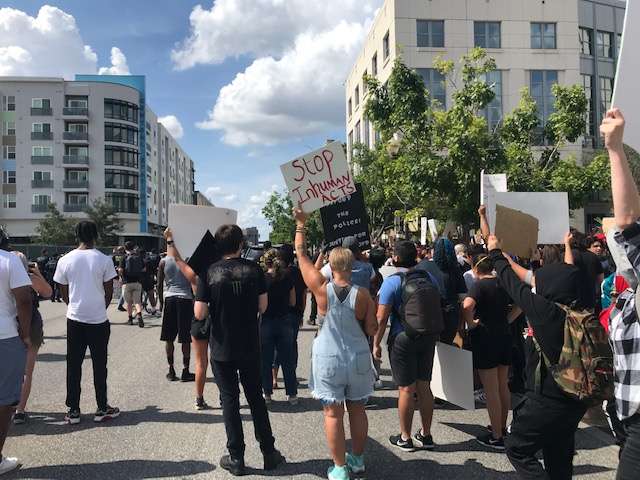 Over the weekend, people gathered in Central Florida to show solidarity with George Floyd and protest his death. Floyd, an African American died in police custody. Former Minneapolis police officer Derek Chauvin has been charged with his murder.

90.7’s Danielle Prieur was at some of these events over the weekend. She talked to 90.7’s Morning Edition host Talia Blake.

Talia: Danielle, tell me about this event in Eatonville? What happened?

Danielle: People at the event which they called “Pull Up for George Floyd” wanted to show solidarity with Floyd and his family by registering residents to vote.

Equal Ground community organizer Justin Jones said it was only through voting that elected leaders in the criminal justice system could be held accountable for their actions.

Jones also said the group was collecting cards and letters of condolence for Floyd’s family. He said there were many ways to protest, and this was theirs.

Talia: A little later in the day you were at a protest in downtown Orlando. Tell me about that?

Danielle: So that was the Black Lives Matter protest. It was a peaceful protest. Very hot. Hundreds of people were holding signs that said “Stop Killing Us” and chanting “No Justice, No Peace” and “Hands Up, Don’t Shoot.”

People ended up marching down Orange Ave and the streets had been blocked off so they could pass through downtown.

I spoke with college-aged protesters like Maiyah Banks. She said she was there to represent the past and future victims of police brutality.

I also spoke with families like DeShana Honore and her two-year-old son Carter and five-year-old son Noah. Carter wore a Pikachu backpack. She said she wanted them to feel the energy, and the sense of community.

Talia: What did people at these events say they wanted to accomplish?

Danielle: At the event in Eatonville, Justin Jones said he wanted to bring awareness to a criminal justice system that is failing people. He said he wants to make sure people are engaged in the political process in order to get corrupt leaders out of office.

And at the protest-Deshana Honore said she wanted her boys to be in the belly of the beast, to grow up knowing it was not OK for police to go around killing people without any consequences.

Maiyah Banks said she was there to be a voice, a change. She called for empathy but not sympathy, as she said any child black or white could be the victim of police brutality.

Talia: Tell me about the police response at both events?

Danielle: At the first event in Eatonville, police officers would drive by to make sure volunteers weren’t blocking the road, but there was a very light police presence.

There was a very heavy police presence at the protest in downtown Orlando. When I was there police were on bikes, on foot, and nearby in their cars. There was also a helicopter overhead.

Later that day, when protesters walked up to the 408 there was an altercation between the group and Orlando Police officers. Officers told protesters to leave and then deployed tear gas at the protesters who lobbed the cans back at officers.

But he said he condemned violence of any kind from officers or protesters.

Talia: Where do we stand now?

Danielle: Demings and Orlando Mayor Buddy Dyer announced that they would be enacting a curfew in unincorporated Orange County and the City of Orlando starting Sunday. It runs from 10 pm to 5 am daily until further notice.

Orlando Police Chief Orlando Rolon said two men in their 20s and 30s were arrested at the protests in downtown Orlando.

Another six people were arrested on the 408, and another eight were arrested in connection with vandalism of stores near The Mall at Millenia.

These protests are part of a larger nationwide movement which appears to be picking up momentum.

Here in Central Florida, protests continue at the Windermere home of former police officer Derek Chauvin, and other protests are planned in Orlando this week.

TONIGHT: there is a curfew in effect for the City of Orlando. pic.twitter.com/7DzgBRqYu0

To listen to the conversation, click on the clip above.