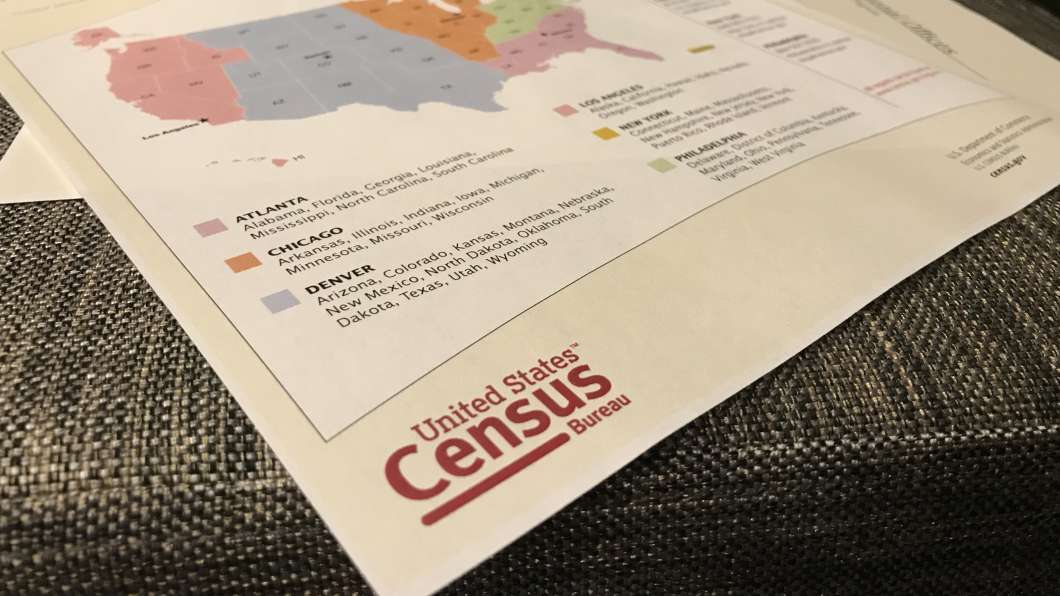 A map shows the locations of the U.S. Census Bureau's regional offices for the 2020 census.
Image credit: Hansi Lo Wang

A recent Census Bureau request submitted to the White House suggests the Trump administration will not support Obama-era proposals to change how the U.S. government collects information about race and ethnicity, census experts say.

If approved, the proposals would change how the Latino population is counted and create a new checkbox on federal surveys for people with roots in the Middle East or North Africa. Research by the Census Bureau shows these revisions could improve the accuracy of the upcoming national headcount in 2020. Any changes would carry wide implications for legislative redistricting, civil rights laws and health statistics.

So far, though, the White House’s Office of Management and Budget, which sets the standards for race and ethnicity data for federal agencies, has not released any decisions. OMB has also not responded to NPR’s request for comment.

Still, census watchers say Census Bureau documents posted on OMB’s website this week provide a signal of where the Trump administration stands on these proposals.

“I think this is a big one,” says John Thompson, a former director of the Census Bureau who left the agency last year, referring to the significance of the documents.

They detail the bureau’s request to change the questionnaire set to be used in an upcoming practice run of the 2020 census — known as the End-to-End Census Test — taking place this year in Rhode Island’s Providence County.

To prepare for potential policy changes on race and ethnicity data, that questionnaire, as submitted to OMB last year for approval, originally followed the Obama-era proposals. It combined the two census questions about race and Hispanic origin required by the current federal standards into one question, with “Hispanic, Latino, or Spanish” as an option for both race and ethnicity. Among the other checkboxes under the combined question was “Middle Eastern or North African,” which was separate from “White.”

But the Census Bureau has now submitted a request to go back to two separate questions with no checkbox for “Middle Eastern or North African.”

A spokesperson for the bureau, Michael Cook, declined to comment on the request to OMB, which he said would be discussed at the bureau’s next public meeting on 2020 census preparations scheduled for Friday.

Thompson, the former Census Bureau director, considers the request a sign that the bureau has gotten word that OMB will not change the federal standards on race and ethnicity data.

If that is indeed the case, Thompson says lawmakers on Capitol Hill could step in later to proceed with the proposed changes before the 2020 census.

“Anything can happen,” he says. “Congress can pass a law.”

Other census watchers say they’re disappointed that the Trump administration appears to have decided to not follow the recommendations of Census Bureau staffers who spent years researching how to collect more accurate race and ethnicity data.

“The decision to ignore years of research and the expert advice of scientists is a blow to science and the collection of the best data possible,” said Arturo Vargas, executive director of the National Association of Latino Elected and Appointed Officials Educational Fund, in a written statement.

While the wait continues for an official announcement of OMB’s decision on the proposals, the Census Bureau is expected to release its report to Congress on the final wording of the 2020 census questions — including those about race and ethnicity — by the end of March.