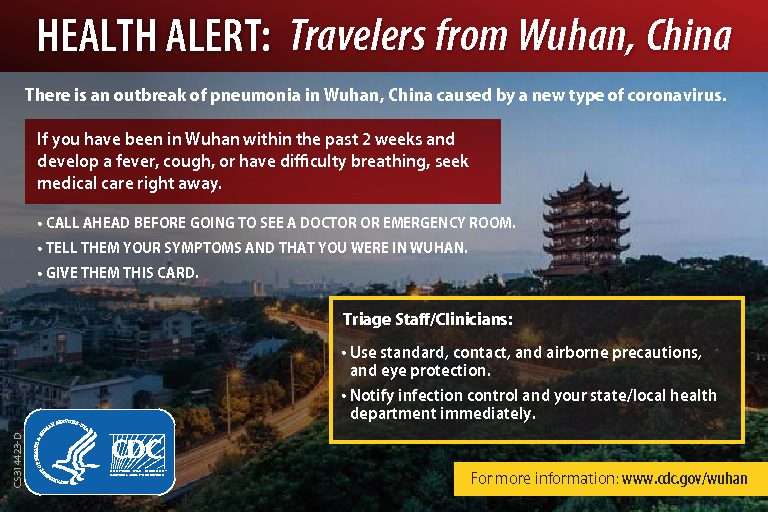 The woman in her 60s returned from China on Jan. 13 without showing any signs of illness, but a few days later she called her doctor to report feeling sick. The patient is doing well and remains hospitalized to prevent the spread of infection.

The U.S. Centers for Disease Control and Prevention said that in addition to the two people who are confirmed to have the new coronavirus, another 50 are being monitored. Eleven people tested negative.

Dr. Nancy Messonnier, the director of the CDC’s National Center for Immunization and Respiratory Diseases, said the screening test for the new virus takes four to six hours to complete. The CDC is working to get testing kits out to all 50 states so that screening for the virus can happen faster.

“Part of the delay is the samples getting to CDC, and it is entirely one of the reasons that we’re focused on, as rapidly as possible, getting those tests out closer to the patients so the results can become available more quickly,” Messonnier said.

The CDC is screening people coming to the airport from Wuhan, China, on direct flights in five cities: Atlanta, Chicago, Los Angeles, New York City and San Francisco. Travelers are being given cards saying that if they develop a fever, cough or have trouble breathing in the next two weeks, immediately contact a health care provider.

“We ask clinicians and travelers and the entire community to be very vigilant,” Messonnier said, adding that the symptoms are similar to the flu. “We want everyone to err on the side of caution. If they have those symptoms and a travel history, then call their health care provider right away.”

Coronaviruses are a large family of viruses, with some causing illness in people and others circulating among animals. This virus is believed to have come from animals and is now able to be spread from person to person. Past examples include the Middle East respiratory syndrome (MERS) and severe acute respiratory syndrome (SARS).