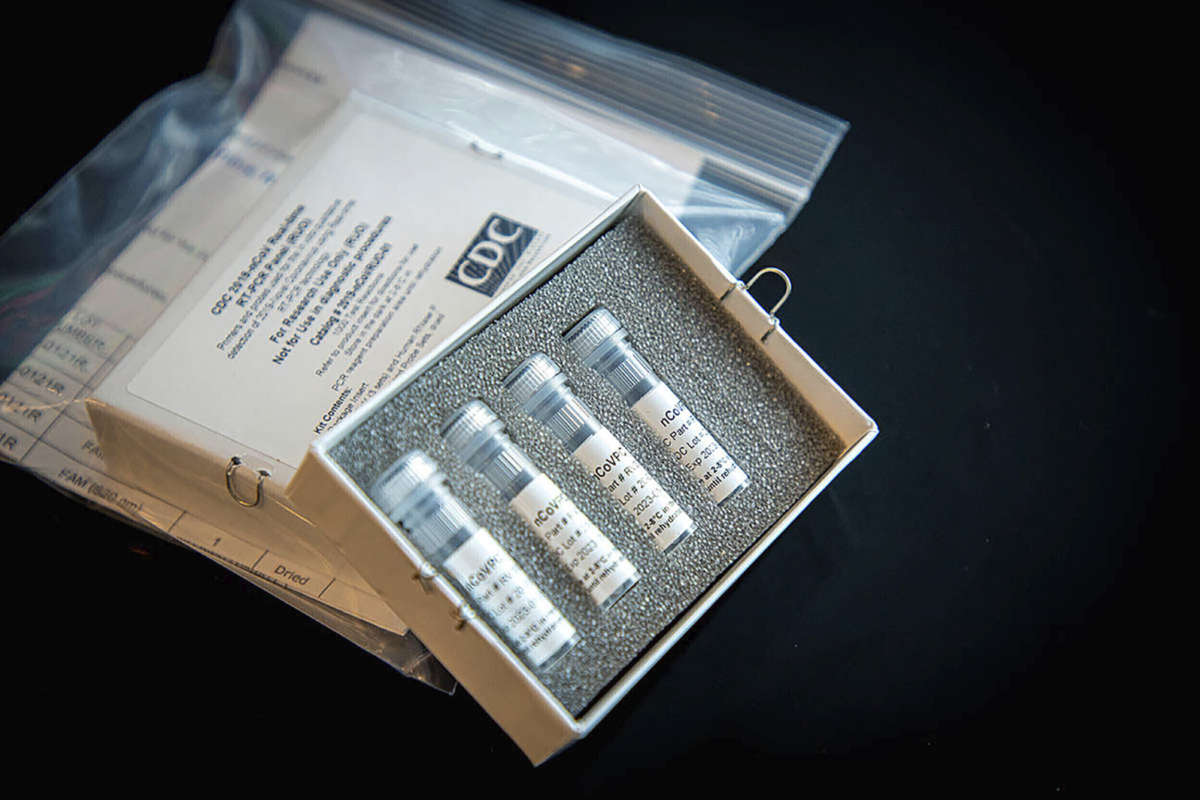 The flawed coronavirus test kits went out to public laboratories in February. An internal Centers for Disease Control and Prevention review obtained by NPR says the wrong quality control protocols were used.

On Feb. 6, a scientist in a small infectious disease lab on the Centers for Disease Control and Prevention campus in Atlanta was putting a coronavirus test kit through its final paces. The lab designed and built the diagnostic test in record time, and the little vials that contained necessary reagents to identify the virus were boxed up and ready to go. But NPR has learned the results of that final quality control test suggested something troubling — it said the kit could fail 33% of the time.

Under normal circumstances, that kind of result would stop a test in its tracks, half a dozen public and private lab officials told NPR. But an internal CDC review obtained by NPR confirms that lab officials decided to release the kit anyway. This is the first time the early detection of a problem has been reported. The revelation comes from a CDC internal review, known as a “root-cause analysis,” which the agency conducted to understand why an early coronavirus test didn’t work properly and wound up costing scientists precious weeks in the early days of a pandemic.

In addition to learning of the early warning, reviewers determined the Respiratory Viruses Diagnostic Laboratory, run by a highly regarded scientist named Stephen Lindstrom, was beset with problems, including “process failures, a lack of appropriate recognized laboratory quality standards, and organizational problems related to the support and management of a laboratory supporting an outbreak response,” the review said.

The CDC declined to make Lindstrom or anyone else available for an interview and declined to discuss the unreleased internal review. A spokesman would only say that the agency had “acknowledged and corrected mistakes along the way.”

In late January, the tally of confirmed COVID-19 cases seemed relatively manageable — about 4,500 confirmed cases worldwide and under a dozen confirmed in the continental United States. In a pandemic, public health officials say, the best hope to keep the numbers low is to determine who else might have the virus and where it was spreading and then concentrate efforts on those areas first.

The CDC’s coronavirus test kits began arriving at the 100 or so public labs across the country in small white boxes on Feb. 6, according to the CDC timeline in the review. Each cardboard container held four tiny vials of chemicals that, when used properly, were meant to confirm the presence of the virus.

The New York City Public Health Laboratory was in that first wave of labs receiving the kits, and its director, Jennifer Rakeman, said her technicians began trying to verify the test right away. Verification is a standard protocol; it involves following detailed instructions to ensure the tests work the same way in an outside lab as they do at the CDC labs in Atlanta.

The first three vials in the box were specific to the coronavirus, and the fourth was a control that let the labs know the specimen they were examining was a good one. Essentially, Rakeman said, it lets you know if the swab went all the way up a patient’s nose and wasn’t just “waved in the air.”

By Feb. 8, hours after her lab started verifying the test kits, Rakeman said she began receiving panicked emails from colleagues. Something, they said, was wrong: They had run the tests dozens of times but were getting inconclusive results from two of the reagents, or chemicals, in the vials.

Rakeman began calling other labs to see if they were experiencing the same problem, and they said they were. “It was very truly an ‘oh, crap’ moment,” Rakeman said. “These reagents aren’t working; everybody is waiting for us all over the city to have this test online. We think we have more cases than we’ve been able to detect and the test isn’t working.”

She said trying to battle COVID-19, which was just starting to rage through New York, without a test was like trying to build a house with a saw but no hammer. “And we need that hammer. We need that other tool, we need that test,” she said.

When the complaints reached the CDC, leaders at the lab said they suspected the problem was contamination, according to Department of Health and Human Services officials who spoke to them at the time. Low-level contamination was to blame for a problem with a Middle East respiratory syndrome CDC test years ago. Microscopic residue could roil and ruin a sensitive test such as the one built to find the coronavirus.

Key CDC officials thought that might be the problem, too. “Contamination is one possible explanation, but there are others, and I can’t really comment on what is an ongoing investigation,” Nancy Messonnier, director of the CDC’s National Center for Immunization and Respiratory Diseases, told reporters in March.

The contamination theory gained momentum after Timothy Stenzel, director of the Food and Drug Administration’s Office of In Vitro Diagnostics and Radiological Health, visited the respiratory disease lab a few weeks later.

He returned to his superiors in Washington, D.C., saying he found sloppy lab protocols. Researchers entered and exited the coronavirus laboratories without changing their coats, he said. Testing ingredients were assembled in the same room where researchers had been working on positive coronavirus samples, he told them, according to three officials who were part of the discussion at the time. These are the sorts of things that can introduce microscopic contamination.

CDC and HHS officials disagree with Stenzel’s characterization of the lab. One former CDC official who was there when he arrived said the issues were small. “It was beakers on a counter that were empty and washed within 7 feet of a negative pressure hood. He called that dirty. Was that protocol? No. But it wasn’t a dirty lab.”

The FDA declined to make Stenzel available for this story.

While the CDC and HHS were trying to determine what was wrong with the kits, public labs were still waiting for something they could use. “We waited another month before we had testing available,” Rakeman told NPR.

“Absence or failure of document control”

Lindstrom, who led the respiratory disease lab, had invented diagnostic tests in the past. Before he went to the infectious diseases lab, he was running a different CDC lab, one that focused on influenza.

When he was there, he had helped create the diagnostic tests that were used to identify H1N1 in patients, and there were no issues with the test. The FDA quickly approved the kits and sent them to labs across the country. Within days, the same kits were dispatched around the world. The effort was considered a triumph for the CDC, and Lindstrom was viewed internally as the guy who made it happen.

The influenza lab, however, had an infrastructure and systematic way of responding to flu outbreaks, and because of that Lindstrom and his team just had to do the science, one official said. The infrastructure was already there to help. COVID-19 was different. When Lindstrom first built the test at the infectious disease lab, for instance, he didn’t have any human sample of the virus, so it had to be manufactured.

What’s more, officials say, Lindstrom built the coronavirus test the same way he would have built one for influenza. It was, after all, what he knew best. The problem was, the coronavirus had more in common with SARS or MERS — respiratory diseases that hit the Middle East and Asia in 2002 and 2012 — than something like H1N1.

HHS officials said there was nothing intrinsically wrong with the test Lindstrom’s lab built but had Lindstrom been at the infectious disease lab longer, he might have pulled a MERS test out of the freezer and used that as the template for a coronavirus test instead because it had more in common with a respiratory virus than influenza did.

Because the respiratory disease lab had fewer entrenched systems than Lindstrom’s previous lab, the review also found that basic mistakes were made. “The absence or failure of document control to ensure the use of a single verified correct test quality control procedure matching [Emergency Use Authorization] procedure,” the review said, “resulted in deficiencies.”

The FDA had required a particular protocol be followed when designing the test, and the lab didn’t seem to be using the correct one, it said. “The first round of [quality control] for final kit release used an ‘incorrect’ testing procedure,” it said. “Later in the timeline, detection of a 33 percent kit failure” using the correct quality control protocols “did not result in a kit recall or a performance alert.”

Kelly Wroblewski, director of infectious diseases at the Association of Public Health Laboratories, said she was surprised that Lindstrom’s lab would be called out for something as basic as quality control. That hasn’t been her experience. “I’ve done studies with Steve, and he’s meticulous in so many ways so the documentation failure is really surprising,” she said.

When the lab ran the very last quality control test, using the correct Emergency Use Authorization procedures and showing a possible 33% failure rate, it was Feb. 6, according to the review. The kits, with their four little vials, were already in their boxes. There was time to recall them before they went out, but Lindstrom decided not to do that, three officials familiar with the review said.

One HHS official told NPR this shouldn’t have been a tough call. “The QC records showed that the test had a problem,” the official said. “Lindstrom signed off on a quality control that was clearly flawed. He should not have released that kit.”

Wroblewski agreed. “The thing that hangs me up most is probably the 33% and not recalling or not immediately going to remanufacture or something at that point,” she said, “because 33% is clearly a lot.”

Compounding the problem, officials said, was the fact that the CDC had not established specific benchmarks for the test. There was not, for example, an agency directive that said the test needed to be correct some specific percentage of the time before it could be released.

Obviously, the CDC would like the tests to be completely accurate, one official told NPR, but something less than that is typically acceptable, particularly during a public health crisis.

Because there was no benchmark set for acceptance, it became Lindstrom’s call. He appears to have decided either that the last quality control test was wrong or that the 33% failure rate was acceptable, officials said.

The inspector general for HHS is also investigating why that first coronavirus test failed and has not yet completed its report.

The CDC review has some recommendations so a failure such as this one doesn’t happen again. Among them: setting specific criteria that must be met before test kits can go to public labs, and now requiring that an outside group reviews all the CDC tests.

NPR has confirmed that Lindstrom is no longer in the respiratory disease lab, and the CDC has effectively removed all the leadership from the division of viral diseases that oversaw the lab. A CDC spokesman declined to discuss CDC personnel issues.