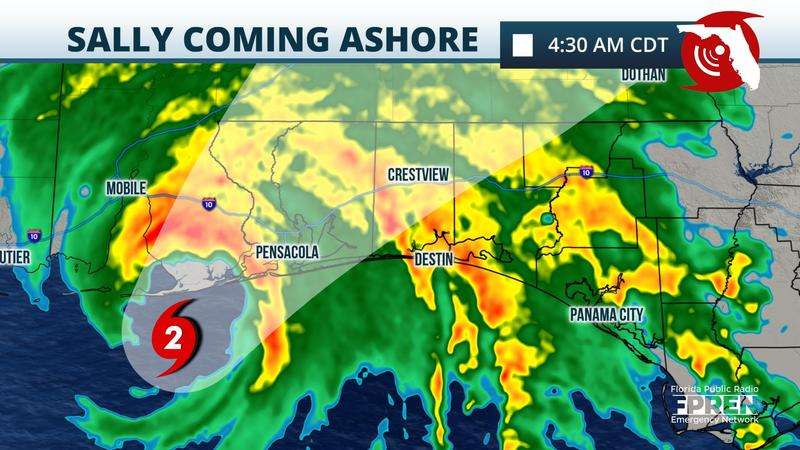 Hurricane Sally strengthened to a category 2 storm during the overnight hours of Tuesday with top sustained winds of 105 mph.

The northern and eastern eyewall was moving over the Alabama coastline and Escambia County, Florida based on radar observations early Wednesday morning. The center of the eye is forecast to come ashore between Mobile and Pensacola during the midday hours of Wednesday. Hurricane force conditions were occurring in the western Panhandle based on ground reports from wind sensors.

Flash Flood Warnings continued over a large portion of the Florida Panhandle from Panama City westward. Rainfall estimates from doppler radar indicate between 1 and 2 feet of rain have already fallen, particularly south of Interstate 10 in Escambia, Santa Rosa and Okaloosa counties. Upwards of a foot of rain has fallen in the Panama City area based on radar estimates.

Tornado Watches continued for much of the Panhandle, and several tornado warnings have been issued between Destin and Panama City as of early Wednesday morning.

Another foot of rain is forecast over the western Panhandle through Thursday, which is expected to exacerbate the ongoing flash flooding. Effects from the storm are possible as far east as Tallahassee, Jacksonville, Gainesville and the Nature Coast area, where occasional rain bands may lead to isolated areas of flash flooding and brief tornadoes Wednesday afternoon and night.

Conditions are expected to slowly improve Thursday evening as the storm weakens and pulls away from the Gulf Coast. However, torrential rain is also expected to impact the Carolinas Thursday and Friday before the remnant of Sally finally merges with a cold front and moves into the Atlantic.