Cassini Spacecraft Starts Weaving Between Saturn And Its Rings 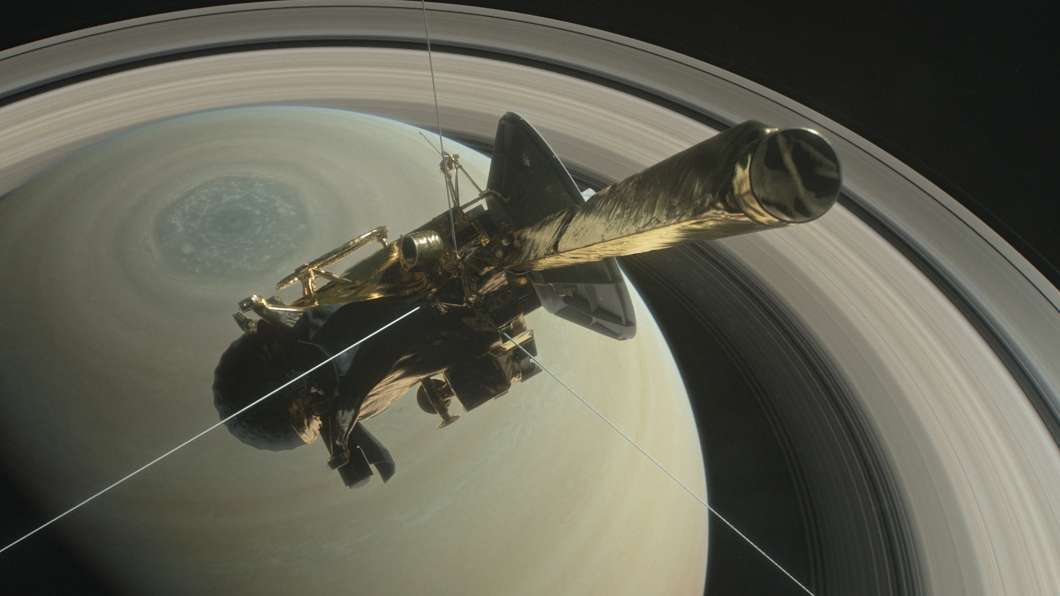 NASA's Cassini spacecraft made its first dive between Saturn and its rings early Wednesday, as the final act in a nearly 20-year mission.

If all goes to plan, NASA’s Cassini spacecraft will beam new images of Saturn and its rings to Earth early Thursday, sharing data collected Wednesday from its first dive through the gap between the planet and its striped belt of ice and rock particles.

Today’s dive also marks the start of the final phase in the craft’s 13-year visit to Saturn. Days ago, it used the gravity of Saturn’s moon Titan to bend its path toward its eventual destruction on the planet.

Cassini descended below the ring plane around 5 a.m. ET Wednesday, but the antenna it would normally use to send images is instead being used to deflect potentially harmful objects away from its instruments. As it performed the move, the craft’s Twitter feed announced, “Shields Up!”

“Because that gap is a region no spacecraft has ever explored, Cassini will use its dish-shaped high-gain antenna (13 feet or 4 meters across) as a protective shield while passing through the ring plane,” NASA says. “No particles larger than smoke particles are expected, but the precautionary measure is being taken on the first dive.”

For today’s maneuver, the craft crossed the ring plane as it moved from north to south across Saturn. The gap between Saturn and its rings is about 1,500 miles wide.

Cassini is expected to get back in touch with the Deep Space Network antenna in Goldstone, Calif., by around 3 a.m. ET Thursday; the first images should be available shortly afterward, NASA says.

The move is the first in what NASA is calling Cassini’s Grand Finale, as it weaves its way between Saturn and its rings in a series of 22 dives that will culminate in what the agency describes as “a science-rich plunge into Saturn’s atmosphere on Sept. 15.”

Cassini was launched in 1997; its mission is slated to end one month before the 20-year mark.

Among the photos sent back by Cassini is a unique view of Earth as seen from Saturn, in what was hailed as a new perspective of our “pale blue dot” in space.

When that image was released in 2013, the Two-Way wrote, “Earth and all its trillions of creatures are seen as a speck of light — lower right — in the vastness of space. What’s more, Cassini captures Earth while also capturing Saturn’s rings.”