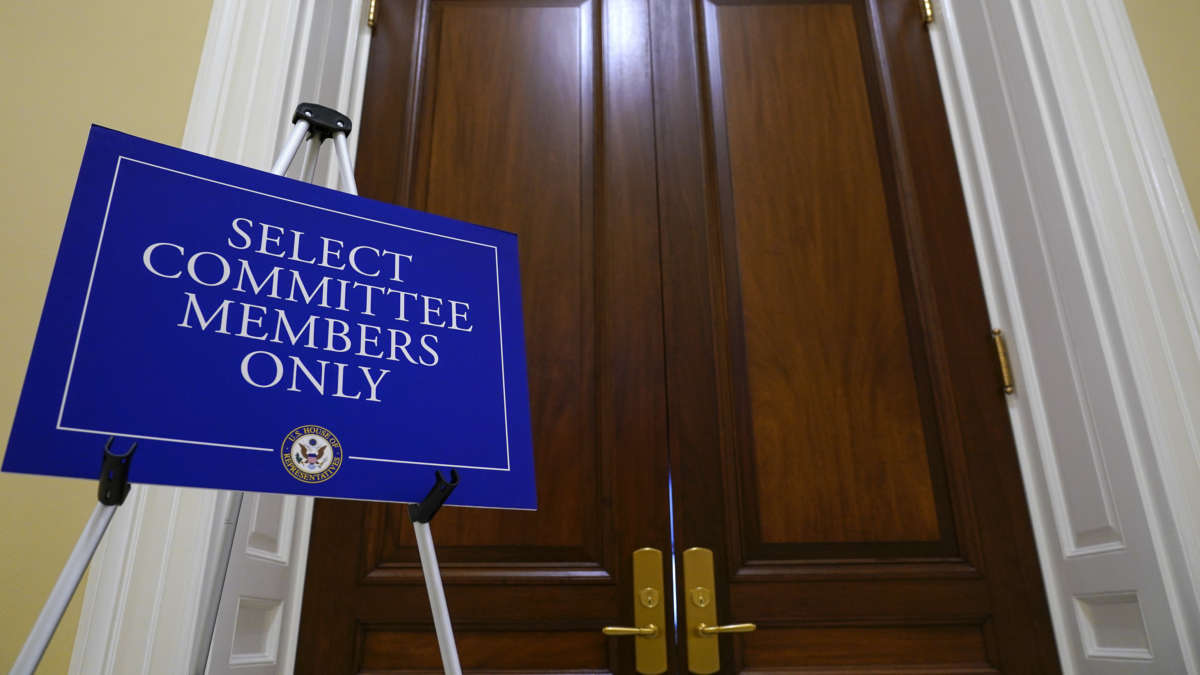 The entrance to the room for the House select committee investigating the Jan. 6 attack is seen after the panel announced Monday it has scheduled a surprise hearing for Tuesday to present evidence it says it recently obtained.
Image credit: J. Scott Applewhite

The Jan. 6 committee held a hearing Tuesday with Cassidy Hutchinson, a former Mark Meadows aide, as a witness. The committee announced the hearing on Monday “to present recently obtained evidence and receive witness testimony” after saying there would be no additional hearings until July.

The story below was updated throughout the hearing.

Influencing witnesses: Panel Vice Chair Liz Cheney says while the committee has seen many witnesses — including many Republicans — testify fully, it has not been true for “every witness.”

“We have received evidence of one particular practice that raises significant concern,” she said.

One witness received phone calls telling them to do “the right thing” and how to “remain in good graces in Trump world,” while being reminded that “Trump does read transcripts,” Cheney said. Another was told Trump “is thinking of you – he knows you’re loyal and you’re going to do the right thing.”

Cheney added that the committee asks for witnesses who were connected to the Trump administration or campaign — whether they’ve been contacted by any of their former colleagues or anyone else who attempted to influence their testimony. Cheney said that attempting to get witnesses to lie in their testimony “presents very serious concerns” and the committee is “carefully considering our next steps.”

More requests for pardons: Former Trump lawyer Rudy Giuliani and chief of staff Mark Meadows both sought pardons as a result of the events of Jan. 6, Hutchinson testified. Trump did not pardon either adviser.

Trump wanted to include language about pardoning the rioters in the speech he recorded and posted calling protesters to go home, but legal counsel advised against it.

Trump thought Pence “deserves” hanging chants: In video testimony, Hutchinson said that on Jan. 6 at the White House she overheard former President Donald Trump along with Mark Meadows, his chief of staff and former White House counsel Pat Cipollone talking about the Capitol rioters and their “hang Mike Pence” chants.

“I remember Pat saying something to the effect of, ‘Mark, we need to do something more. They’re literally calling for the vice president to be effing hung,’ ” Hutchinson said.

“And Mark had responded something to the effect of, ‘You heard him, Pat. He thinks Mike deserves it. He doesn’t think they’re doing anything wrong,’ ” she added, as she refers to the president.

Hutchinson said that Cipollone added, “Something needs to be done, or somebody is going to die and this is going to be on your effing hands.”

Flynn pleads the fifth: Former President Trump spoke with former political adviser Roger Stone and former national security adviser Michael Flynn on the evening of Jan. 5, according to Hutchinson. Stone was photographed with members of the Oath Keepers on Jan. 6, a militia with members who have pleaded guilty to seditious conspiracy in connection with Jan. 6.

Text messages released by a member of the Oath Keepers have shown they discussed providing security for Flynn and Stone on Jan. 6.

Vice Chair Liz Cheney, R-Wyo., showed testimony in which Flynn pleaded the Fifth Amendment several times, including in this exchange:

Cheney: “General do you believe in the peaceful transition of power in the United States?”

Cheney noted that Trump granted Stone clemency and pardoned Flynn, who were both convicted on charges related to misleading federal investigators.

Meadows dialed into a meeting at the Willard Hotel where Trump allies including Rudy Giuliani had set up what they called a “war room” in advance of Jan. 6, Hutchinson testified. She said she urged Meadows against attending in person, which was his original plan.

In the car after the speech: The president was under the impression that he would be taken to the Capitol following his rally speech, Hutchinson said.

When he learned there were no security assets and Trump would have to return to the White House, Trump grew “irate” and attempted to grab the steering wheel of the car, she testified. Hutchinson was not in the car, but heard it from others with no one correcting the record, she said.

” ‘I am the effing president, take me up to the Capitol now,’ ” Hutchinson testified that the president said.

Trump talked about walking to the Capitol, where he might give a speech or enter the House chamber. And when staff stopped those plans, Trump attempted to grab the steering wheel of the presidential limousine to drive there, she said.

“He said to me, ‘We need to make sure that this doesn’t happen. This would be a legally terrible idea for us’ … he then urged me to continue relaying that to Mr. Meadows,” she told the panel.

On the morning of Jan. 6, Cipollone issued another warning.

” ‘Please make sure we don’t go up to the Capitol, Cassidy …We’re going to get charged with every crime imaginable if we make that movement happen,'” she said, adding that charges discussed in the days leading up to the rally were defrauding the electoral count or obstructing justice.

Cipollone, a key attorney in Trump’s Senate impeachment defense, was among the Trump aides who pushed back against a plan to pressure the Justice Department to overturn the 2020 election results, according to a Senate Judiciary Committee report

Trump knew some in crowd on Jan. 6 were armed before urging them to march on the Capitol: In a videotaped testimony, Hutchinson said that when she attended the Jan. 6 rally at the White House ellipse, she overheard a conversation with the president saying he knew people had “many weapons.”

“When we were in the off-stage announce tent, I was part of a conversation … I was in the vicinity of a conversation where I overheard the president say something to the effect of, ‘You know, I don’t effing care that they have weapons. They’re not here to hurt me. Take the effing mags away. Let my people in. They can march to the Capitol from here. Let the people in. Take the effing [magnetometers] away,'” Hutchinson said during her testimony,

“He said something to the effect of, you know, eff the Secret Service. I’m the president. Take the effing mags away. They’re not here to hurt me,'” she added.

Hutchinson also said the White House counsel’s office was worried about Trump’s plans to march to the Capitol would cause legal issues, and were concerned about lines in Trump’s speech that day, including telling people to march on the Capitol and to “fight.”

Trump was informed people were armed by Tony Ornato, his deputy chief of staff for operations who oversaw all security at the White House, according to Hutchinson. She said that Meadows did not act on the information.

Police radio transmissions played by the Jan. 6th committee revealed that among the thousands of people attending the Stop the Steal rally before the attack on the Capitol, some were armed with AR-15s and glocks, including someone in a tree that Secret Service was aware of who had an AR-15.

Hutchinson testified that she had heard reports of D.C. police arresting people with firearms or ammunition on the night of Jan. 5 at a pro-Trump rally on Freedom Plaza.

Proud Boys and Oath Keepers: Hutchinson previously testified to hearing the words “Proud Boys” and “Oath Keepers” more often on the days leading up to Jan. 6. She testified to intelligence reports that warned of the potential for violence that week.

Some of the reports included listings for events like “Fight for Trump” with descriptions like: “We need to flood the Capitol Building and show America, and the senators and representatives inside voting that we won’t stand for election fraud!”

The White House continued to receive information including about extremist groups like the Proud Boys, who were planning these events for Jan. 6, Hutchinson said.

Capitol Police warned that Proud Boys and other groups were planning to arrive in Washington, D.C., on Jan. 6 and “unlike previous post-election protests, the targets of the pro-Trump supporters are not necessarily the counter-protesters as they were previously, but Congress itself if the target on the 6th,” according to reports shown by the committee.

Hutchinson’s conversations leading up to Jan. 6: In response to questions from Cheney about a conversation with Rudy Giuliani on Jan. 2, Hutchinson told the panel that was the first night she was scared as planning for the rally continued.

Giuliani, Hutchinson said, told her that on Jan. 6 the president and others would go to the Capitol. Hutchinson asked Meadows about the conversation and asked him about those plans.

“He didn’t look up from his phone and said something to the effect of ‘there’s a lot going on, Cass, but I don’t know, things might get real, real bad on Jan. 6,'” she recalled. “In the days before Jan. 2 I was apprehensive about the 6th … when hearing Rudy’s take on the 6th and Mark’s response, that was the first moment that I remember feeling scared and nervous about what could happen.”

In previously recorded video interviews, Hutchinson said that former Trump Director of Intelligence John Ratcliff didn’t believe that the administration should be attempting to overturn the election and disagreed with the White House’s handling of the post-election period.

Opening statement from Vice Chair Liz Cheney: The leading Republican on the Democrat-led panel introduced Cassidy Hutchinson as the principal aide of Meadows who worked in the West wing.

Hutchinson is expected to testify on firsthand observations of Trump and his advisors’ conduct on Jan. 6, and what they knew about the prospect of violence on that day. She will be questioned live and previous testimony will be seen through videos.

“The Select Committee has obtained new information dealing with what was going on in the White House on January 6th and in the days prior . . . specific, detailed information about what the former president and his top aides were doing and saying in those critical hours.”

“The truth won’t be buried,” he added.

A meeting before the hearing: Members of the Jan. 6 met in a sensitive compartmented information facility, according to two people familiar with the meeting, a secured House briefing room usually used for dealing with classified information that requires extra protection against leaks and eavesdropping technology.

Cassidy Hutchinson, the Mark Meadows aide who appeared in videotaped testimony before the Jan. 6 committee last week, is the panel’s surprise witness for Tuesday’s hearing, NPR has confirmed.

The committee announced Monday that it would hold a hearing Tuesday “to present recently obtained evidence and receive witness testimony.”

The hearing announcement was unexpected; the committee was on brief hiatus until the week of July 11.

This will be the sixth hearing for the Democrat-led committee, which has spent the last few weeks building a case around former President Donald Trump and his influence on the Jan. 6 insurrection.