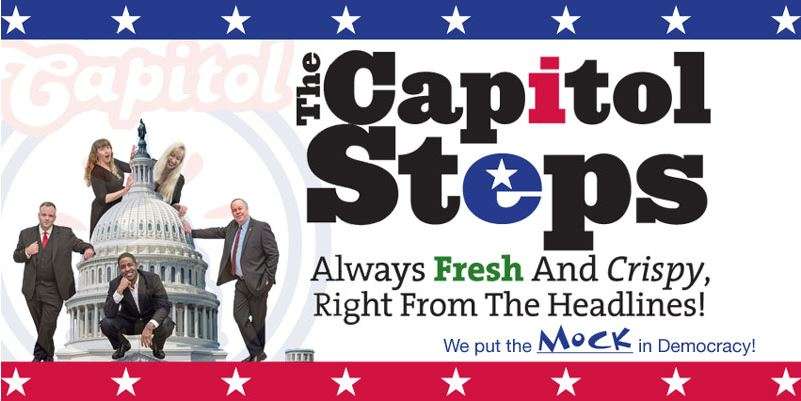 Elaina Newport is a founding writer, member and performer of the political-satire comedy group Capitol Steps. Since 1981, the show has used political events and scandals as material for its parody songs and skits, traveling around the country and performing for multiple presidents.

Newport stops by Intersection ahead of their visit to Orlando on Feb. 28 to discuss the troupe’s lasting success and ability to find comedy in shifting political times.

Newport was working as a staffer for Illinois Senator Charles Percy when the idea for Capitol Steps was born. She and a few fellow staffers, struggling to come up with entertainment for the annual Christmas party, decided to parody their own bosses.

Instead of taking offense, politicians thought the skits were hilarious and began requesting the staffers repeat the performance at different events.

“We thought we’d be fired or told to stop or both, but we never were,” Newport said.

“We were senate staffers and we thought, ‘Uh oh, this is gonna jeopardize our day jobs and some day this is gonna come back to haunt us,’” she said. “But the surprise over the years was that a lot of the politicians that we worked for kind of liked it, and they invited us to perform for them even if we had songs and skits about them. In fact, a lot of them wanted songs and skits about them.”

Each Capitol Steps performance features five performers and a pianist. Originally only made up of former Capitol Hill employees, the show now also features professional actors and singers.

The troupe draws its material from national headlines, which are sometimes stranger and more outlandish than the satire itself.

“It does make our jobs as writers very difficult and we have to adapt,” Newport said.

Among Newport’s favorite characters to play is House Speaker Nancy Pelosi. The show aims to remain bipartisan in its humor — a joke about Vice President Mike Pence will be followed by a jab at Democratic Sen. Chuck Schumer.

“We try to kind of get everybody, and even if the party in power is funnier we try to balance the show as much as we can,” Newport said.

Capitol Steps has been featured on NPR for many years, meaning the show gets a lot of “news junkies” in its audience, Newport said. She said she noticed a shift after the 2016 election with some audience members coming in feeling conflicted about laughing at jokes about the divisive political climate.

“The best comment that we would get after the election — somebody would come up to us and say, ‘I wasn’t sure I could laugh, but I did and I feel better,’” Newport said.

After 38 years of performing, Capitol Steps has gained a following for its clever satire. A list of presidents including Ronald Reagan, George H.W. Bush, Bill Clinton and George W. Bush, as well as members of Congress, have frequented performances over the years. Newport said the most negative reaction the show has received was from a New York politician who was upset he didn’t get a song or skit in the show.

“The worst thing you can do to a politician is ignore him or her,” she said.

The D.C.-based comedy troupe will perform at Trinity Preparatory School in Winter Park on Feb. 28. More information and tickets.