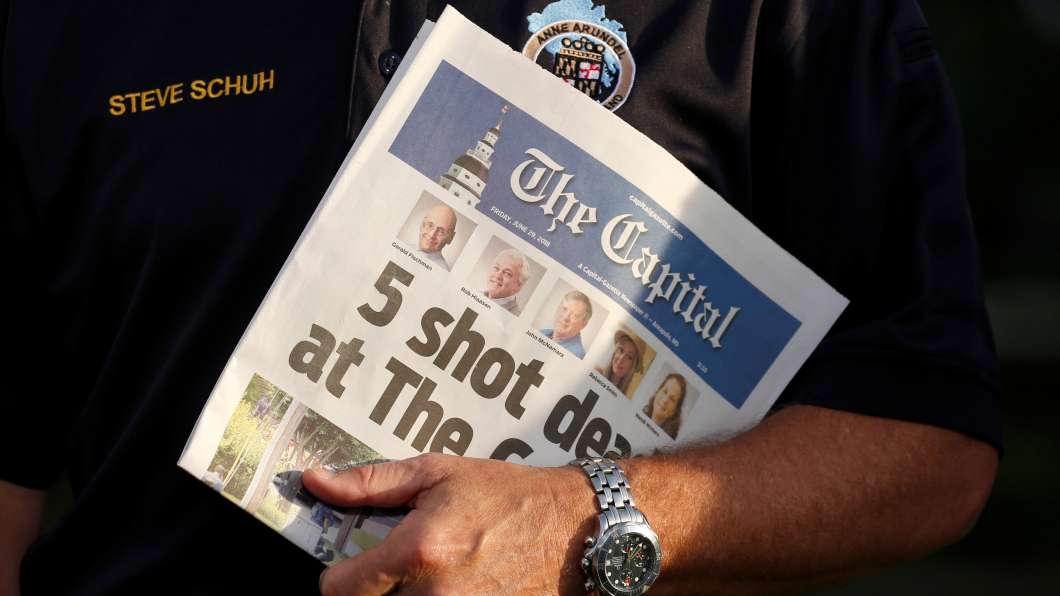 Staff of The Capital put out a newspaper on Friday, one day after a gunman killed five people in its offices at the Capital Gazette. Here, Steve Schuh, county executive of Anne Arundel County, Md., holds a copy of Friday's paper.
Image credit: Joshua Roberts

“Today we are speechless,” the opinion page of The Capital’s Friday edition reads, a sign that the paper’s staff is still reeling from five of their colleagues being shot and killed. Despite being attacked by a gunman on Thursday, the staff put out a newspaper, with powerful reporting on its own tragedy.

That opinion page — A9 — sits almost entirely empty, with a huge blank space where columns and editorials would normally be.

Beneath it, the editorial staff wrote, “Tomorrow this page will return to its steady purpose of offering our readers informed opinion about the world around them, that they might be better citizens.”

That declaration came as Cook and others reported on the latest news of the shooting and the devastating loss of life in the small newsroom. Cook’s message resonated with many who were following the story, including several journalists who work for other news outlets — who responded by offering to pitch in if they could help The Capital.

Capital Gazette journalists worked to report the story of what police say was a “targeted attack” on their place of work, informing the public of what they knew about a shooting that touched them all on deep personal and professional levels.

In addition to the tribute in the opinion section, the paper’s front page led with the photos of the five colleagues who were killed:

Before midnight, the newspaper also published focus pieces on each of those who were lost, drawing on reporters from its sister publication, The Baltimore Sun. It did so just eight hours after the shooting had turned The Capital’s newsroom into a chaotic crime scene.

“Gunman shot through the glass door to the office and opened fire on multiple employees,” reporter Phil Davis tweeted.

He later added, “There is nothing more terrifying than hearing multiple people get shot while you’re under your desk and then hear the gunman reload.”

The attack came on what was supposed to have been a normal news day — and, for many staff members, a recovery period after covering Maryland’s primary elections on Tuesday. Before the shooting, the big news Thursday was a planned event: Induction Day at the U.S. Naval Academy.

As news of the shooting erupted, staff members who weren’t at the office rushed to learn what had happened, and to report on it. Photojournalist Joshua McKerrow documented the scene as he arrived.

McKerrow and Cook continued to work from the scene as details emerged. So did another colleague, veteran reporter Pat Furgurson — who can be seen in photos from the police news conference, holding his phone out to record official updates on the damage sustained by the Capital Gazette newsroom.

Setting about their work, the three journalists used the back of Furgurson’s pickup truck as a makeshift desk, as The Capital reports.

The Maryland man who is suspected of carrying out the attack is in custody and has been charged with five counts of first-degree murder. The suspect, Jarrod Ramos, had harassed the paper’s staff over a long-running dispute, police say.

Early Friday, as Davis tweeted details about Ramos’ planned bail hearing, he wrote, “I can’t sleep, so I’ll do the only thing I can and report.”

Many of the messages from other staff members showed the same mix of journalistic commitment and personal loss.

After Hiaasen’s death was confirmed, Chase Cook said of the editor via Twitter, “He called me this morning asking about a headline clarification. He was an amazing editor who made me a better reporter.”

Of the paper running a Friday edition despite the attack, Cook wrote, “This was not possible without our colleagues and friends at The Baltimore Sun. Thank you all for your work.”

McKerrow extended the same gratitude — and last night, he wrote, “I want to thank the first responders for all their work today, and the many journalists who came to cover our tragedy with empathy and respect. I can’t talk about those we’ve lost yet. The loss is unimaginable.”