Canadian, Russian, American Back On Earth From Space Station 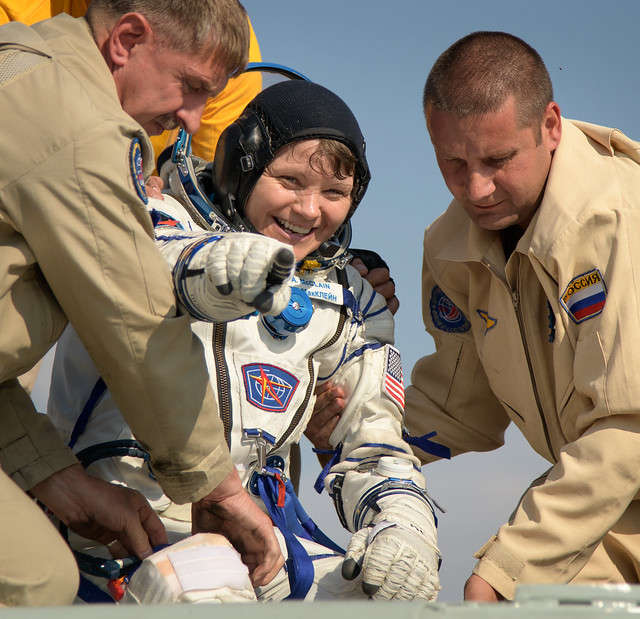 Expedition 59 NASA astronaut Anne McClain is helped out of the Soyuz MS-11 spacecraft just minutes after she, Canadian Space Agency astronaut David Saint-Jacques, and Roscosmos cosmonaut Oleg Kononenko, landed in a remote area near the town of Zhezkazgan, Kazakhstan on Tuesday, June 25, 2019 Kazakh time (June 24 Eastern time). McClain, Saint-Jacques, and Kononenko are returning after 204 days in space where they served as members of the Expedition 58 and 59 crews onboard the International Space Station. Photo Credit: (NASA/Bill Ingalls)

The Soyuz capsule with astronauts from Canada, Russia and the United States landed in the steppes of Kazakhstan at 8:47 a.m. (0247GMT), less than a minute ahead of the scheduled time, on Tuesday after a 3 ½ hour flight from the orbiting lab.

Two of the astronauts had completed their maiden flights: Anne McClain of the United States and David Saint-Jacques of Canada. The expedition commander Oleg Kononenko of Russia has ended his fourth space mission. All three spent 204 days in space.

The space veteran Kononenko who was the first one to have been extracted from the capsule looked visibly tired and pale. McClain and Saint-Jacques were more energetic and gave a thumbs-up to the recovery team who greeted the three with applause.

The astronauts were put on camping chairs in the sun just by the capsule for a respite and initial medical checks.

When asked by a reporter on site if he liked the weather Kononenko said he was “happy to see any kind of weather” after spending over 200 days in space.

The crew is expected to be taken to a local airport and fly to their home bases.