Can The U.S. Crowdsource Its Way Out Of A Mask Shortage? No, But It Still Helps 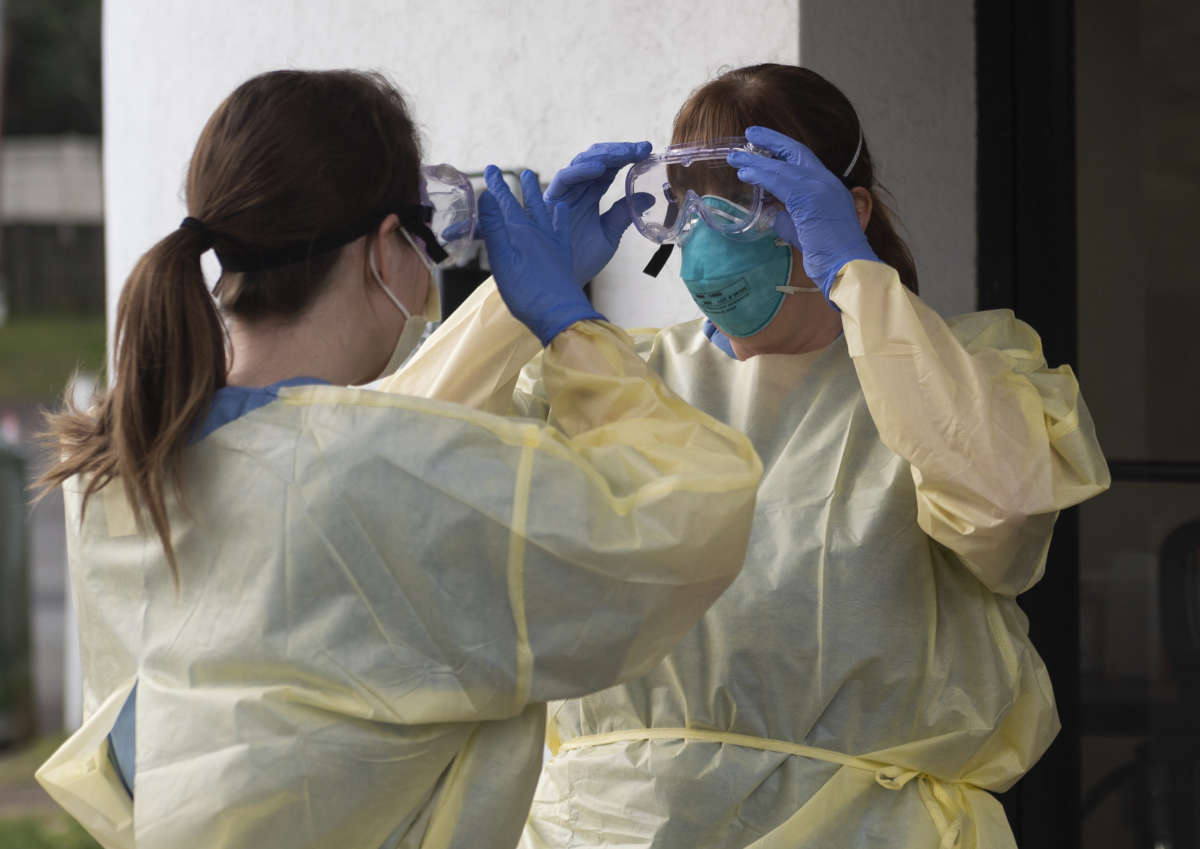 Health care workers from Virginia Hospital Center put on their personal protective equipment before people arrive at a drive through testing site for coronavirus in Arlington, Va., on March 20, 2020.
Image credit: Andrew Caballero-Reynolds

President Trump says key help is on the way from the strategic reserve and from private industry ramping up production, including big shipments from 3M.

“Through FEMA, the federal government is distributing more than 8 million N95 respirators, 14 million surgical masks and many, many millions more under order — and they’ll be arriving soon,” Trump said Tuesday at a White House coronavirus briefing.

Given the overall crisis, scores of citizen-led donation groups are popping up across the country, including GetusPPE.org, DonatePPE.org, Mask Match and one to move gear from labs to hospitals called PPE Link. Then there’s also a group of volunteers called Mask Crusaders who’ve set up ad hoc chapters in New York, Chicago, L.A., Seattle and elsewhere. The hastag #GetMePPE continues to trend across social media.

They’re asking contractors, nail salon owners, museums — anyone — to search their closets and storage bins for disposable nitrile gloves as well as masks.

Brooklyn-based sculptor Tom Beale wanted to donate 50 surgical masks and some N95s in New York City where hospitals are close to being overwhelmed. He contacted Mask Crusaders. Soon, a nurse at a local hospital got in touch. She told him her unit was down to their last mask.

“I brought them to Woodhull Hospital and a midwife came down. She was thrilled to receive them,” Beale says.

The next day an artist friend gave Beale four N95s. Just four. He went back to the Mask Crusaders site and a New York nurse quickly claimed them for her hospital.

“I mean, it was palpable. You know, she drove to me to pick up four masks. So that tells you something about what they’re dealing with,” he says.

Shabd Simon-Alexander, a community organizer, helped launch Mask Crusaders. She says the volunteer response to this makeshift effort — and many others like it — is heartening. But she says it also underscores fundamental failures of federal and state government policy, planning and priorities.

“I’m super inspired by the way that people are stepping up to help each other. And I love to see, like the beauty in humanity, but in reality, it shouldn’t fall on us,” Simon-Alexander says. “We can’t mutual aid our way out of systemic failure. And it’s not sustainable. It’s just a stopgap.”

Getting the masks from storage to the workers in need can be challenge. Beale, for example, called the New York State COVID-19 hotline for citizen donations. Nothing happened. He sent off an email to the address given. Still nothing.

“Didn’t get a response, actually, still to date. That was surprising to me because I didn’t want to just show up at a hospital because, you know, I just know they’re just dealing with so much at this moment,” he says.

And the volunteer effort is very unlikely to fill the need. The scale of supplies that may be needed in coming months is daunting, especially in the hardest hit states.

California Gov. Gavin Newsom says his state is radically ramping up procurement of safety gear from across the country and the globe.

“One billion gloves to procure, 500 million N95 masks, some 200 million shields — you get the picture,” Newsom told reporters this week.

Newsom says now is the time for governors to coordinate closely, noting that states are now competing with each other for the same limited medical supplies. That could hurt smaller states with smaller budgets. Newsom says the nation must “begin the process of centralizing the procurement, it is incumbent upon us to address this issue in a much more systemic way.”

Many people are sewing homemade masks for personal and hospital use. They’re sharing tips, tutorials and videos across social media. But the CDC warns that those should be used only as a last resort and “and are not considered PPE, since their capability to protect [healthcare practitioners] is unknown.”

Simon-Alexander, who helped launch Mask Crusaders, hopes that as these ad-hoc efforts grow, maybe the definition of those who need masks also grows.

“There are tons of people doing the work of keeping our city and our society afloat right now so that we can be safe,” she says. “That includes janitors, garbage pickup and all of the grocery store clerks.”

In the meantime, the promised help can’t come fast enough for many nurses and doctors.

Maria Louviaux, a clinical nurse at UC Irvine Medical Center in Orange County, Calif., says she and her colleagues are being told to severely limit the use of masks to conserve, and if they’re not soiled or damaged — to reuse them.

A spokesman for UCI Health, John Murray, says conserving PPE is prudent planning in case things get worse. “Given uncertainty about future availability of these supplies, UCI Health and medical centers across the University of California Health System have adopted safe conservation protocols consistent with CDC and OSHA guidance for appropriate PPE use,” Murray wrote in an email. The FDA is also encouraging hospitals to conserve masks and gowns.

U.S. Surgeon General Dr. Jerome Adams warned on CBS earlier this week that Americans should brace for the possibility of shortages of personal protective equipment for weeks to come. He called on Americans to postpone all elective surgeries.

“We need to make sure the supplies are getting to New York, to California, to Washington,” Adams says, adding, “we know that there are going to be shortages in some areas.”