Can Biden Join FDR And LBJ In The Democratic Party’s Pantheon? 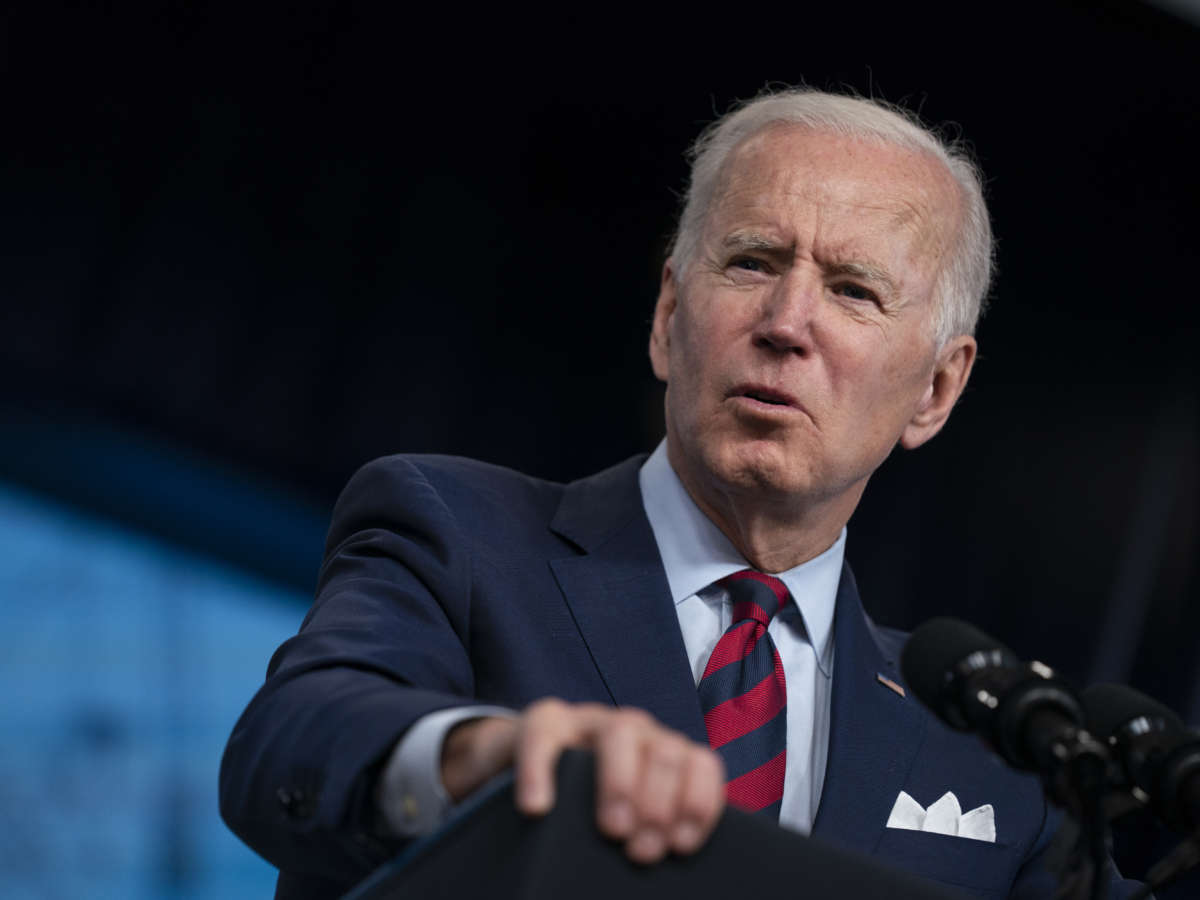 President Biden promotes his American Jobs Plan during an appearance in the South Court Auditorium on the White House campus on April 7. The sheer scale of his early agenda has drawn comparisons to the achievements of FDR and LBJ.
Image credit: Evan Vucci

As we approach President Biden’s 100th day in office at the end of this month, some observers are flattering him with comparisons to two legendary Democratic presidents of the 20th century — Franklin D. Roosevelt and Lyndon B. Johnson.

Those names reportedly came up when historian Jon Meacham convened a group of his colleagues at the White House in early March for a private session with Biden. And since then, the aptness of comparing this new president to such transformative figures of the past has become a matter of some debate in Washington and beyond.

The sheer scale of Biden’s spending and change agenda finds its analog only in the early achievements of FDR and LBJ. But which of those administrations offers the better insight into what is happening now, or what happens next?

Roosevelt, in just his first hundred days in 1933, reversed the tide of U.S. public policy after a dozen years of Republican presidents known for their aggressively pro-business views and their defense of such social restrictions as Prohibition.

Many of the most enduring changes FDR wrought did not come until later. The flurry of reforms and programs launched in his earliest months restructured the banking system and put millions to work. It also restored faith in government action and expanded the role of the federal government in the economy and in citizens’ everyday lives.

Years later, when a visitor to Washington asked to be shown the monument to FDR, he would be told simply to look around at the official government buildings visible in all directions.

Is Biden reaching for the mantle of FDR, or having it thrust upon him?

The new president has already signed into law a $1.9 trillion pandemic relief package, the American Rescue Plan, which includes an array of health programs, but also a far-reaching assault on child poverty that exceeds anything since the 1960s.

Moreover, Biden has proposed an even larger $2 trillion infrastructure package — the American Jobs Plan — that would not only rebuild roads and bridges, but build half a million charging stations for electric vehicles, while investing vertiginous sums of money in research and development to modernize manufacturing and retrain workers and to expand home health care, improve broadband and the electrical grid.

“Even if you adjust for inflation and use constant dollars, there is far more money in what Biden is doing than in the programs Roosevelt put in place in his first hundred days,” says journalist and historian Jonathan Alter, author of the book The Defining Moment: FDR’s Hundred Days and the Triumph of Hope.

These mammoth bills do more than move mountains of money. They are also attempting to re-engineer key aspects of the system. FDR altered the workings of capital and labor in ways that are still very much with us today. Biden may be trying to do some of the same, but the new president’s work has just begun — and his changes have yet to face the test of time.

“It’s difficult for me to conceive that they will be transformational to the degree that the New Deal’s undertakings proved to be,” Stanford historian David M. Kennedy wrote in an email earlier this month.

Kennedy, who won the Pulitzer Prize in 2000 for his book Freedom from Fear: The American People in Depression and War 1929-1945, cites “just a handful of examples,” including Social Security, banking and labor reforms, housing policies and the Securities and Exchange Commission, which, taken together “materially changed the terms of life for every generation since.”

Kennedy also cited two “domains where transformational change is needed.” Climate is one, and inequality is the other. “If the Biden efforts effect change there, then comparison with the New Deal may well be appropriate.”

The other president whose name is being bandied about, Lyndon B. Johnson, was often compared to FDR in his own heyday. As a Texas congressman, Johnson was a loyal supporter of the New Deal in the 1930s. Later, he rose to Senate Majority Leader before becoming vice president to President John F. Kennedy.

LBJ was able to use the emotional surge that followed Kennedy’s assassination in 1963 to push through the Civil Rights Act of 1964. That fall, he not only won a term in his own right but did it with more than 60% of the popular vote, carrying in the biggest Democratic majorities in Congress since, well, since FDR.

That momentum and those majorities helped LBJ achieve an annus mirabilis on Capitol Hill, featuring 70 votes to choke off a filibuster of the Voting Rights Act and then 77 votes on final passage. There were big majorities as well for the creation of Medicare, Medicaid and a host of other “Great Society” programs inspired in part by FDR’s own. There was also a landmark immigration bill that ended quotas by national origin.

And that was not all. Not even close.

Earlier this month, Mark Updegrove, the president of the LBJ Foundation in Austin, Texas, showed a visitor via Zoom the glass cabinet at the LBJ Presidential Library and Museum that holds 50 fountain pens. Each was used on a separate piece of major legislation that was signed into law by Johnson — just in 1965 alone.

Even with the bar raised that high, Updegrove believes LBJ is a better model for Biden than FDR.

“As a candidate, Biden preferred to talk about the New Deal,” Updegrove says. “But if you look at what Biden might be able to achieve, it equates more to LBJ.”

Updegrove has written one book called Indomitable Will: LBJ in the Presidency and another called Trial by Fire: Eight Presidents Who Took Office in Times of Crisis. He says Biden can emulate Johnson’s feats by using crises that “bubble up” as an opportunity to address a wider range of challenges and deal with their root causes.

FDR entered office in the midst of the worst Depression in U.S. history. LBJ did not have that sort of dire crisis at his doorstep, but like FDR he managed to maneuver his troops and sequence his moves so that each achievement made the next one more doable.

Biden’s situation on Inauguration Day was something between FDR’s and LBJ’s. He took the oath with the COVID pandemic raging, the economy still reeling and the national mood dominated by grievances. The former president had refused to concede defeat — and much of the nation stood with him. Millions were shocked by the invasion of the Capitol on Jan. 6, but millions had also been appalled by the street protests against police violence the previous summer. And, as a whole, the nation was sick of the constraints and disruptions caused by the virus and the fear of infection.

Stepping in as the national leader at such a dramatic time, Biden has had the chance to at least propose a program for the pandemic, the economy, the society as a whole and the people’s relationship to their government that has the potential to be as transformative as his illustrious predecessors.

But the irony of Biden’s success in dealing with the pandemic, to date, is that doing so raises hope in itself. The economy had begun roaring back well before passage of the relief bill, with the Dow Jones Industrial Average and the S&P 500 hitting record highs early this month. As the suffering recedes and with it the sense of crisis, Biden may find it more difficult to move Congress the way FDR or LBJ did.

Alter notes that FDR was known for his charm. “People just liked him and wanted to be around him.”

LBJ was often noted for his ability to cajole, harangue and eventually overwhelm anyone who stood in his way. Biden is more easily pictured smiling like FDR than glowering like LBJ. He has probably had as many good relationships with Republicans in Congress as any powerful Democrat has had in the last two or three decades.

But Biden will need more than charm or cogent arguments to match what his storied predecessors did on Capitol Hill. He has nominal majorities supporting him, but Democrats only hold the House by a handful of votes and the Senate is Democratic only with the tie-breaking vote of Vice President Kamala Harris.

Historians are quick to point out that the Democrats in the 1930s and 1960s were essentially two parties, one of which was from the South. The Democrats’ dominance in Dixie ended in the 1990s, but when it existed it posed problems of its own. Senior incumbents from the South largely ran the Senate, and they often held the key committee chairmanships in both chambers.

“The House Rules chairman could keep a bill from coming to the floor,” Alter notes. “And there was “Cotton Ed” Smith from South Carolina running the House Agriculture Committee and giving Roosevelt fits on farm policy.”

Biden can look to allies in Speaker Nancy Pelosi, D-Calif., and Senate Majority Leader Charles Schumer, D-N.Y., who generally lead an unusually unified Democratic contingent in each chamber. But the margin for error is essentially zero. Prospects for help from crossover Republicans are slim on major bills. That is why progressive groups have been calling on Democrats in the Senate to end the filibuster, which requires 60 votes to proceed on legislation.

But contemporary American politics pose other problems for a president that neither FDR or LBJ had to face. One is what Updegrove calls “the fragmentation of the media.” In past eras, a few national radio and TV networks enabled a president to speak to the nation as a whole and count on much of it listening or watching.

The fireside chats that Roosevelt commenced the month he was inaugurated were a vital element in selling his program. Both FDR and LBJ generally had good coverage on the news pages of the largest daily newspapers and weekly magazines, even when some publishers and their editorial pages were openly hostile to their policies.

Today’s media still include the legacy publishing and broadcasting operations, but the political conversation is more often driven by cable TV, Internet newsletters and social media. Audiences turn to sources of information they find simpatico and are not exposed to competing points of view. A presidential message may be trumpeted in some news quarters, vilified in others and ignored by more than a few.

So while FDR could get on the radio and speak to “my friends,” and LBJ could be on TV in prime time addressing “my fellow Americans,” the most effective media politician in recent years, Donald Trump, depended on his Twitter feed (now closed) and the cable-TV coverage of his live rallies.

To this point, Biden has not been able to find a comparable conduit to the audiences he will need if he is going to sell his agenda, enact his legislation and find a way to unite a bitterly divided nation. If he is able to accomplish that, it may very well secure permanent status in the FDR-LBJ weight class.