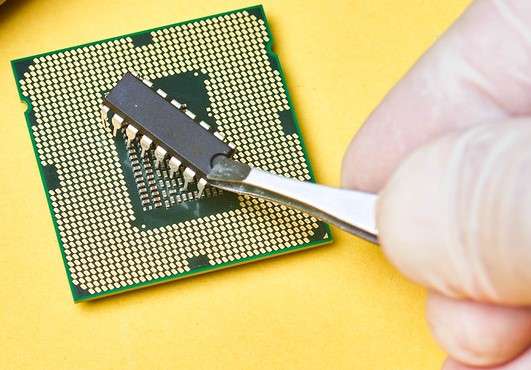 Osceola County recently received more than $50 million toward the development of semiconductors. That money was awarded as part of the federal government’s Build Back Better Challenge. Tim Giuliani, CEO of the Orlando Economic Partnership, said that money will allow  expansion of a semiconductor manufacturing hub —  NeoCity.

Neo City is a 500-acre technology district in Osceola County that also serves as a hub for Central Florida’s semiconductor manufacturing industry.

It consists of a 109,000 square-foot office building, a stem-focused high school — NeoCity Academy, and a fab lab.

The fab lab, or fabrication laboratory, is a clean room and Tim Giuliani, CEO of OEP, said you wouldn’t be very excited if you walked inside.

“Everyone’s wearing complete gowns, and goggles, etc, because the air has to be of a certain quality. It has to be a very controlled environment,” he explained. “There’s a lot of really expensive tools. So you almost see an assembly line of sorts, with people inside managing the process, overseeing the tools, recalibrating, and sort of that whole production cycle.”

Giuliani said this district has been a long-term plan by the county to diversify the economy and create more tech opportunities in the region.

Before receiving the $50 million from the Build Back Better Challenge, Giuliani said Osceola County has already put in over $200 million into the project. “The county has led the investment. UCF has been a partner (and) the state has made some investments,” he said. “But largely at this point, it’s local dollars, although now we’re trying to match that with federal dollars.”

President Biden signed the CHIPS and Science Act into law in August in an effort to boost semiconductor manufacturing in the U.S. Giuliani said that will help build more fab labs in the country.

“There’s approximately a 25% cost differential of opening a Fab Lab in, say, China and the US,” he said. “So in order for those companies to produce in the US, the federal government stepping in to essentially account for that 25% price makes a difference so that we can onshore chip production.”

Making chips in the U.S. rather than outsourcing production to another country has a range of benefits for national security and local residents. Giuliani said, “having a much more reliable, robust domestic supply chain in semiconductors is a big piece of lowering costs for all of these electronic items.”

In Neo City, SkyWater technology is producing chips locally. Giuliani said they’re only U.S. owned semiconductor foundry which means they make chips for other companies. He said, “it’s not like Intel that makes their own chips. They make chips for others. So that could be Department of Defense, it could be all sorts of these national security concerns.”

Having quicker access to chips can also be beneficial to local businesses, like Massey Services Pest Control. Giuliani said they use sensors to detect roaches. “It picks up the smell, it’s kind of interesting, something you wouldn’t think is really high tech,” he said.

The money from the Build Back Better Challenge will go towards six projects in NeoCity, including Upskill Osceola.

Upskill Osceola will expand a skills-based workforce development platform that develops a talent pipeline by aligning education and training with the specific skills demanded by the semiconductor industry. Giuliani said that will fuel more collaboration across regions and industries.

“How do you get the space companies to talk with the higher ed institutions to talk with our local high schools, to talk with our employer, the other employers to make sure that there’s synergy,” he said. “This Fab Lab benefits people here with more jobs than just being one spoke on the wheel. We want to be multiple spokes on the wheel and take full advantage of having this capability in Central Florida.”