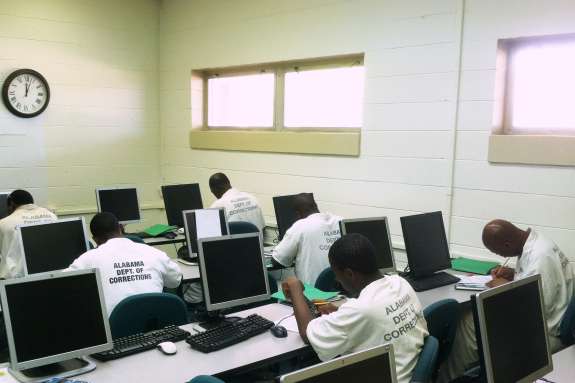 In a small classroom in Alabama’s Julia Tutwiler Prison for Women, a dozen women sit at long gray tables. They all wear the same coarse white jumpsuits as a projector shows tips on “responding to anger” and “developing a positive self-concept.”

This prompts 34-year-old Tamara Kirkwood to reflect on her past.

“You’ve got this mentality,” Kirkwood says, “and you don’t know how to change that way of thinking. You don’t know how to get around that. All you know is: ‘I don’t have, and I need, and this is what’s gonna have to be done.’ And after so long, you think that’s the way life is.”

Kirkwood is not alone. The United States locks up people at a higher rate than anywhere else in the world, and some of the country’s most overcrowded prisons are in Alabama. Tutwiler Prison is running at almost double capacity and has been under federal investigation for widespread sex abuse by prison guards.

But the inmates at Tutwiler Prison do have access to a unique state-funded education program that offers GEDs and other skills that inmates need after release. The problem is, this program, which would theoretically ease overcrowding, is threatened by budget cuts.

Kirkwood’s in for drug charges, but she’s taking the new life skills course offered by J.F. Ingram State Technical College. J.F. Ingram provides correctional educational programs and is part of the Alabama Community College System. For decades, it has offered inmates education meant to ease their transitions back into the outside world and reduce recidivism, and recently, it launched a new life skills program. Hank Dasinger, president of J.F. Ingram, initiated the program.

“As I began to think about the people that I knew — including relatives — that have gone sideways with the law, what got them in trouble was not their ability or inability to do a job,” Dasinger says. “What got them into a jam was their inability to manage their life.”

Dasinger is a former Air Force marksmanship trainer with degrees in education and psychology. He took over this seven-campus prison college two years ago.

One of the students is 43-year-old Robin Myers, who is in Tutwiler Prison on felony DUIs.

“Had I had someone teaching me the things that this program is teaching me 20 years ago, we would not be speaking at this moment,” Myers says.

She says she wishes the life skills classes were required for inmates.

“These classes take us step-by-step through thought processes — how we live,” Myers says. “So that we can identify the steps where we’re going wrong.”

The problem is there are only two people teaching this course at Tutwiler. The prison is built to house 400 inmates, although it now holds roughly 700. Instead of getting more money, though, two years ago J.F. Ingram saw its budget slashed more than 12 percent.

“And this year I’m facing another twenty-something-thousand-dollar cut. It makes a huge difference,” Dasinger says. “In light of all of the evidence about the effectiveness of correctional education, how in the world do we cut the program that stands the best chance of getting people out of the overcrowded prison and into a situation where they won’t come back?”

Republican State Sen. Cam Ward has become a leader on the issue of prison reform in Alabama.

“It’s very hard to justify an education program for prisoners, when K through 12 doesn’t have enough supplies and materials for their kids to go school,” Ward says.

While he points out the current budget realities, he also acknowledges the benefits of prison education.

“Studies have shown that inmates who get involved in the educational component, like J.F. Ingram offers, they are 43 percent less likely to come back into the system again,” Ward says. “That’s astounding.”

There’s no hard data on how much J.F. Ingram’s courses reduce recidivism, but a national study by the Rand Corporation concludes prison education in general is dramatically effective. Says lead author Lois Davis, “It’s a relatively low-cost program that has a huge return in terms of the cost savings.”

Ballooning incarceration costs may persuade Alabama’s conservative, tough-on-crime politicians to soften up a bit. Some are now talking about sentencing reform and about being “smart on crime.”

That gives J.F. Ingram President Hank Dasinger some hope: “I think we’re at a crossroads, and I think the nation is going to watch what we do, and are we going to be the Alabama of old or are we going to really open ourselves up to new ways of thinking about a problem?”

Convicted burglar Timothy Brown is thinking about a future outside. He’s studying horticulture at another J.F. Ingram campus. Its low brick buildings look like any rural community college, except for the razor wire. He’s got a life sentence, but he’s hoping for parole.

“I fell in love with organic gardening,” Brown says. “And that’s the medium I want to try when I get out.”