BTS Spoke At The UNGA. And That’s Not The Only Surprise At The U.N. Event 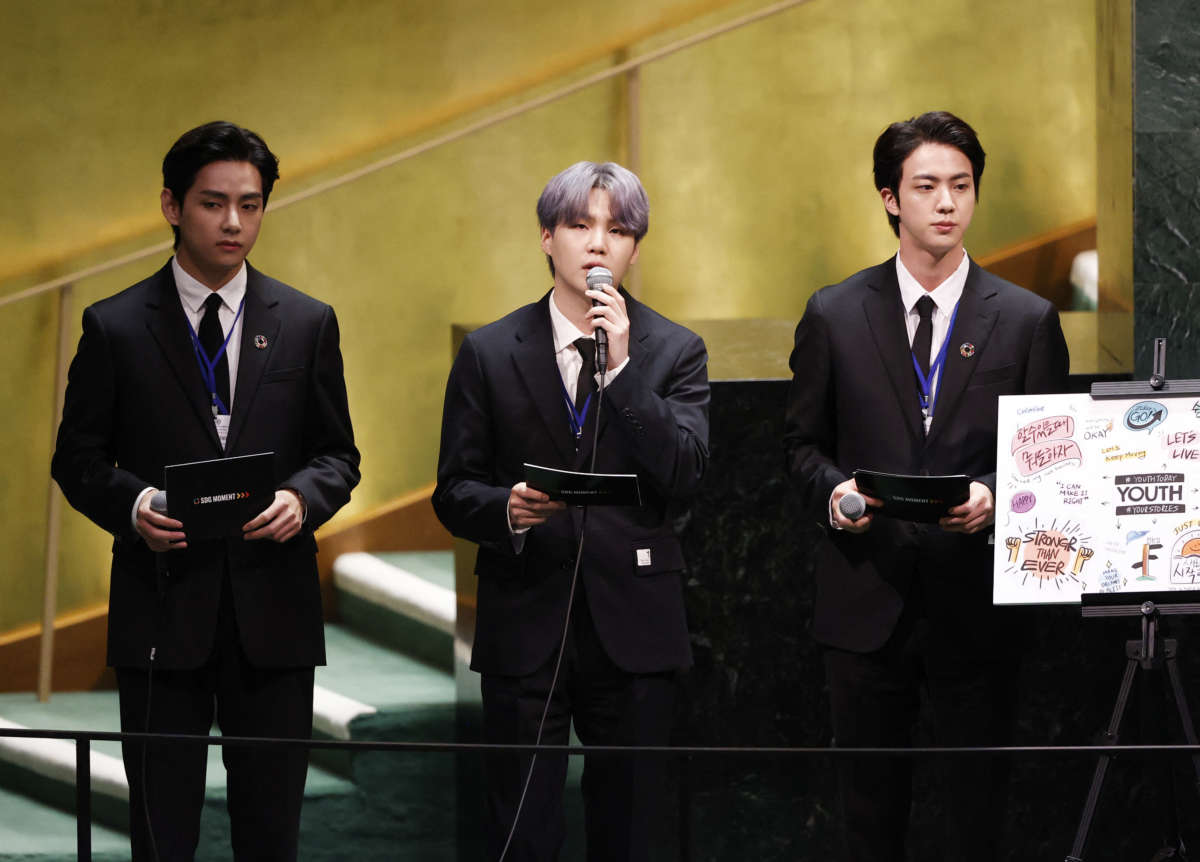 BTS sang (on a video viewed by more than 1 million). And they spoke. Left to right: Taehyung/V, Suga and Jin of the South Korean boy band at the launch of the U.N. General Assembly's 76th session on Sept. 20.
Image credit: John Angelillo

Here’s a tweet you wouldn’t expect to see at the 76th annual session of the United Nations General Assembly:

After a virtual assembly in 2020, the U.N. is holding this year’s event as a hybrid with in-person and online participation. On Monday, the seven members of the world’s hottest supergroup strode on stage to kick off the high-level gathering.

More than 1 million people watched online as the boy band from South Korea screened their video performance (of “Permission to Dance,” shot on the grounds of the U.N.) and delivered a live speech about climate change, digital community, vaccines and the power of youth to change the future.

“Rather than calling this corona generation a ‘lost generation,’ the term ‘welcome generation’ is more suitable. We will be a generation that welcomes change,” said group member Jin.

This is BTS’s third – and most prominent – appearance at a U.N. General Assembly. And it grabbed headlines around the world.

But the week is just getting started – and there will be other unexpected moments as global leaders discuss the world’s most pressing issues, including the pandemic, of course, but also climate change, poverty and global insecurity.

Besides BTS, here are seven other surprising things happening at UNGA 2021:

1. Need a 14-second primer on the General Assembly? Look no further than…TikTok?

👉 As the 76th #UNGA gets underway, check out our latest video to learn more about the UN General Assembly! https://t.co/E6fmHYwo1d pic.twitter.com/JNzhjDBh9k

The U.N. has hopped on a viral trend of making short, munchable videos. While a young woman … er … gyrates, questions about the General Assembly flash on the screen. For example, what is it? (In a nutshell: the main policy-making body of the U.N.) And who’s part of it? (All 193 “member states”). The video has nearly 12,000 views on TikTok and more than 68,000 likes on Instagram. But many of the people who commented on the post aren’t sure TikTok befits the world’s largest international organization. Some asked if the U.N.’s account was hacked. And one skeptic tweeted: “Ohhh noo cmonn!”

2. There’s a huge art installation that will vanish within weeks.

The French graffiti artist #Saype has inaugurated with @antonioguterres his giant eco-painting “World In Progress II” in the park of the @UN headquarters in #NewYork. The artwork sponsored by Switzerland describes two children building the 🌍 of tomorrow. Breathtaking!
🇲🇫🇨🇭❤🇺🇳 pic.twitter.com/zwxC2A8F8v

Swiss artist Guillaume Legros, who goes by “Saype” (short for “Say Peace”) has turned the U.N. Headquarter’s north lawn into an enormous painting called “World in Progress II.” Saype painted it directly on the grass, spraying a biodegradable paint that he developed himself. The piece depicts two children building an ideal future out of origami and is a follow-up to another lawn painting the artist revealed in Geneva last year. Last year’s painting has long disappeared, as will this new one. As the grass grows, the art will gradually fade to green.

3. There’s outreach to other species.

Another art installation showcased at UNGA, called Interspecies Assembly, aims to “foster friendly relationships among species” for a more sustainable future. The installation consists of sculptures in Central Park and a film projected onto the U.N. Headquarters that invites the “first non-human delegation” to the U.N. No word on which animal will be first in line.

4. A COVID skeptic who vowed to defy the vaccination requirement for the gathering delivers Tuesday’s opening speech.

President Jair Bolsonaro of Brazil is the first head of state to address his peers this year – a role that is considered important for setting the tone for the rest of the week. He might seem an odd choice because he has been a vocal skeptic of the seriousness of COVID-19 and the importance of vaccines, and his political future is in limbo due to his mismanagement of the pandemic. Bolsonaro claims he has not been vaccinated and vowed to ignore New York’s vaccination rules, which require delegates to show proof of vaccination if they plan to eat indoors or enter the General Assembly hall. U.N. officials say they do not have the ability to enforce the mandate and will operate on an “honor system.”

And why did Bolsonaro give the opening speech? Because according to U.N. protocol officials, the head of Brazil has done so since the mid-1950s, when no other head of state was willing to do the honors. Quite simply, it’s tradition.

A pink, yellow and blue bus outside the U.N. is offering free COVID-19 tests and Johnson & Johnson vaccines to UNGA attendees all week from 7 a.m. to 11 p.m. According to the city’s Test & Trace Corps, the mobile clinic provided more than 80 tests and six vaccinations by Monday afternoon. Unfortunately, representatives of a number of lower resource countries in Africa and Asia, where vaccines are in short supply, did not attend the General Assembly in person.

6. The first global summit on sustainable energy in 40 years will take place.

Climate change is a major topic at this General Assembly in the wake of a U.N. report issued on September 17, warning that the world is on a “catastrophic” path to warming. Among those discussions is UNGA’s first global meeting on renewable energy since 1981. The summit on Friday is an opportunity for governments, private sector leaders and civil society to make historic commitments that will help the world provide clean, affordable energy for all by 2030 and net-zero emissions by 2050. The meeting will be preceded by a Security Council debate on Thursday that will examine the link between climate disasters and increasing conflict and instability around the world.

7. The first ever U.N. meeting on overhauling the global food system will take place.

The many steps in getting food from the ground to our plates is “one of the main reasons” we are destroying our planet, according to U.N. Secretary-General Antonio Guterres. What’s more, roughly a third of all food produced each year is lost or wasted – about 2.9 trillion pounds — while nearly 690 million people are undernourished. Something’s definitely not right.

That’s why UNGA this year is hosting the first U.N. Food Systems Summit. The goal is to design a new system that will eradicate global hunger and protect the planet. Already, innovators have proposed thousands of potential solutions that they will have the opportunity to present to governments and other funders. How about setting up women-owned farming cooperatives that provide training and technology to close the agricultural gender gap? Or turning invasive sea urchins into fertilizer? If all goes as planned, we could be living in a new world of food by 2030.

Joanne Lu is a freelance journalist who covers global poverty and inequity. Her work has appeared in The Guardian and on Humanosphere, Global Washington and War Is Boring. Follow her on Twitter: @joannelu.