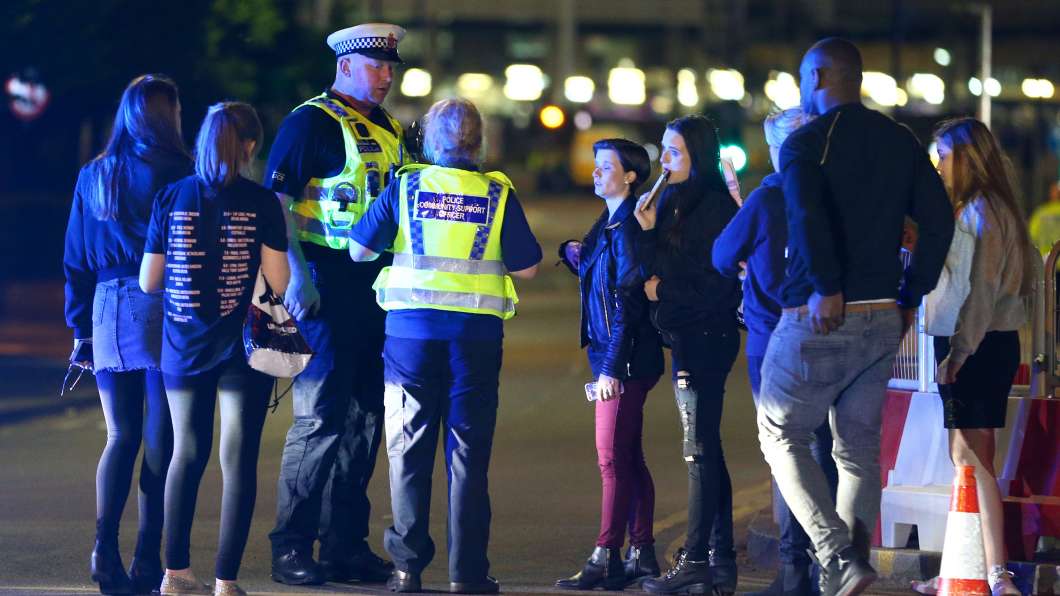 Police and fans outside the Manchester Arena on Monday, following reports of an explosion after Ariana Grande had performed.
Image credit: Dave Thompson

Police in Manchester, England, confirm 22 people dead at Manchester Arena following an explosion after a concert by Ariana Grande. Nearly 60 people have been injured.

Authorities say they believe one man detonated an improvised explosive device, and was killed in the explosion. Chief Constable Ian Hopkins of the Greater Manchester Police said in a news conference,

“We have been treating this as a terrorist incident and we believe, at this stage, the attack last night was conducted by one man. The priority is to establish whether he was acting alone or as part of a network.

“The attacker, I can confirm, died at the arena. We believe the attacker was carrying an improvised explosive device which he detonated causing this atrocity.”

Hopkins said police are working with national counterterrorism experts to investigate the attack.

Prime Minister Theresa May will convene an emergency Cabinet meeting Tuesday. She released a statement saying, “We are working to establish the full details of what is being treated by the police as an appalling terrorist attack. All our thoughts are with the victims and the families of those who have been affected.”

President Donald Trump, speaking after a meeting with Palestinian leader Mahmoud Abbas in Bethlehem, offered prayers for the people of Manchester, and said “we stand in absolute solidarity with the people of the United Kingdom.” The President lamented, “so many young beautiful innocent people living and enjoying their live, murdered by evil losers in life.”

Ariana Grande tweeted: “broken. from the bottom of my heart, i am so so sorry. i don’t have words.”

Friends and relatives of the audience members who hadn’t been heard from have posted messages on social media asking for word of their loved ones. Police have publicized a hotline number for families to call if they can’t reach someone who was there.

Earlier, the police said they conducted a “precautionary controlled explosion,” and the item they had been concerned about turned out to be abandoned clothing and not a suspicious item.

The management of the Manchester Arena issued a statement, saying the incident happened outside the facility.

White House Press Secretary Sean Spicer tweeted that the President is being briefed on the incident.

The U.S. Department of Homeland Security said in a statement that it is closely monitoring the situation in Manchester and that it has “no information to indicate a specific credible threat involving music venues in the United States.”

“However, the public may experience increased security in and around public places and events as officials take additional precautions,” the statement said.

The BBC reports witnesses heard an explosion, which was followed by a chaotic scene with audience members running for the exits. One tweet captured the sound of the blast:

Reuters reports that emergency services are responding to the reports of “a serious incident.” Greater Manchester Police are advising people to “avoid the area.”

One witness, Josh Elliott, told the BBC Radio 5 Live that “A bang went off and everyone stopped and screamed. … We basically hit the deck,” he said. “It was bedlam … it was horrific. We got up when we thought it was safe and got out as quickly as possible. People were just crying and in tears. … Police cars were everywhere.”

Local reactions to the bombing are coming in. Orlando Representative Carlos Guillermo Smith said Orlando stands with Manchester, urging the city to stand together and quote “love one another.”

Orlando Mayor Buddy Dyer says he’s saddened to read about the bombing, and that Orlando stands in solidarity with Manchester.

Saddened to read about the tragedy at the concert in Manchester. Orlando stands in solidarity with the people of the UK.

Congresswoman Val Demings says she is praying for Manchester today, calling it quote “another cowardly attack against innocent people.”

Standing with and praying for Manchester today. Another cowardly attack against innocent people.

Florida Governor Rick Scott says he is also praying for the safety and security of law enforcement and first responders.

Also praying for the safety and security of Manchester law enforcement and first responders during this unimaginably challenging time.

This is a developing story. Some things that get reported by the media will later turn out to be wrong. We will focus on reports from police officials and other authorities, credible news outlets and reporters who are at the scene. We will update as the situation develops. Abe Aboraya contributed to this report