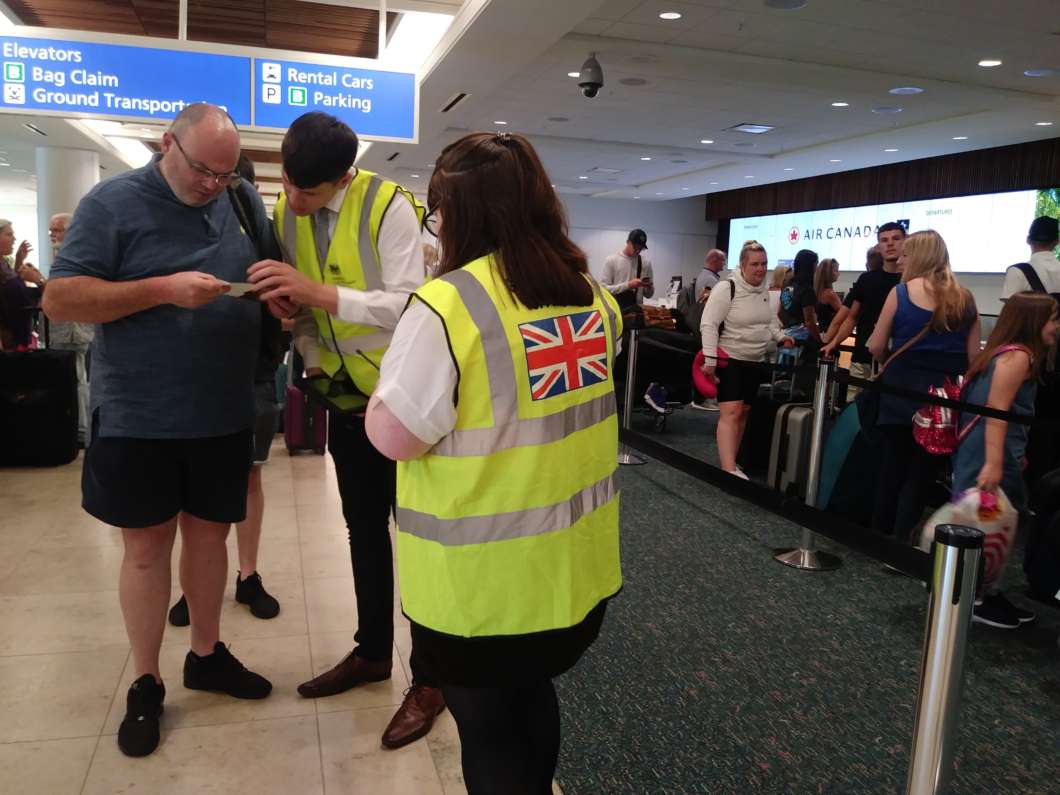 British consulate staff members assist a passenger near a line up of travelers with rerouted flights back to the UK. Photo: Melissa Woodford/WMFE

British passengers stranded in Central Florida after the collapse of Thomas Cook tour company and airline are being re-booked on charter flights out of Orlando.

Charter flights operated by Virgin Atlantic and Atlas Air were scheduled to depart for Manchester and Glasgow Monday afternoon.

Orlando International Airport spokesperson Carolyn Fennell said British consulate staff are at the airport to make sure passengers can get on a flight home.

“Because this is a softer season of travel with the children going back to school in the UK it is possible that passengers can be re-booked, some of them on the current flights that are scheduled to go to the United Kingdom,” said Fennell.

She said Thomas Cook operated three flights out of the airport per day which means thousands of British citizens will need to find another way to get back home over the next two weeks. Repatriation flights are set to continue through October 6th.

The airline does not have a staffed counter at the airport, but slips of paper directing passengers to flights and hotel deals were laid out on the counter.

Nancy Jack, traveling with four people, was heading back to Glasgow, Scotland. She was redirected to another flight operated by Atlas Air.

Jack said she found out about the cancellation when she tried to check in online.

“People that are on vacation just now have to just finish their holiday, enjoy their holiday, because they will be guaranteed a flight back home,” she said.

William Andrews, who was also flying back to Glasgow, said he comes to the US about once a year.

“For people coming on holiday, it’s a shame for them ‘cause they’ll be cancelled. But we’re ok; we’ve had our holiday, and we’ll get home,” said Andrews.

Thomas Cook’s collapse led to the cancellation of 41 flights scheduled between September 24 and October 12 at Orlando International Airport.

The airport said that during the last 12 months, Thomas Cook operated more than 900 flights at MCO, carrying approximately 267,000 passengers and a fleet of Airbus A330-200 aircraft.

British citizens who are affected are being told to call +441753-330-330 or visit thomascook.caa.co.uk for help getting home.