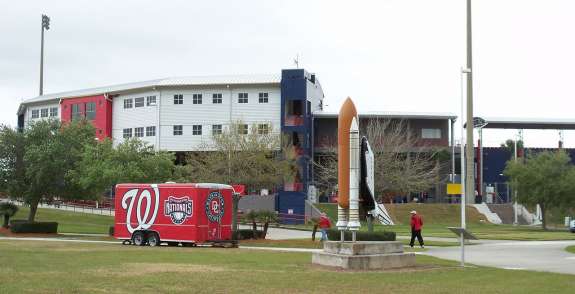 Brevard County Commissioners are voting Thursday on a lease agreement to bring youth sports tournaments to Space Coast Stadium. Under the 20-year agreement, U.S. Specialty Sports Association will move its headquarters to Brevard.

“They will make a 250 thousand dollar a year annual payment to the county for the use of the facility. Those funds will be put back in an account that will eventually be used for capital improvements down the road,” said Commission Chairman Robin Fisher.

Fisher said the association also guarantees at least 75 thousand hotel night bookings in its first year. Brevard County would reimburse the sports association up to $10 million for stadium retrofits. That money would come from tourist tax dollars.

Changes to the stadium would start after the Washington Nationals, the Major League Baseball team currently using the stadium, move in 2016 or 2017.

Commissioner Trudie Infantini thinks this is a bad deal for the county.

“If this was such a profitable line of work to do, why don’t they buy the stadium from us? Why don’t they rent it from us and pay us a fair rental value on it?” said Infantini.

She would rather the county spend money to build a convention center. She’s also worried about what will happen to the more than one hundred people who currently work at Space Coast Stadium.

It’s unclear how the new lease agreement would impact the Manatees, a minor league baseball team that calls the stadium home.