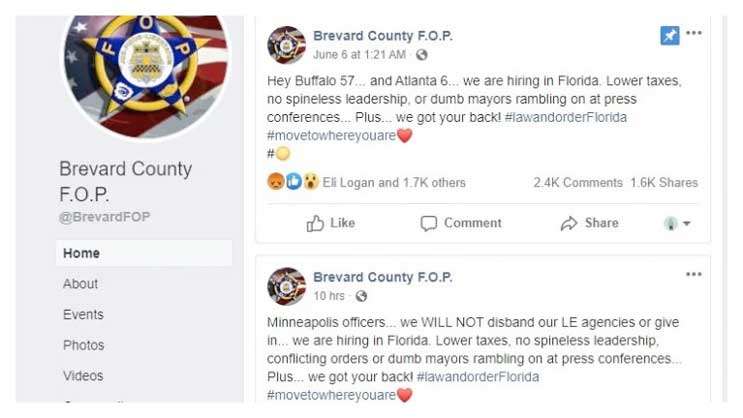 A sheriff’s deputy has been suspended over social media posts inviting officers involved in violent incidents during protests to come work in Brevard County.

He suspended Bert Gamin- a lieutenant who has been in the Sheriff’s office for 27 years- and ordered an internal investigation into his actions.

Gamin is the president of the Brevard chapter of the Fraternal Order of Police. One of his posts on the FOP’s Facebook page over the weekend singled out officers from Atlanta and Buffalo who have recently resigned or been disciplined, saying, “we are hiring in Florida” and “we got your back” with the hashtag #LawandorderFlorida.

Two officers in Buffalo have been charged with assault after a video showed them shoving a 75-year-old protester to the ground. Six officers in Atlanta are facing charges over their involvement in the arrest of two college students.

A separate post extended the same invitation to police officers from Minneapolis.

The posts have been deleted from the FOP Facebook page, along with an apology Gamin posted on Monday where he said the posts were insensitive and wrong.

“I let my emotions and frustration get the better of me as a result of all the continually negative media portrayals of law enforcement,” he wrote.

Ivey was quick to distance his agency from the posts, saying the FOP doesn’t represent the sheriff’s office or its views.

He said he’s angry about the impact the posts have had on law enforcement agencies.

By Tuesday morning the apology had also been removed from the FOP Facebook page, but hundreds of people have continued to post comments about the original post.