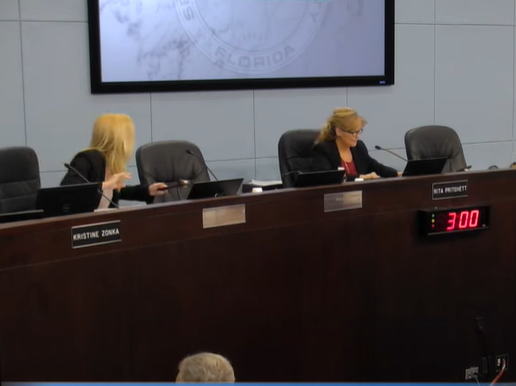 On Tuesday, Brevard County commissioners agreed to table a discussion on whether to permit 24/7 alcohol sales in unincorporated Brevard County.

The ordinance proposed by District 3 Commissioner John Tobia would eliminate the current 2 a.m. cutoff time. Initially it was welcomed by other commissioners and law enforcement, and on March 23, the Board voted 5-0 to adopt the ordinance. But during Tuesday morning’s Commission Meeting District 2 Commissioner Bryan Lober’s raised concerns.

Lober said he was contacted by several constituents from in and outside his district, all concerned over what the new ordinance could do for road safety, particularly school children and families during rush hour.

“One of the concerns was that if we have folks getting out when school buses are picking up kids, and when folks are driving kids to school, it’s probably not the best time to have drunks on the road,” Lober said.

He proposed an amendment to end sales at 4:30 a.m. on school nights, to prevent drunk drivers from being on the road during early school bus morning hours.

Tobia said anecdotal evidence would not be enough for him to accept the amendment and demanded Lober “came prepared” with “empirical evidence” to support his claims.

Tobia said that the alcohol 2 a.m. cutoff hour was arbitrary and that the freedoms afforded by this new ordinance would make cops’ jobs easier, and potentially bring more revenue for some businesses.

“It’s not a mandate, it’s just an opportunity for flexibility,” Tobia said. “My goal as a county commissioner is to pull back government as much as possible.”

District 4 Commissioner Curt Smith called for a pause on the vote.

“I don’t see a reason that we have to do it today,” Smith said. “We can wait two weeks for [Lober] to come up with something non-anecdotal.”

After a few passes of the gavel and some confusion, the vote was postponed for May 4.

Lober said he will try to produce evidence and invite constituents to testify.