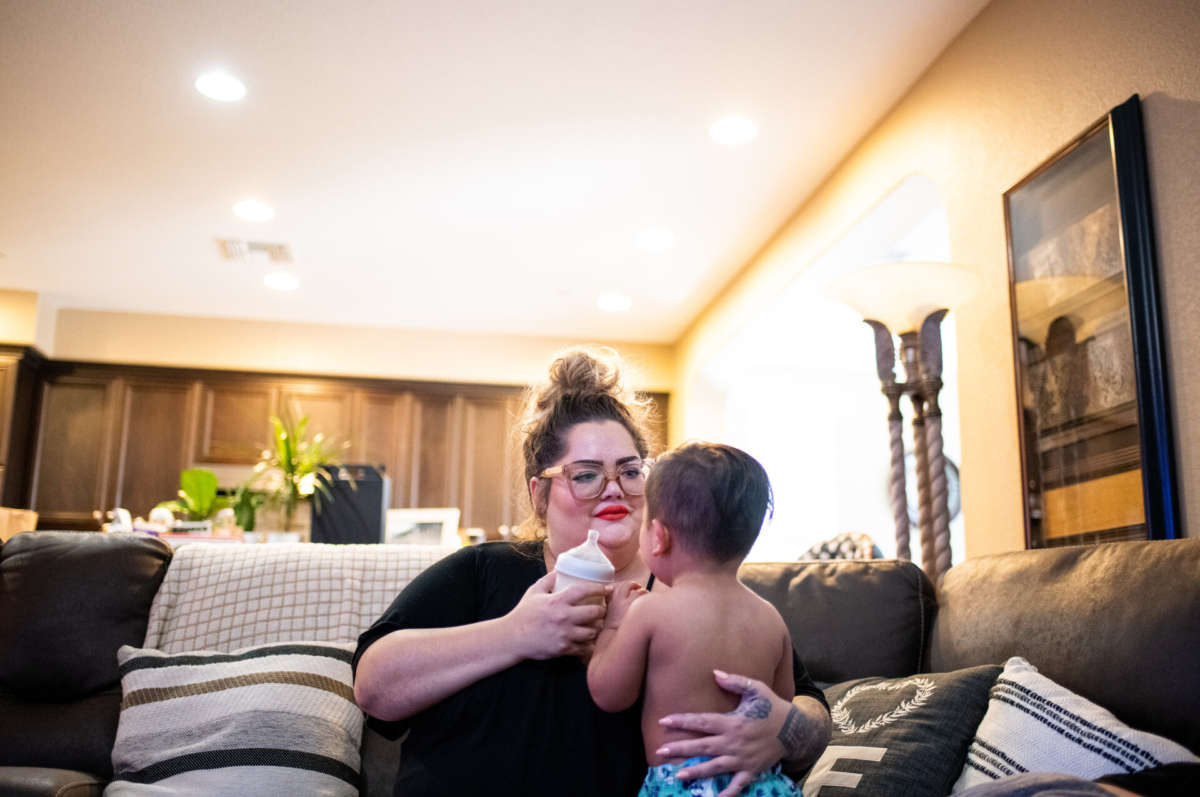 Johnson gives River a bottle in her home in Discovery Bay. Family members spent isolation together there this summer, after getting sick with COVID-19. Everyone has since recovered.
Image credit: Beth LaBerge

“We were so careful,” says Alysha Johnson, a resident of Discovery Bay, east of San Francisco. “I’m a germaphobe. When this whole thing happened, we didn’t leave the house for six months.”

Johnson was crushed when her toddler caught COVID-19 at a summer play group recently.

“It was a pretty big deal how sick he got,” says Johnson. “It wasn’t just a little sniffle.”

Her 2-year-old suffered a sore throat, a cough and a 104-degree fever. The bout lasted more than a week and sickened Alysha Johnson, her boyfriend and her sister — all of whom had been vaccinated against COVID-19.

“It felt like a really bad sinus cold,” Johnson says. “I felt exhausted. I lost my sense of taste and smell. That was the most bizarre sensation.”

Johnson is relieved her vaccination likely protected her against a more severe case of COVID-19. But the fact that kids are transmitting the coronavirus to family members is unnerving many parents all over the U.S. and putting extra stress on many households as children head back to school.

In the two weeks leading up to classes, 3,255 students tested positive for the coronavirus in the Los Angeles Unified School District. Last week, more than 3,000 students and staff members in Florida’s Brevard Public Schools had to go into quarantine. And in Hawaii, some schools are pulling the plug on in-class learning entirely, returning to remote versions.

Nationwide between Aug. 5 and Aug 12, about 121,000 children tested positive for the virus, according to the American Academy of Pediatrics and the Children’s Hospital Association. That’s a 23% increase over the prior week.

“Time and time again we’re seeing kids return to school and then come home — either after an exposure or sick themselves,” says Nicole Braxley, an emergency medicine physician at Mercy San Juan Medical Center in Sacramento. “The virus sheds for a couple of days before the patient has symptoms. Entire families are suddenly exposed.”

“It’s already started,” Chenard texted us after receiving the email, including a tearful emoji in her message.

She knows firsthand how much a mild pediatric case can upend family life. About a month ago, Desmond started to lose his appetite. He quickly developed a fever. Chenard grimaces, remembering the moment the family learned Desmond had tested positive for the coronavirus. The news shattered the 8-year-old.

“He just burst out into tears,” she says.

The family canceled a long-awaited summer trip to Lake Tahoe and instead isolated at home.

Chenard, a 49-year-old college administrator, started making calls. She notified her son’s summer camp. They suspended all activity. She alerted the public swimming pool. She fretted about whether to notify the organizers of a summer music festival. The hardest call was to a friend who had just had an organ transplant.

“The exposure felt like a moral failing,” says Chenard.

Fortunately, her son’s case was mild. His fever broke the same day it started.

“Desmond was only sick for eight hours, but I spent 45 hours on notifications alone,” Chenard says. The child’s quarantine — and the rest of the family’s subsequent isolation — also required both parents to juggle work and child care. Fortunately, neither parent caught the virus. Chenard feels grateful she and her husband are fully vaccinated.

Some families are not so lucky.

First the 11-year-old, then dad, then mom

Jace Garcia caught COVID-19 playing soccer with a friend in Sacramento. The virus struck the 11-year-old in the middle of the night. Jace woke up vomiting.

He curled up in the bathroom around the toilet. Body aches racked his calves, feet, chest and head.

“Everything was just squeezing that part of the body towards the bone,” Jace says.

His fever spiked to around 104 degrees. He shivered under a pile of blankets. Even playing video games did not offer relief.

“Every time I would click down, I would get a tingling sensation in my hand,” Jace remembers. He tossed the controllers aside. “I felt dizzy.”

The only advice doctors offered was to try to keep him hydrated.

“As a parent, you feel helpless,” says Rico Garcia, Jace’s dad. “It was like the longest few days of my life.”

Rico Garcia worried he might contract the virus too. Each morning he anxiously took a rapid test. He hoped the vaccination he got would offer complete protection, but he caught a vaccine breakthrough case. On the fourth morning, Rico Garcia tested positive for the coronavirus. Within 24 hours, symptoms set in.

“It felt like a terrible head cold,” Rico Garcia says. “My brain was foggy. I couldn’t think straight.”

Then he lost his voice. He called in sick to the radio station where he’s a DJ.

“My first sip of coffee was amazing,” Rico Garcia remembers. “My ninth and tenth sip tasted like hot water. In the snap of a finger, my sense of taste and smell was gone. I went as far as to cut a lime open and bite into it — and tasted nothing.”

Eventually his ex-wife also caught the virus from their son. She’s a teacher and now isolated. Jace is still fighting a lingering cough and congestion. He’s also missing the first 10 days of sixth grade.

Breakthrough cases are on the rise nationally

Epidemiologists say breakthrough cases are on the rise all around the U.S., though estimates vary widely because tallies depend on the degree of community masking, testing availability and the level of virus circulating regionally.

“Symptoms can be absent or so mild in the vaccinated, many dismiss this as a cold or seasonal allergies,” Dr. Peter Chin-Hong, a University of California, San Francisco professor and infectious disease specialist, notes in an email. “In other words, you don’t know what you don’t know.”

An internal presentation from the Centers for Disease Control and Prevention from late July estimated that about 35,000 people a week were contracting a symptomatic breakthrough infection in the United States. In the week leading up to July 24, about 384,000 people across the country tested positive for the coronavirus, which indicates that about 9% of new cases were likely breakthrough infections. Chin-Hong says this is probably an underestimate of the true total but it shouldn’t undermine the value of vaccines in people’s minds.

“At the end of the day, one can say why focus on breakthrough infections, as the vaccines are really meant to prevent people getting serious disease and dying — which they are still spectacular at,” he says.

It’s still rare for a child to die from COVID-19 or to experience a case severe enough to require hospitalization. In states where data are available, less than 2% of pediatric cases required hospitalization and less than 0.03% were fatal.

Yet, as schools open and more students test positive for the virus, parents and teachers find themselves trying to weigh the risks. Psychologically, the increased isolation of remote learning during the pandemic has been hard on many families and especially children — a fact underscored by the spike in U.S. emergency room visits by kids for mental health issues last year.

“One element of their well-being is being with peers — learning, stretching, struggling, growing and connecting,” Trotter says.

She recommends that parents ask doctors and teachers lots of questions to help families weigh their personal risks and make sure schools are taking steps to keep their children safe. Schools can mitigate transmission of the coronavirus through the widespread use of masks, vaccination of faculty and staff, and better air filtration and ventilation inside buildings. Simply opening both a window and a door to create a cross-breeze can help make a difference.

Before her son started middle school last week, Trotter fired off a few emails to school administrators. The responses helped ease her mind. She says an in-person classroom experience is the right choice for her son — at least for now. She’s watching the data closely.