Monday, May 10, 2021 by Matthew Peddie and Danielle Prieur (WMFE)
ShareTweet 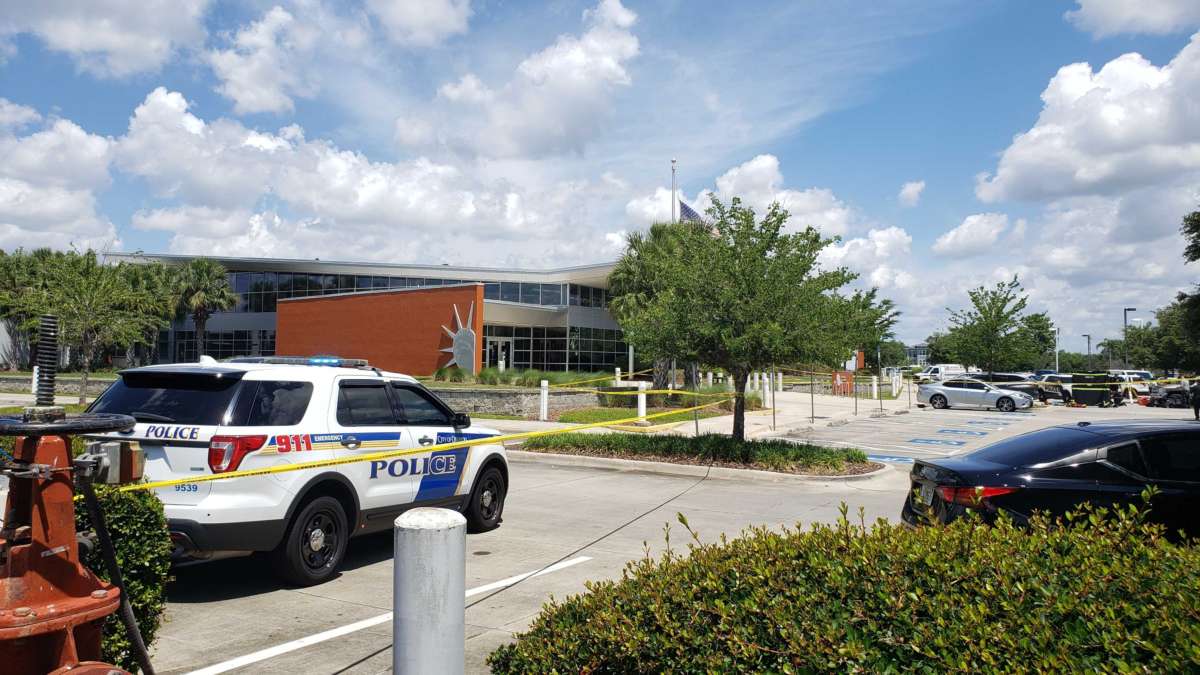 An Orlando Police Department car parked in front of the USCIS office in Orlando, where police are investigating a homicide. Photo: Matthew Peddie, WMFE

Orlando Police say the fatal shooting outside the US Citizenship and Immigration Services Field Office Monday morning was “domestic in nature.”

Police say the man who was killed was with a female companion who was not hurt in the confrontation. The suspect is her ex-husband.

The gunman is accused of opening fire on a man and woman as they walked into the USCIS building east of Orlando.

“The male fell to the ground and was pronounced deceased at the scene. The female was able to escape.”

The gunman fled the scene, prompting a car chase that ended in Kissimmee, where the gunman was taken into custody.

OPD Lt. Diego Toruno talks to media about a homicide at the USCIS building in Orlando. Photo: Matthew Peddie, WMFE

“A patrol officer, obviously responding to the call, heard the description, found the suspect vehicle in the area,” said Toruno.

Police did not elaborate on what the man and woman were doing at the building.

Bonnie Brandao, was waiting at the UCSIS office for a citizenship test when she heard the shooting.

“I already did my test, and I was approved, so I was waiting for them to call me, and we heard gunshots, and then people were screaming, everybody was just running for cover.”

“I was scared,” says Brandao, who is from Cape Verde.

“I’ve never been in a situation like that before. I’ve never even heard gunshots before, so it was scary.”

“I probably was kind of naive because I thought nothing like that would ever happen at immigration of all places,” added Brandao.

“When they were running for cover, people were trying to go over the desks, I was even afraid to do that because it’s immigration- you don’t want to do anything stupid at immigration.”

Brandao says the building was locked down for about half an hour.

Jesper Helt, who’s from Denmark and lives in Cocoa, says his wife had driven their daughter to the office for her citizenship interview. Then she called to tell him she’d just witnessed a shooting.

“I got a call from my wife who was just completely besides herself. This must have been seconds, minutes after the shooting. I think she had just witnessed it.”

Helt said after that call he drove into Orlando to meet them.

“It’s just, it was supposed to be a day of celebration, and then the next thing you know this is happening. On the one hand it’s unreal and on the other hand it’s not.”

After reading about a spate of shootings across the country over the weekend, Helt said sooner or later he knew one would hit close to home.