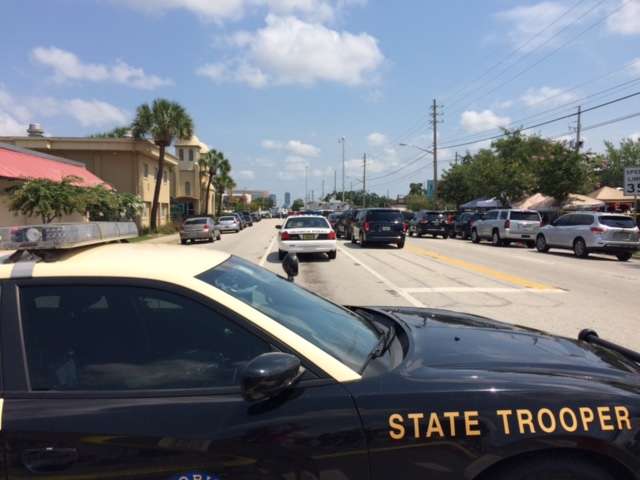 The vigil tonight for victims of the Pulse night club shooting has been moved from Lake Eola’s band shell to the Dr. Phillip’s Center for the Performing Arts. The area has become a makeshift memorial for the victim’s of the worst shooting in U.S. history.

The health of the most critically wounded victims in Sunday’s shooting is improving.

Orlando Regional Medical Center got 44 of Sunday’s shooting victims … the hospital performed 26 surgeries Sunday and will do another 9 today and tomorrow.

Dr. Joseph Ibrahim is the head of trauma medical director for the hospital.

“11 total went to the ICU at the time of the incident,” said Dr. Joseph Ibrahim, the trauma medical director for Orlando Regional Medical Center. “Five of the 11 are now off the ventilator, they are obviously much improved. The remaining six are significantly improved.”

Of the 49 victims who died in the shooting, 9 died at Orlando Regional Medical Center.

The FBI is looking into the past of the Pulse nightclub shooter.

FBI Director James Comey briefed media this afternoon. “There are strong indications of radicalization by this killer and of potential inspiration of foreign terrorist organizations.”

Investigators continue to dig into the personal effects of the shooter – including cell phones and computers. The FBI served a search warrant at his home in Ft. Pierce last night.

During the attack, the shooter called 9-1-1.

“During the calls he said he was doing this for the leader of ISIL,” said Comey,  “but he also appeared to claim solidarity with the Boston bombers and solidarity with a Florida man who died as a suicide bomber in Syria.”

Comey says there is no indication that he was a part of any terrorism network or working with someone.

The FBI Director promised transparency during the investigation. He declined to use the shooters name in the briefing choosing not to publicize his name further.

Comey says he hopes people will turn their anxiety into awareness, and report and suspicious activity to law enforcement.

Orlando Health has treated 44 victims from the Pulse night club shooting this weekend. Nine of them died in the hospital. Six have been discharged and 29 are still in the hospital.Surgeons have performed 26 surgeries and six more are scheduled for today. Five of the patients are in grave condition.

The hospital says all its facilities are now fully operational and with 600 units of blood, they have more blood on hand than usual.

Orlando is still reeling from the largest mass shooting in US history. It happened around 2:00 am Sunday morning at the Pulse gay nightclub when a lone gunman opened fire, killing 50 people and wounding dozens more. The gunman, Omar Mateen of Fort Pierce, was killed several hours later in a shootout with police after a hostage standoff inside the club.

The names of the victims are slowly being released as next of kin are notified, but as of this hour many families are still waiting to hear about their loved ones. The City of Orlando has released the names of 21 victims so far on the website cityoforlando.net/victims.

“We have confirmed the ID of 48 of 49 victims,” said Banks. The shooter was also killed, but is not included in the victim count. “The last ID confirmation is pending right now so we anticipate having that name shortly.”

Orlando Police Chief John Mina provided additional details of the shooting. After exchanging fire with an officer at the nightclub, additional resources were called in.

“Those additional officers made entry while the suspect was shooting and engaged in another gun battle with the suspect,” Mina told reporters. “[That] forced him to stop shooting and retreat to the bathroom where he had several hostages.”

The decision was made to breech the bathroom.”The information that I received from my team is that loss of life was eminent,” said Mina.

Across Orlando, vigils were held and elected leaders spoke out about the tragedy. Florida U.S. Sen. Bill Nelson said the FBI was investigating shooter Omar Mateen’s life in Fort Pierce.

The FBI confirmed that Mateen called 911 before the shooting and pledged allegiance to the Islamic State, or ISIS.

Central Florida’s Muslim community is condemning the Sunday morning mass shooting. Orlando Imam Muhammad Musri says he is shocked and saddened by the tragedy: “He’s not a Muslim. What he did is not Islamic, not acceptable under any circumstances. We reject his twisted ideology, and we feel once again this country has been victimized by someone who is crazy, who lost his mind.”

Governor Rick Scott was also in Orlando. He called the shooting an act of terror and expressed shock over the events. Scott has declared a state of emergency for Orange County.

Meanwhile, the Orlando community came together to offer support. Multiple vigils were held across the city, and the nation. And after Central Florida blood banks put out a call for blood and plasma donors, blood banks facilities were filled to capacity. Some have asked people to make appointments to come back this week. OneBlood officials say there are still in need of blood.

Supporters also gathered at The Center in Orlando, a LGBT support organization. Gina Duncan, of Equality Florida, was there. She says the news came as a shock.

“You hear about these things on the news but you never think it can happen in your own backyard much less this many people affected,” said Duncan. “This many people murdered, in a city that’s known to for being welcoming for all people.”

More vigils are planned for today, locally and nationally.