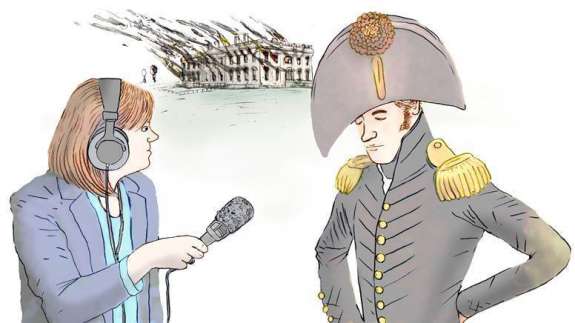 Two hundred years ago this week, during the War of 1812, invading British troops destroyed two of the nation’s most important buildings — the White House and the Capitol. The war had started over issues of tariffs and the taking of American sailors on the high seas; by the summer of 1814, British fighters were in middle of a campaign burning and looting along the coast.

Unfortunately, there was no recorded sound from that time, so for help in our storytelling we imagined how NPR might have covered the burning of Washington, D.C., had we been on the scene two centuries ago. This is definitely one of the stories that you’ll want to listen to — click the play button above to hear it.

This reenactment of the siege is based on Steve Vogel’s book, Through the Perilous Fight: From the Burning of Washington to the Star-Spangled Banner, the Six Weeks That Saved the Nation.

Our cast of characters: